While oil and natural gas companies may be grappling with the effects of current commodity prices, Pennsylvania natural gas producers have proven to be astonishingly resilient, producing a record 4.6 trillion cubic feet of the fuel last year. Making this accomplishment even more impressive is that this rise in production – a total nearly five times what was produced in the state in 2011 – occurred despite fewer wells being drilled, according to the 2015 Oil and Gas Annual Report from the Pennsylvania Department of Environmental Protection (DEP).

According to the report, hydraulic fracturing (fracking) combined horizontal drilling techniques employed in the state’s shale plays – most notably, the Marcellus – are credited for the increase in natural gas production. As we’ve shown before, continued innovation in fracking and other techniques used in production have greatly increased domestic oil and natural gas production, even as fewer wells are being drilled. These innovations have improved production decline rates from wells, meaning fracked wells are lasting longer and producing more, as well as increased profitability for producers overall. In Pennsylvania specifically, fracking and horizontal drilling in shale plays has made the state one of the top suppliers of natural gas in the nation. As the report points out: 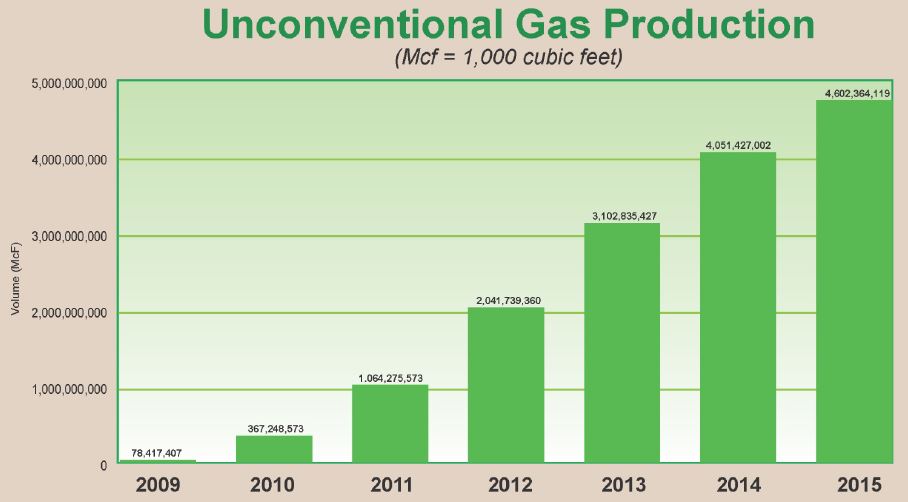 In addition to improving natural gas production, the report also notes that increased shale production has provided a number of benefits to both Pennsylvania and the U.S. as a whole. According to the report:

“Since 2008, Pennsylvania’s natural gas production has increased dramatically, resulting in increased energy security due to less dependence on fossil fuels from other parts of the world.”

“Increased shale gas production has resulted in a number of significant benefits including less expensive energy costs and improvements to Pennsylvania’s air quality as a result of the increased use of cleaner burning natural gas.”

As if providing a record amount of production, environmental benefits and increasing U.S. energy security wasn’t enough, the report also found that natural gas production in Pennsylvania has become increasingly safer. DEP notes that in order for production to take place, oil and gas sites across the state must undergo rigorous inspection to ensure environmental safety throughout the development process. As the report mentions, the total number of conventional, unconventional, and well site inspection more than doubled from over 14,650 in 2009 to more than 34,600 in 2015.

Overall, this report confirms what we’ve already known – not only is hydraulic fracturing (along with horizontal drilling) allowing for record breaking oil and gas production levels, it has also helped increased our national energy security, improved air quality and saved American families money on energy bills. Further, this report confirms what the Environmental Protection Agency (EPA) found in its landmark report last year: fracking does not have a “widespread, systemic impact” on water supplies in Pennsylvania or anywhere else in the country.