A new U.S. Department of Energy (DOE) study adds to an already long list of reports findings low methane leakage rates from natural gas systems. Using data from a comprehensive 2015 Environmental Defense Fund (EDF) report on the Barnett Shale region in Texas to synthesize emissions on a national scale, the study finds the leakage rate from the natural gas supply chain is 1.7 percent of production,

“The natural gas supply chain emits 0.29 grams of CH4 per megajoule (MJ) of delivered natural gas. This is equivalent to a CH4 emission rate of 1.7%. Gathering systems, production pneumatics and unassigned emissions are the top three contributors to these emissions.”

Though this leakage rate found in this study is a bit higher than what was reported in the latest U.S. Environmental Protection Agency (EPA) Greenhouse Gas Inventory (1.4 percent), the report’s findings fall in line with numerous other studies from respected sources that have also found methane leakage rates between 1.2 and 1.9 percent, which is well below the 3.2 percent threshold for natural gas to maintain its climate benefits.

But even though the study finds low emissions, it is worth pointing out that it likely overestimates the leakage rate based to the fact that it extrapolates so-called “super-emitter” data from the EDF study it used (Zavala-Araiza et al., 2015) on a national scale. From the report,

“Zavala-Araiza et. al (2015) used data from a basin-wide measurement campaign to demonstrate that total site-level emissions are higher than the sum component emissions at producing sites. … We used these data to account for ‘unassigned’ production emissions.”

This is a less than ideal method, considering the authors of Zavala-Araiza et al. specifically sought out so-called “super-emitters” for their site-based study, stating plainly their work was “biased toward high-emitters,” or as this study refers to them, “unassigned emissions.”

This is a bit misleading considering such high-emitting sites are the exception rather than the rule. Past EDF studies have found “super-emitters” make up at just two to four percent of well pads.

All told, this blanket extrapolation of “unassigned” emissions data from the anomalous high-emitting sites that were sought out for Zavala-Araiza et al. accounts for nearly one fifth of methane leakage found in the new DOE report,

“In particular, ‘unassigned’ emissions that were measured at the site level (in Zavala-Araiza et al.), as opposed to component-level emissions measured directly at the device level, account for 19% of supply chain methane emissions.”

The following chart from the report further illustrates how significant the extrapolation of these “unassigned emissions,” as they are represented in the light blue bar to the far left. 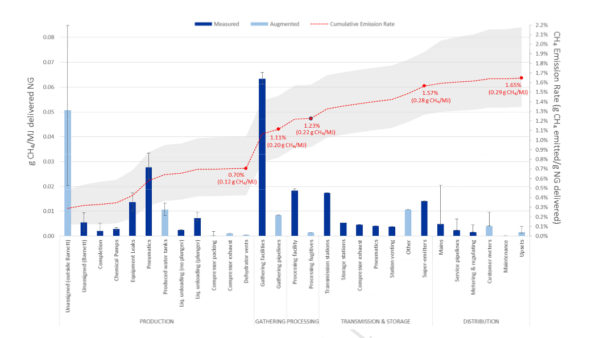 To their credit, the researchers admit that their method of estimating “unassigned emissions” is less than ideal and presents a major data gap that should be addressed by further research,

“Our most significant data translation challenge was the adaptation of production site measurements in the Barnett region to arrive at unassigned emissions.”

“The inclusion of unassigned emissions makes the bottom-up compilation of emission sources more complete, but is a source of uncertainty that points to opportunities for further research.”

It is also worth noting that the estimated emission totals from gathering stations in the new DOE report (.065 grams per megajoule of methane leakage) were taken from the same EDF studies that EPA used to drastically upwardly revise boosting and gathering emissions in its latest Greenhouse Gas Inventory — upward revisions EID has previously called into question. Coupled with the debatable “unassigned emissions” data, this could explain why this study found higher leakage rates than the report it drew from.

But the bottom line remains: This is just the latest in a long list of research —including studies from the University of Colorado at Boulder/NOAA, MIT, the University of Maryland, Carnegie Mellon and Cornell University — that find methane leakage from natural gas systems is well below the threshold for natural gas to retain its climate benefits. 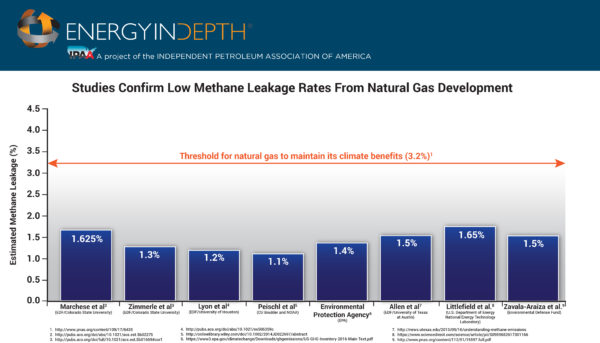 Methane emissions from natural gas infrastructure have actually fallen since 2005 at the same time natural as production has skyrocketed by 42 percent — just one of the many reasons costly regulations on the oil and gas industry are a solution in search of a problem.