A fringe group of anti-fracking activists and former presidential candidate Senator Bernie Sanders spent the last few weeks trying to convince the Democratic National Convention (DNC) to add an all-out ban on fracking to its official 2016 platform. But a fracking ban doesn’t align with the beliefs of a majority of Democrats, which the DNC acknowledged at the end of June and again last week when they chose to disregard these absurd demands. The response from activists?  A whole lot of “crap” – and we’re not talking in the figurative sense.

Activists led by Food and Water Watch took to the streets of Philadelphia—where the Democratic National Convention will occur later this month—and placed fake poop under the fiberglass statues of donkeys that can be found in multiple locations around the city. 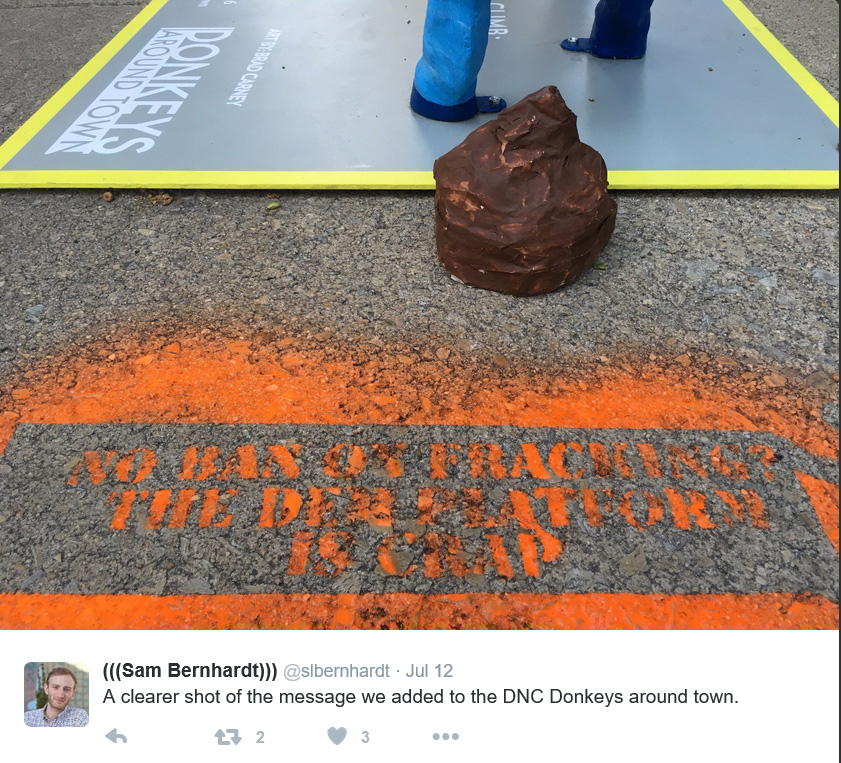 “We’re really grateful that the Democratic National Committee brought us these beautiful fiberglass sculptures. And we thought there was something missing from the artwork. So we designed these donkey craps, and a little message to accompany them, to make sure to send the message that the Democratic Party platform, without a ban on fracking, is just that. It’s donkey crap.”

According to the Associated Press:

“Organizer Sam Bernhardt says citizens oppose the controversial drilling technique that uses high-pressure water and chemicals to extract oil and gas from deep underground rock. He says the Democratic Party could have called for a ban on the practice but failed.”

But neither of those statements actually hold up to scrutiny. In fact, in oil and gas states like Pennsylvania, where these “crappy” protests took place Democratic voters showed the exact opposite in the primaries when anti-fracking candidates were defeated by double digit margins across multiple major elections. And that was after Reuters declared the primary in Pennsylvania would “be a mini-referendum on the future of the state’s fracking industry.” The article went on to explain:

“The outcome of the presidential and senate primaries in a state that now the second biggest natural gas producer in America after Texas may reveal how residents of heavily drilled areas feel about an industry suffering from a decline in oil and gas prices.”

And it did: citizens showed they support the industry and fracking in Pennsylvania.

Further, the position to ban fracking is not something that has been supported by prominent Democrats. As E&E News reported last week, current presidential hopeful Secretary Hillary Clinton is amongst leading Democrats who do not support a ban:

“The notion that we’re going to keep it all in the ground is unrealistic…We are still a very heavily fossil-fuel dependent world.”

At the end of the day, stunts such as these are just that. They are political moves that are not supported in science. The DNC has acknowledged that by refusing to give into the demands of a few fringe activists over the desires of the majority of its party.