Despite Cautionary Tone, UN Report Finds Risks From Fracking Are Small and Manageable

A new United Nations (UN) report on the United States’ shale gas revolution — and the prospects of it being duplicated in other parts of the world — has generated a few cautionary headlines since being released last Thursday. UPI’s “Shale Gas No Panacea, U.N. Report Finds” and the Dallas Morning News’ “Amid Permian ramp up, U.N. cautions against fracking getting too big, too fast” are notable examples.

But as is often the case with reports of this nature, these headlines don’t reflect what the report actually found. Though the UN Conference on Trade and Development report notes the U.S. shale revolution has generated “major concerns” on the environmental front — specifically manageable water and induced seismicity risks that have been exaggerated and endlessly amplified by the “Keep It In the Ground Movement” — the Dallas Morning News correctly reports that the risks identified in the report are “slim.”

And seemingly more worthy of the headlines is the fact that the report acknowledges shale gas is a useful “bridge fuel” that can significantly lower carbon dioxide emissions, the undisputed top priority in continued global efforts to mitigate climate change. From the report:

“With regard to CO2 emissions, the Intergovernmental Panel on Climate Change (2014:7) suggests that ‘GHG emissions from energy supply can be reduced significantly by replacing current world average coal-fired power plants with modern, highly efficient natural gas combined-cycle power plants or combined heat and power plants, provided that natural gas is available, and the fugitive emissions associated with its extraction and supply are low or mitigated.”

Case-in-point: U.S. Energy Information Administration has credited fuel switching to natural gas for electricity generation as the chief reason the United States has reduced CO2 emissions 13 percent since 2005. A new EIA report released this week also shows that U.S. power sector CO2 emissions are at their lowest levels since 1987, due largely to natural gas. Global CO2 emissions, by comparison, have increased 50 percent since 1990. Though the report notes that methane emissions from shale gas development are a concern, the fact that U.S. natural gas system methane emissions have declined three percent since 2005 at the same time natural gas production has increased 49 percent is a testament to the fact that emissions can be mitigated, maintaining natural gas’ clear climate benefits over other traditional fuels.

The report identifies water contamination and induced seismicity as the chief environmental concerns associated with shale gas development, but notes the risk level is low for each.

Confirming the findings of no fewer than two dozen groundwater reports published since 2010, the UN report states that “the risk of aquifers being contaminated by hydraulic fracturing operations appear to be low in comparison with the number of operations carried out,” also explaining that:

“The reason for this is that hydraulic fracturing generally takes place at several kilometres in depth, while aquifers are generally located at a much closer distance to the surface (between 100 and 500m maximum). Moreover, fractures generated by the stimulation of source rock are generally a few hundred metres long.”

The UN report actually emphasizes that water use is a larger concern than water contamination, especially for prospective shale gas development areas located in arid climates. But the report also provides proper perspective by noting other types of energy development are far more water-intensive than hydraulic fracturing, as the following graphic from the report illustrates. 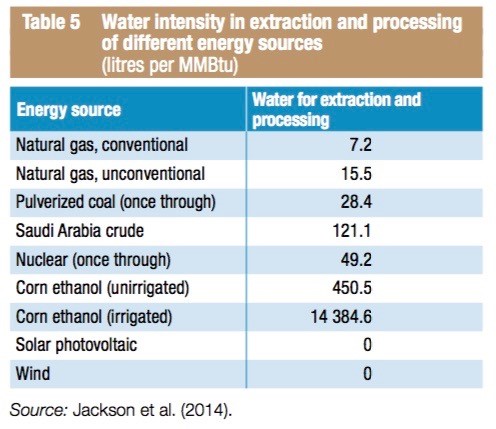 The UN report also notes that a vast majority of induced seismic events have been inaccurately linked to the hydraulic fracturing, and are actually attributable to wastewater injection, a separate oil and gas process that is not exclusive to fracking. From the report:

“Most studies on the United States shale gas sector consider the reinjection of wastewater as the main source of increased seismicity.”

As the Dallas Morning News reported:

“But both the U.N. and the Academy of Medicine, Engineering and Science of Texas reports say that while fracking itself can cause seismic activity, all the recorded human-induced earthquakes related to the oil and gas industries stem from the disposal of wastewater byproducts into deep wells, a process that isn’t unique to natural gas production.”

The report concludes that the pioneering accomplishments of shale gas developers and regulators in the U.S. could pave the way for other countries that seek to develop their own industries. “Other countries holding shale gas resources may wish to emulate the United States model,” the report noted, continuing to say that:

“The development of shale gas activities may be viewed as a way to reduce the natural gas import bill and increase energy independence. It may also be considered a vehicle for direct and indirect job creation through the expansion of support service sectors, as well as the revitalization of some stagnant sectors.”

In the United States, the shale gas (and oil) revolution has sent the U.S. from a position of energy scarcity into its current role as “the undisputed leader of oil and gas production worldwide,” according to International Energy Agency Director Fatih Birol, creating millions of jobs while enhancing our energy security, lowering energy bills and allowing for nine consecutive years of economic growth, even as we continue to reduce greenhouse gas emissions.

“[W]e are not saying it’s good or bad, just look at the conditions and the region (where) you want to explore this resource, and then you can determine whether you can do it or not.”

The UN report identifies legitimate risks that come along with shale gas development. But the fact remains that all forms of energy development come with risks. And in the case of the U.S. shale gas revolution, the manageable risks are far outweighed by fracking’s numerous benefits.