But if their last fundraiser is any indication, their efforts aren’t exactly popular with Ohioans. Take a look at the recent $28 per plate CELDF fundraiser in Athens, Ohio, which only had two attendees and three people interested, according to Athens anti-fracking Facebook page. 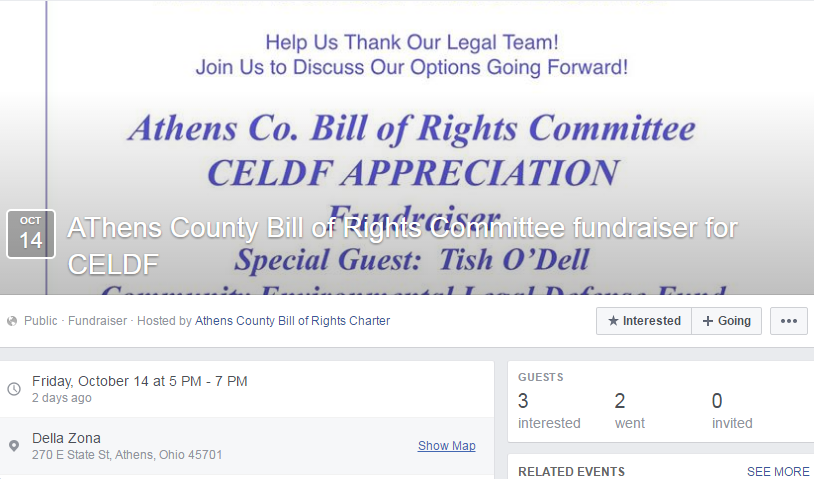 It’s not difficult to see why considering that the group’s Ohio organizer Tish O’Dell was caught saying, “If we know the law is wrong, why are we obedient?”  In other words, if you do not agree with a law—any law—the recourse is simply to disobey that law.

While they would like folks to believe their “local” efforts are pure, in reality CELDF and its lawyers are nothing more than a marketing machine focused on lining their own pockets. Since they got involved in local control issue, CELDF’s coffers have swelled to over $1.4 million in assets. However, CELDF’s most recent 2014 tax filings showed that their failed efforts are starting to hurt their checkbook as they lost $113,965 in contributions from the previous year.

One thing that we have learned as these 29 ballot measures have played out in Ohio is that CELDF continues to “tweak” its strategies in the hope that they can manipulate Ohio election laws and procedures. They are at it again, according to the Ohio University student paper,

Dick McGinn, chairman of the charter, followed O’Dell’s speech with a call to action for where the group could go next with its legal battles. To conclude the night, he encouraged the group to start a third new charter, fixing the points it was denied upon previously.

It has become abundantly clear that the only goal of these groups pushing “local control” measures is to cash in on Ohio taxpayers by any means possible, and with such outlandish ideologies like, “If we know the law is wrong, why are we obedient?”

It’s no wonder they can’t hold a successful fundraiser in Ohio. Still, this election season continues to prove that CELDF and the lawyers they work with are only in it for themselves.