DOE: Emissions and Energy Prices Would Rise, Employment Fall Under a Fracking Ban

A national fracking ban would have significant negative impacts on both the American economy and the environment according to a new report released by the Department of Energy. The report found that not only would a fracking ban have “devastating” economic impacts, the economic hit would come alongside increased emissions, negating the perceived benefits of such a policy.

The DOE’s assessment of the impact of a fracking ban was stark:

“The generational economic and national security gains made over the past 15 years would be effectively eliminated if the U.S. bans hydraulic fracturing technology use. Over just five years, America would shed millions of jobs, GDP would plummet by one trillion dollars and the U.S. economy would likely sink back into recession status. These costs would be devastating to the fragile economic recovery underway and force burdensome energy cost spikes on the American consumer.” 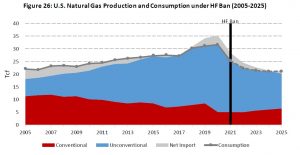 Emissions reductions may be the goal of a fracking ban, but that’s not what would happen.

Over the past 15 years, the share of electricity generated with natural gas has increased significantly, from 19 percent in 2005 to 28 percent in 2019, while coal has fallen from 50 percent of generation to 23 percent over the same period. This switch has been a “major factor” in power sector emissions decreasing 33 percent since their peak in 2007. 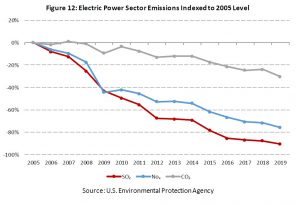 Decreased production would result in more natural gas imports and increased  prices. While some generators will continue to use natural gas, higher prices would force others to close. The report predicted that 111 GW of natural gas generation would retire under a fracking ban plan, compared to 53 GW of retirements without such a ban. 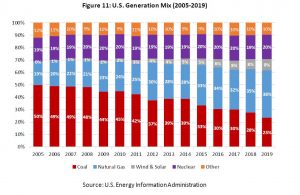 Though wind and solar would build up, natural gas is predicted to fall from fueling 40 percent of generation to 25 percent, resulting in an increased use of coal to maintain grid reliability: coal would rise from 19 percent to 33 percent, raising greenhouse gas emissions for the sector. As the report explains:

This would essentially negate the progress made to reduce sector emissions. For each type of emission, this increase would be the largest recorded in the past 15 years:

“In the first year of a ban, the country would see a year-over-year increase in carbon dioxide (CO2), nitrogen oxides (NOx), and sulfur dioxide (SO2) emissions with these emissions rising 16 percent, 17 percent, and 62 percent respectively. This outcome undermines the considerable progress the United States power generation sector has made in cutting emissions by 30 percent, 76 percent, and 91 percent respectively for CO2, NOx, and SO2 during the 2005 to 2019 time period.” 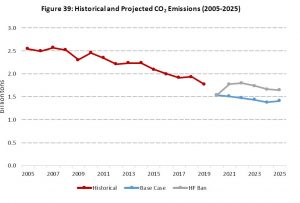 The economic impact of a fracking ban would be significant especially for consumers.

In addition to higher emissions, a fracking ban would also have deleterious economic impacts. Consumers would see gas prices rising above $4.20/gallon by 2022 and staying high until at least 2025 when a greater international supply of oil comes online. Higher prices for petroleum products such as gasoline and diesel would raise costs to end-use consumers by $318 billion in 2021 and $488 billion in 2022.

Consumers would also see higher electricity prices as utilities are forced to transition away from natural gas generation. Electricity costs would increase by more than $450 billion between 2021 and 2025, with residential customers facing the largest increase in cost (more than $180 billion, an average of $36 billion per year).

On top of high gasoline and electricity prices, consumers would also be paying more to heat their homes with natural gas. Over the first five years of a natural gas ban, residential consumers are predicted to face $105 billion in cost-increases, while industrial consumers would see cost increases of $201 billion over the same period.

All told, DOE estimates that consumers would see energy price increases of more than $2.8 trillion between 2021 and 2025, a figure equal to approximately 12.8 percent of current GDP:

“These costs, along with a decrease in U.S. oil and natural gas production, would have substantial economic impacts like lower employment and economic activity associated with extraction activities and their supply chain, lower incomes and purchasing power for households, and higher costs for businesses. All of these factors would contribute to a weaker U.S. economy.”

A fracking ban would result in significant jobs lost.

Using data that accounts for higher unemployment due to the pandemic, the study predicted how the ban would impact employment. They found that, because of the impact on energy production and prices, the labor market would add only 3.7 million jobs in 2021 with a fracking ban, compared to 7million without one. By 2024 and 2025, the gap would go to nearly 8 million fewer jobs each year. 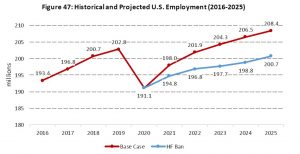 Industry supported the report’s findings, which they hope the incoming administration will consider as it determines policies that impact the future of the U.S. energy sector. According to Jennifer Pett, senior director of communications and public affairs at the Independent Petroleum Association of America:

What’s clear is that fracking—and the natural gas it produces—can be an important tool to grow the American economy, lower emissions, and boost employment and wages after COVID-19, as long as government policies do not shut it down. As the report concludes:

“While the U.S. economy may be temporarily down, the abundance of its energy resources, the resilience of its citizens and businesses, and its future economic opportunity, persist. A cornerstone of the U.S. economic recovery will be the abundance of reliable and affordable energy to enable U.S. manufacturing and other sectors of the economy to reignite the pre-pandemic boom.”

And as the American Petroleum Institute’s State of American Energy recently showed, the U.S. oil and natural gas industry is ready and able to be a part of the solution for improving both the economy and environment.