DOE Report Shows the Benefits of a Robust American Energy Industry, Shows Opportunities for the Future

The COVID-19 pandemic and accompanying shutdowns threw the American economy—and the energy industry—a curve ball this year, but domestic production will be a key part of the economy recovery. A new released by the Department of Energy (DOE) shows the benefits of increased domestic energy production and the opportunities to continue production in the future, something that would support a robust export market, power a resurgence of domestic manufacturing, and continue saving American families money.

According to the report, the pandemic has shown the crucial importance of a reliable domestic energy supply—and the benefits of abundant natural gas, which is used to make plastics. From the report:

“The global economic disruption associated with the 2020 COVID-19 pandemic has highlighted the complicated relationship between our energy supply, society’s economic strength, and humanity’s physical health. Supplies of oil and natural gas are critical to all of the sectors of society involved in fighting the virus – fueling first responder ambulances, powering hospitals, and providing raw materials for lifesaving drugs and the personal protective equipment needed by caregivers.”

These are also key drivers of employment. Thanks to surging natural gas production, the United States has a comparative advantage in the chemicals industry and companies are taking notice. In the past decade 343 projects involving $203 billion in investment have been completed, placed under construction, or are in the corporate planning stage. According to the report’s analysis, completion of these projects would create 757,000 permanent new jobs with an annual payroll of $57 billion and an annual economic output of $289 billion by 2025.

The report also shows how scientific and technological advances are expanding conventional resource development, most notably in shale fields like the Bakken, Eagle Ford, and Permian Basin. In addition to expanding production, new technologies are being developed to mitigate the environmental impacts of and to improve the safety of oil and gas production. According to the report:

“Industry is committed to reducing the environmental impact of oil and natural gas production while improving the efficiency and safety of operations through advances in technology and a committed health, safety, and environment focused culture.”

Through voluntary associations like the Oil and Gas Climate Initiative, industry is taking steps to minimize well pad footprints through multilateral drilling and many companies are joining programs to recycle water used in fracking and to convert their drilling rigs from diesel to electricity to reduce emissions. 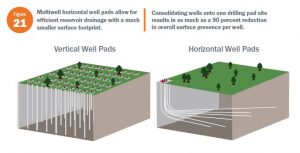 Meanwhile, injury rates have dropped 41 percent between 2008 and 2017 and are now 39 percent below the national private sector average.

In addition to worker safety, the Department of Energy highlighted the impacts of domestic production on national security. Because of increased production, much of it from shale formations in the Permian, Bakken, and Marcellus regions, U.S. petroleum imports in 2019 were the lowest they had been since 1996 and net petroleum imports were the lowest since 1954. This has real impacts on American security, as the report explains: 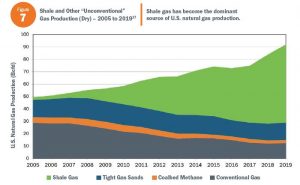 Continuing to see these benefits from domestic production will require continuing reinvestment in the energy sector—but DOE was optimistic that innovation will allow for strong production in the future. Among the areas highlighted were advanced shale recovery methods which “will enable a much larger portion of the shale oil resource to become recoverable.” Currently only 5-10 percent of a shale oil resource can be recovered through primary production methods. Development in this area would allow producers to continue to access more of the oil present.

And innovation is likely even in the face of an economic downturn, as the report found:

“The resiliency of the U.S. energy industry has been proven through a multitude of commodity price fluctuations over many decades…Often, it has been during the times of economic stress that paradigm-shifting technologies have been developed and deployed.”