The Department of the Interior (DOI) released a new report last week detailing the economic contributions of DOI activities and programs in 2016. According to the report, the “Energy & Minerals” category, which includes oil and gas development, accounted for the most jobs (638,630), value added ($75.9 billion) and economic output ($132.93 billion) of any category represented.

Oil and gas activities (also includes coal) also supported 581,539 jobs, added a value of $68.26 billion, and had a direct economic contribution of $52.38 billion last year. The total economic impact, including indirect and induced impacts, was $117.7 billion or 46 percent of the total contributions for all DOI activities and programs, according to the report.

Here is a breakdown of the DOI bureaus where the oil and gas industry has direct economic contributions:

But while these numbers are impressive and show the incredible importance of safe resource development on federal lands, they are only a fraction of what they could be. Though DOI public land and offshore oil and gas production accounted for roughly 25 percent of America’s domestic output of oil and natural gas in 2016, crude oil production on federal lands fell nearly two percent in 2016 while natural gas production has steadily declined since 2008 — roughly when the shale revolution began.

These declines have come at the same time in which oil and gas production on private lands have skyrocketed thanks to hydraulic fracturing. A recent American Petroleum Institute (API) report analyzed the difference in production between private and public lands in recent years, finding:

“Between 2010 and 2015, the percentage of the nation’s crude oil produced on federal land decreased from 35.7 percent to 21.0 percent. And according to the Bureau of Land Management, the number of drilling permits issued on federally controlled onshore land dropped by 47 percent from 2008 to 2015. Further, federal data show crude oil production remained flat between 2010 and 2015 on federally controlled land, while natural gas production declined 27 percent.

“In contrast, on private and state lands, where drilling typically does not require federal approval, production increased 115 percent for crude and 66 percent for natural gas from 2008 to 2015.”

If resource development is one of the largest economic contributors for the Department and recent years have brought increased oil and gas production across the United States, then why is the DOI seeing such steady declines? API also explained in part why this contrast exists,

“The stark difference between production on federal land and state and private land is not just due to ineffective and inefficient national energy policy; it’s also bad federal fiscal policy. If production on federal lands had grown at the same rate as overall U.S. production, from 2009 through 2015, total royalties would have been 31 percent higher, with an additional $20 billion in royalties collected by the federal government.” (emphasis added)

According to multiple media reports, the BLM had a backlog of more than 2,800 drilling applications as of Jan. 31. Such inefficiencies are especially problematic for states such as New Mexico. 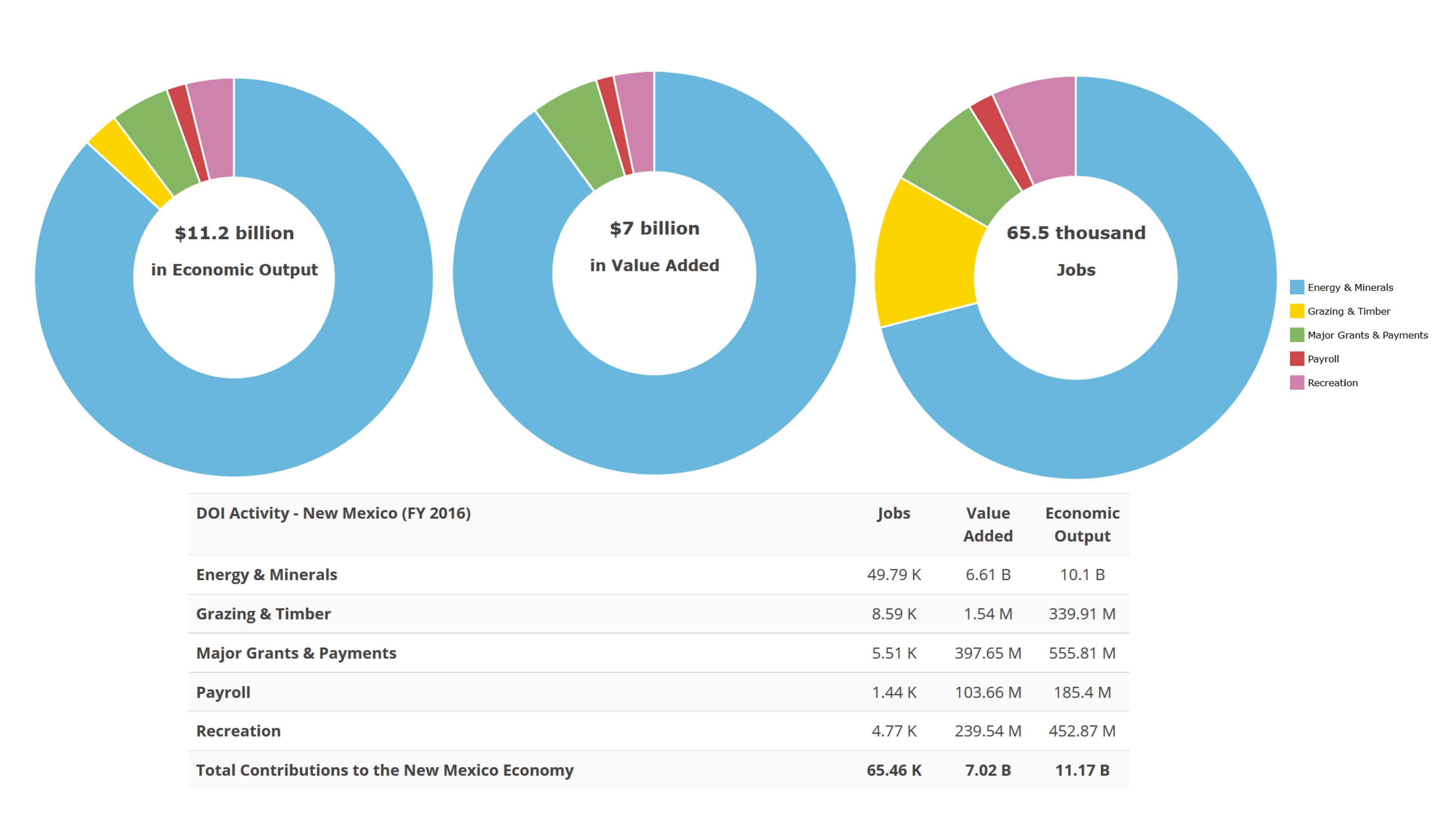 And while those numbers for one of the U.S.’s top states in terms of oil and gas production from federal lands may seem somewhat incredible, New Mexico’s oil and gas development on federal lands is actually pretty stagnant. New Mexico Oil and Gas Association (NMOGA) Executive Director Ryan Flynn attributed this trend to Bureau of Land Management (BLM) inefficiencies via written testimony for a June House Committee on Natural Resources Subcommittee on Energy and Mineral Resources hearing. From Flynn’s testimony,

“While the rest of New Mexico’s economy struggles to gain a foothold, the state’s oil and gas industry remains a bright spot… yet the state has not fully realized its resource development potential due to problems at the BLM.”

These issues – particularly an inefficient permitting process that has resulted in one permit pending for more than 18 years – have resulted in roughly $1.4 million in federal royalty and more than $800,000 in state severance being deferred each day, according to NMOGA. As Flynn further explained,

“The rights of way (“ROW”) process at the FFO is likewise inefficient, with operators waiting up to a year for approvals. By contrast, the state approves ROWs in 45 days or less.”

There is a renewed interest in New Mexico’s oil and gas industry in recent years with BP declaring in August that the Mancos Shale in the San Juan Basin “exceeded expectations” and “could become one of the nation’s top shale plays.” And in the Southeastern part of the state, the Permian “super basin” was recently reassessed and is estimated to soon surpass its production peak set in 1973.

These recent developments could provide an even greater windfall for the state if changes are made to some of these resource development-stifling policies at BLM.

Federal lands a target for “Keep It In the Ground” Activists

Delay tactics being employed by extreme activists as part of the “Keep It In the Ground” movement have also contributed to decreased oil and gas activity on federal lands. This includes staging protests in Colorado, Ohio, Utah, Nevada, and elsewhere in an attempt to block or stop federal mineral lease auctions.

In Ohio for example, the BLM spent four years studying the potential impacts of allowing oil and gas development on 40,000 acres located in the Wayne National Forest (WNF). To date, three lease auctions for parcels within WNF have amounted to just under $7 million with 95 percent of the acreage yet to be leased. Further, that’s just the lease sale amounts and does not include future royalties when wells are actually put into production.

In 2016, the U.S. Chamber of Commerce released a report as part of it’s Global Energy Institute’s (formally Institute for 21st Century Energy) “Energy Accountability Series” that found that stopping energy development on federal lands would result in a loss of “nearly a quarter of the nation’s current production of coal, oil and natural gas,” more than “$11.3 billion per year in annual royalties and rental fees for federal and state governments,” and a loss of “more than 100,000 direct jobs” and another “280,000 indirect and induced jobs.” The press release for the report further explained that western states and the Gulf of Mexico would feel the impacts of such a decision most heavily,

“For instance, Wyoming would lose $900 million in annual royalty collections—which represents 20 percent of the state’s annual expenditures. New Mexico could lose $500 million—8 percent of the state’s total General Fund Revenues. Colorado would see the loss of 50,000 jobs, while the Gulf States (Texas, Louisiana, Mississippi and Alabama) would see 110,000 fewer jobs.”

Oil and gas development continues to be an important part of the Department of Interior’s economic activities. However, current policies and delays are stifling production from achieving more than a fraction of its potential. In fact, these actions have led to decreasing oil and gas activity on federal lands at a time when development on private acreage is leading to record-breaking production.