The California Independent Petroleum Association (CIPA) recently produced a short but powerful video highlighting the contributions that oil and gas workers make to our state. The video also shows how California’s energy industry creates life-changing employment opportunities for men and women of all backgrounds, which in turn benefits their families and communities.

Why is the content of this video timely and important? Because California policymakers, regulators, industry and NGOs are now determining how our state will move forward in a dramatically new national political environment. And one thing is clear: California will continue to position itself as an outlier; a state where most are unapologetic about having the strictest environmental regulations in the United States despite the deregulatory direction of the Federal government.

In addition to their focus on environmental stewardship, of course, Californians are also passionate about innovation, opportunity – especially opportunity for minority and immigrant communities — and economic growth, especially in regions of the state slowest to recover from the most recent recession.

It is critical, then, that policymakers and other stakeholders not let an important group of Californians — the state’s energy workers — get lost in the policymaking noise. These mostly blue-collar men and women — many without a college education — are the backbone of California’s energy economy, supporting the production, transportation and refining of oil and natural gas that is essential for the state to function. In today’s uncertain political environment, these hardworking Americans and proud Californians want to make clear that they’re glad to be contributing to our state.

In CIPA’s video, a few of these workers are given a voice. 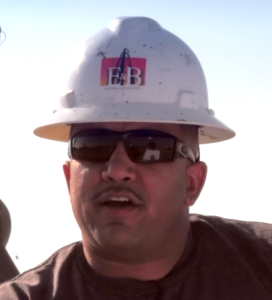 “Everybody feeds off the Bakersfield men that work hard for their families,” said Derrick Newsome, who has been working in the industry for five years. He notes that oil and gas workers bring home living wage salaries that can support middle-class lifestyles, which is necessary for the local economy to support restaurants and other small businesses.

“I wish the lawmakers of California would look at us as men, not as numbers,” he said, showing concern for the ongoing debates over policies that could put his company out of business. “This oil field industry built me up, from the ground up… I never made this much money.”

One of his colleagues, Juan Sanchez, expressed gratitude for the opportunity created by oil and gas companies in the state. He imagined

that his livelihood depends on the industry’s continued success.

“Just to be able to find a job right now, it’s hard. To find one that is going to pay as good as this, that would be way more difficult” he noted. “My oldest son is going to college right now, so it allows me to provide better for him. My wife and I didn’t go to college, so the fact that he’ll be able to graduate, you know, it gives me a lot of pride.”

A third worker, Jerry Flores, exuberantly chatted about the competitive benefits his oil company offers to men and women who work in the field. “We got a 401(k), we got dental, we got good health insurance,” he said. And, he was proud of how oil

and gas workers contribute to their local area, saying “We contribute, we pay our taxes… I love my job, this is all I ever had. And I will go to Sacramento, and I will talk to anybody. I came from nothing.”

The data show that Mr. Flores and his colleagues are right to be enthusiastic.

The average compensation in California for blue-collar oil and gas industry workers is higher than the national average. According to the most recent Bureau of Labor Statistics Data, collected May 2015, virtually all oilfield and refinery jobs pay better in California than they do nationally. Roustabouts – usually entry-level field workers with high school diplomas – start out making over $40,000 annually. As these workers advance into more specialized positions over the course of their careers, their compensation gains are notably higher in comparison with wages paid in other states. For example, gas plant operators in California earn over $80,000 on average, while nationally the average salary for the same position is roughly $65,000. Pipelayers, rotary drill operators and petroleum pump system operators also make around $10,000 more than their counterparts in other states, according to the federal data.  Considering the exceptionally high costs of living in the state of California, it’s great to see that energy companies compensate their employees in the state so that they are not in danger of struggling financially.

We have previously documented that home-grown energy production has led to dramatically positive impacts on the climate globally. This wouldn’t have been possible without the hard work of the hundreds of thousands of energy workers – from chemists, geologists and engineers, to roustabouts, pipelayers and drillers – including mostly high-skilled blue collar workers, many of whom are minorities and immigrants, who make up the backbone of the state’s energy industry. In addition to its environmental benefits, California production is part of the United States’ emerging energy renaissance, which has positive implications not only in California’s Central Valley (which is improving economically but is still bedeviled by higher unemployment than the state average) but nationwide. The industry continues providing an accessible American dream for those who might otherwise not have had it.

As California blazes a new path forward, let’s be sure to remember the important contributions that Derrick, Juan, Jerry and all of their colleagues make to the lives of their families and their communities – but also to their state and their country – each and every day.