David Hughes, a Canadian geoscientist and a fellow of the anti-fracking Post Carbon Institute, has emerged as one of the media’s favorite proponents of “Peak Oil,” the debunked theory that oil production will soon be in permanent decline. Never mind, of course, that there are more proven oil reserves today than there were decades ago, when “Peak Oil” advocates were saying the exact same thing as they are today.

In a new report, Hughes once again gives succor to anti-development and anti-fracking activists with more claims that shale development will “peak” a lot earlier than expected. More specifically, Hughes claims that “tight oil production from major plays will peak before 2020”. He also adds:

“…by 2040, production rates from the Bakken and Eagle Ford will be less than a tenth of that projected by the EIA.”

Hughes is arguing, in effect, that the hundreds of thousands of jobs created, the shrinking deficit of the U.S. trade balance, and the significant reduction of greenhouse gas emissions that are attributable to unconventional oil and gas development will be short-lived.

So, let’s get down to business. Is shale’s future not as bright as it looks? Has Hughes finally proven, after many failed attempts, that all the actual experts are wrong? Will all the leading authorities in the industry be revising their predictions in the light of his conclusions?

You can probably guess the answer (no), but let’s dig a little deeper to see why.

Oil and gas production forecasting models are highly dependent on well productivity inputs, which are themselves largely dependent upon technological innovation and evolution.

In other words, as technology improves, so does well productivity and the increased energy development that goes with it. As Hughes himself put it, “in determining future production rates (for this study), the current trends in well productivity over time were considered.”

As a result of this interdependence, any slight inaccuracy in the inputs of a key variable – in this case, well productivity — gets compounded over time. Even a small error in one’s assumption will result in a major flaw when assessed over a long period. Not surprisingly, this is exactly where Hughes’ analysis gets derailed.

Despite its complexity and extension, the driving force of Hughes’ analysis hinges on one inaccurate assertion:

“…average well productivity has gone flat in all major shale gas plays except the Marcellus”.

To say that this is a mischaracterization would be an understatement. Consider, for example, what the EIA stated just six months ago:

Additionally, the EIA’s Drilling Productivity Report directly and definitively contradicts Hughes’ assertion. With the exception of oil production in the Haynesville shale, which is flat, the productivity in every major U.S. shale play is increasing. Here’s EIA’s latest chart:

In fact, technological advances have caused a dramatic increase in the estimate of recoverable oil and gas across the United States. Last year, for example, the U.S. Geological Survey (USGS) doubled its 2008 assessment for technically recoverable oil in the Bakken and Three Forks formations of North Dakota and Montana. In 1995, the USGS estimated that the Bakken only contained about 150 million barrels of recoverable oil. By July of this year, North Dakota had produced more than 150 million barrels of oil in 2014 alone.

In fact, the recent drop in global oil prices has put drilling efficiency (which is, of course, inversely related to production cost) to the test. Just five days ago, the Manhattan Institute’s Mark Mills explained in a Wall Street Journal op-ed:

As for the road ahead, experts across the United States are already forecasting and discussing what the next disruptive shale technology will be. To quote Robert Kleinberg, a Schlumberger senior fellow:

“Things are changing so fast it’s very difficult to predict the upside [of production] and it’s going to get harder.”

Altogether, the facts show that David Hughes’ assumption has sorely missed the mark.

Perhaps the best way to underscore and illustrate this point is by examining a graph in Hughes’ report that he claims to be supportive of his argument. In reality, it raises several questions. 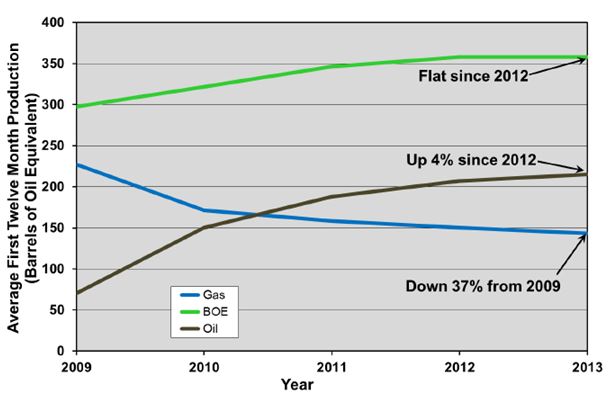 Why are increasing lines (time series) compared on a yearly basis, while decreasing ones are compared on a four-year basis? Was it just to make a 37 percent decrease – which fits his argument — look more impressive than the other two pieces of evidence in the graph that refute him? Why not also emphasize that the graph shows that the average twelve month initial production of oil is up by 180 percent? Or that the combined indicator for oil and gas has increased by around 20 percent?

It is important not to get trapped by ideological assumptions of static technology, especially in an industry like oil and gas, where innovators have proved over and over – in fields from North Dakota to West Texas – that the recoverability of resources increases over time and will for the foreseeable future.

After all, as Mr. Hughes should know, the quality of the outputs of a study – as well as its usefulness and value – is directly determined by the quality of its inputs. Obviously, the Post Carbon Institute has a vested interest in its studies coming to particular conclusions. Working backwards from those claims is the opposite of a scientifically rigorous analysis — and as this short post shows, it also yields some pretty embarrassing errors.