Researchers from Duke University partnered with the University of Calgary, Environmental Defense Fund and Resources for the Future to put together a study on property values in Pennsylvania, which they have actually released multiple times since 2012. The latest version, released at the end of 2015, once again bases its entire findings on one assumption, namely that there is a perception of groundwater contamination in areas with shale development and this perception is negatively impacting property values. From the study,

“Although data are not available to measure the impact of actual groundwater contamination, the perception of these risks is large, causing important negative impacts on groundwater-dependent properties near wells.” (page 23)

Of course, evaluating something on perception is not science, so it’s not surprising that the media hasn’t given it too much attention over the years. But more importantly, when you look at the actual data, it doesn’t square with the researchers claims: they actually show significant increases in property values in some of the most developed counties in Pennsylvania.

Fact #1: The data actually show significant property value increases in some of the most heavily developed counties in Pa.

While the researchers evaluated their numbers on “perception,” EID actually looked at the data and found some of the most heavily developed shale counties, such as Bradford and Washington counties, have actually seen significant increases in property values since 2009, which is when shale development really took off in those counties. 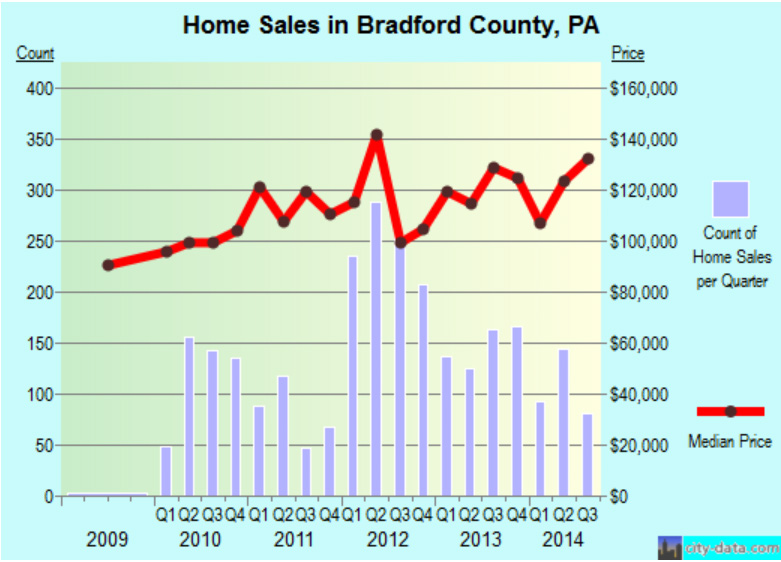 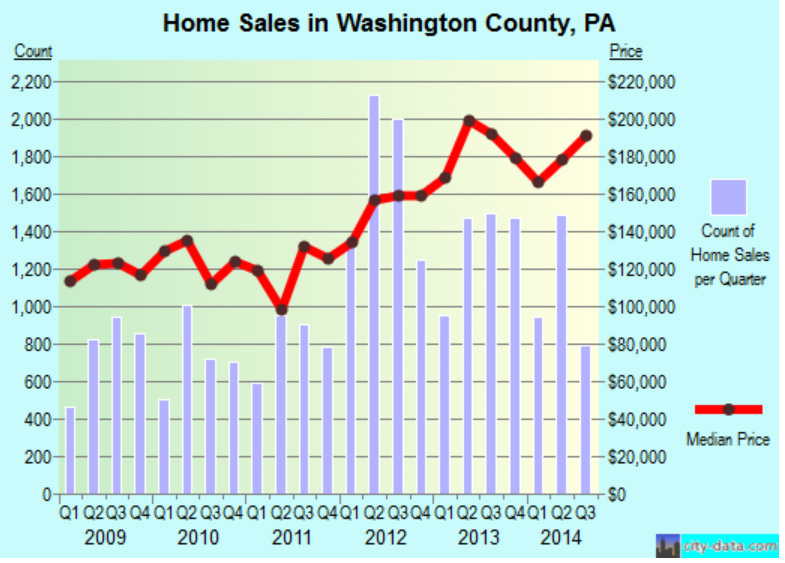 For a little more perspective, in 2000 there were no Marcellus wells in these counties, but by 2013 there were over 1,200 in Bradford County and over 1,600 in Washington County.

In 2011, William Them, a Bradford County realtor, said that property values across the board had increased for both homes and land in his county.

“Then the bubble hit. And what was different about our market is that our prices never dropped. Our housing continued to rise. Our average selling price was $90 – 100,000 before the gas industry hit our area. In 2009, gas leasing was continued but prior to 2009 it was 50 to 100 to $200 an acre. As we moved through 2008-2009 we came up to $5000 an acre to lease an acre of ground. And for large property owners that was a big amount of money. And what happened to our business was that land sales just dropped off the face of the earth. We stopped selling land. And not because we wanted to, because nobody was going to list it.” (0:52 – 1:43)

“In 2010…our housing prices trended up. They didn’t double as you might think because of the tone in the national economy, you still have to have comparable sales to support a sale and a mortgage. But we were finding was a lot of time people were putting cash, extra cash or all cash to buy properties that you wouldn’t have thought would sell for the prices that they sold. So with that happening we’re seeing a market trending up.” (2:42-3:12)

Them’s entire discussion is available in the following video:

In counties like Bradford and Washington, farms are the most likely locations for well sites and they also tend to account for the majority of the county’s acreage.

Back in 2011, EID actually took a closer look at farm sales in Northeastern Pa. and found that properties in shale counties were selling at a high value per acre, because in these rural communities acreage is an important part of the value of a property.

“We learned, based on eight comparable sales over the last year (some 336 acres in land in total), that farmland values in Bradford County, Pennsylvania averaged $6,984 per acre for properties of 10 acres or more. Fourteen sales in Susquehanna County (1,182 acres) averaged $4,993 per acre. Sullivan and Wyoming County properties averaged $5,579 and $7,215 per acre, respectively. Lycoming County saw an average value of $4,547.”

And a report from the National Agricultural and Rural Development Policy Center (NARDPC) in 2014 had similar findings:

“A wave of drilling has occurred in areas with shale formations rich in oil and gas. By increasing the value of subsurface rights or by creating environmental side-effects, leasing and drilling affect self-reported farm real estate values and farm wealth. In parts of Texas and Pennsylvania, farm real estate appreciated when land was leased prior to drilling, with greater appreciation in Pennsylvania where farmers are more likely to own the rights to the subsurface. There, appreciation added $130,000 in wealth for the average farm. When drilling actually occurred, farms in and outside of shale areas appreciated at a similar rate.” (emphasis added)

In other words, shale development has actually added to the value of properties, and the most heavily drilled communities have, in fact, seen significant property values increase since Marcellus development took off.

Fact #2: The study researchers used to determine “perceived risk” has been thoroughly debunked – meanwhile the EPA has said fracking does not pose a credible risk to groundwater.

The researchers base their entire premise in this study on the research from Osborn et al. (2011) that found that “drinking water wells within 1 km of shale gas wells have higher concentrations of methane.”

For anyone not familiar with Osborn et al., it was the very first Duke methane study that came out in 2011. That’s the same study that only looked at 68 water wells, had no baseline tests at all, downplayed that they actually found methane in nearly every well tested regardless of whether natural gas development was happening nearby or not, and actually concluded that fracking had no impact on nearby water wells.

It’s also the same study that was criticized by experts like Tarek Saba and Mark Orzechowski, Civil and Environmental Consultants at Exponent, Inc. that said,

“Note that the highest methane concentration reported by Osborn et al. has a carbon isotope different from the extraction operations gas. This confirms that thermogenic methane unrelated to current gas extraction operations is most likely present in Lockhaven wells and must be considered before concluding a source.” (emphasis added)

And researchers from Brown University determined,

“Their report [Duke] does not fully appreciate the geologic history of this region and misrepresents potential risks of modern drilling and completion techniques used to develop shale gas resources. Knowledge of significant methane as a natural constituent of groundwater in this region long predates the recent development of shale gas resources. In close proximity to natural gas wells, many water samples showed low concentrations of methane. This shows that elevated methane concentrations are not an inevitable effect of drilling. The data presented simply do not support the interpretation put forth that shale-gas development is leading to methane migration from the Marcellus into shallow groundwater.” (emphasis added)

Further, even if the original Duke methane study had not been so thoroughly debunked, more recent studies provided further clarity. For instance, just last year a study was released by Don Siegel at Syracuse University that was literally the most comprehensive study of water quality in the Appalachian region. While the original Duke methane study looked at 68 samples and zero baseline tests, the Siegel study examined over 21,000 samples and compared those baseline tests. Not only did that study find,

“…no broad changes in variability of chemical quality in this large dataset to suggest any unusual salinization caused by possible release of produced waters from oil and gas operations, even after thousands of gas wells have been drilled among tens of thousands of domestic wells within the two areas studied.”

But it also determined that,

This study confirmed that there is a long-history of water issues in Pennsylvania that date back to well before the first Marcellus Shale well in 2004, and that shale development isn’t impacting the state’s water.

And yet despite all of that, these researchers continue to base their entire assumption for their years’ long research on the original Duke methane study.

This latest Duke study is based on a faulty assumption and uses debunked data as a basis that doesn’t hold up to scrutiny. Regions with shale development have actually seen stable or increased property values since natural gas development began in the state. And that’s not a perceived outcome – it’s reality.