Successful oil and natural gas development in shale and tight formations across the country has put the United States on track to remain a net energy exporter through 2050, according to new data from the Energy Information Administration. In its latest Annual Energy Outlook, EIA projects the United States will continue to produce oil and natural gas at prolific, “historic” rates, leading to increased exports that will continue to reshape the global energy landscape.

The EIA data show the rate of development will have U.S. oil and natural gas production – already the global leader – continuing its climb to successive record levels.

From the  outlook’s reference case:

“… the United States continues to produce historically high levels of crude oil and natural gas. In the AEO2020 Reference case, because of continued development of tight oil and shale gas resources in the East and Southwest regions, U.S. crude oil production continues to set annual records through the mid-2020s and natural gas production grows through 2050. (emphasis added)

The data show crude oil production will continue to be driven by the Southwest, dominated by the Permian Basin in west Texas and southeastern New Mexico. Both states are coming off banner years in production, which has led to a windfall of revenue generated by taxes collected on oil and natural gas activity.

Increased development in the Southwest, particularly in the Wolfcamp formation in the Permian Basin, is the main driver of growth in natural gas production from tight oil formations.

Lower natural gas prices will prompt a continued shift to natural gas for power generation in the decades ahead. EIA projects natural gas utilization as a source for electricity will increase, with the rate of growth dependent on supply and costs.

In projections of oil and natural gas production remaining high and costs remaining low, the data show natural gas could account for up to 51 percent of generation:

“As a result of projected lower natural gas prices in the High Oil and Gas Supply case, natural gas-fired generation increases 1.9% per year through the projection period, reaching a 51% share of the generation mix by 2050.”

Analyzing long-term trends, EIA projects U.S. electricity generation will include the increased use of newer combined-cycle natural gas plants as more efficient plants come online and the technology reaches “market maturity.” As result, natural gas will continue to “dominate” in the mix as capacity grows. 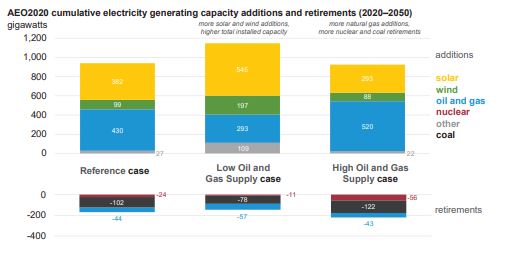 Under every scenario considered by the EIA, U.S. liquified natural gas exports are projected to grow and take a larger share of the global market.

The same IEA forecast– included in its  2019 World Energy Outlook—shows the United States will account for a staggering 85 percent of the world’s oil production growth and 30 percent of natural gas growth through 2030.

LNG trade from the United States has been a boon to allies in the Caribbean, Asia and especially Europe, where a number of countries are working to increase their import capacity to match the rapid expansion in U.S. exporting capacity.

The transition to greater natural gas end-use over the past decade has brought a dramatic decline in air emissions in the United States — more than any other country in the world, a development praised by IEA executive director Faith Birol:

“In the last 10 years, the emissions reduction in the United States has been the largest in the history of energy.”

In the decades ahead, the EIA Outlook demonstrates how natural gas use will continue to reduce carbon dioxide emissions. Without accounting for increases in efficiency or new technologies being utilized, the data show energy-related CO2 emissions will drop 4 percent from current levels, coinciding with increased consumer demand. 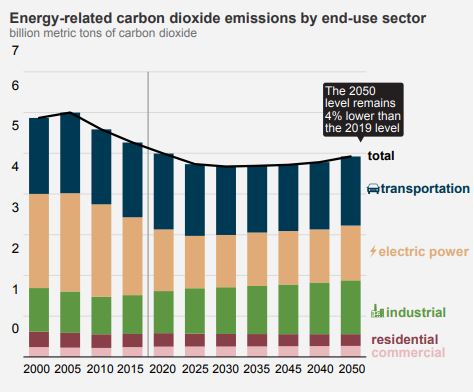 Echoing the finding of the IEA and EIA, the Rhodium Group recently released its annual preliminary emissions estimate, with data showing U.S. greenhouse gas emissions declined 2.1 percent in 2019. Emissions from the power sector declined nearly 10 percent, representing “the biggest year-on-year drop in decades, and a significant change from a 1.2 percent increase in 2018,” according to the report.

The EIA outlook reaffirms the United States is well positioned to remain a global leader in energy for the foreseeable future. Through the American energy renaissance, no country has cut emissions more than the United States. By utilizing the oil and natural gas industry’s best practices, U.S. production will continue to meet growing energy demands at home and abroad while generating significant clean-air benefits.