The U.S. Energy Information Administration (EIA) released its International Energy Outlook 2018 (IEO) this week, reporting that petroleum and natural gas will likely remain the top two global fuels through 2040. EIA is forecasting “rapid” natural gas consumption growth over the next two decades as well as strong petroleum consumption growth, as the following graphic from the report shows. 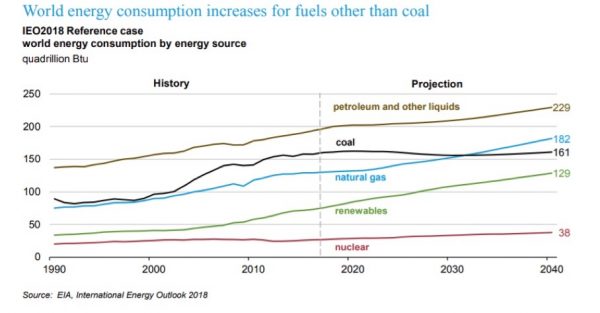 Echoing the findings of last year’s IEO report, EIA data show that fossil fuels will account for 77 percent of the global energy consumption mix in 2040, a figure that is similar to current consumption.

As explained by EIA Administrator Dr. Linda Capuano, despite the “rapid” growth in renewables, the world will continue to make use of all fuel methods unless there are major changes in energy consumptions that alter fuel demand needs. Ultimately, if consumption continues to rise as expected, the rapid growth of renewables and natural gas will not be enough to completely substitute all other forms of fuel.

According to the report, non-members of the Organization for Economic Co-operation and Development (OECD) will be a major source of demand for all fuels, as non-OECD members are expected to account for 64 percent of worldwide energy consumption by 2040. 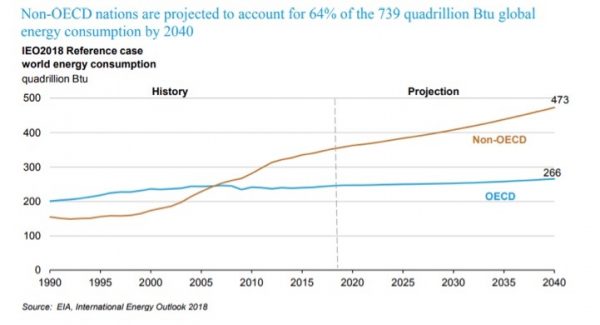 Non-OECD members China, India, and Africa, three of the most populated regions of the world, account for most of the anticipated growth. To find out what’s driving the increased consumption, the EIA report examined the different economic development patterns for the three regions.

To analyze the potential energy consumption of China and India, the report runs several different projections based on each region. For China, one EIA projection assumes China will transition from investment and export-led growth to a more consumption-led growth pattern, and another assumes the transition does not occur. The economy is assumed to grow at an average rate of 5.7 percent per year from 2015 to 2040 in both scenarios but growth in the industrial sector is expected to lead to an increase in energy consumption.

For India, EIA estimates that the per-capita income and energy consumption will continue to trail behind other major economies. The projections show small differences in energy consumption in all three projections – consumption-led, investment-led and export-led. The economy, however, is assumed to grow at an average rate of about 7.1 percent per year from 2015 to 2040 across all cases.

For Africa, the report examines the effect that an average annual economic growth of 5 percent per year from 2015 to 2040 will have on that region’s energy consumption, by sector. As seen in the graphic below, incremental growth is predicted to cause greater energy consumption in the manufacturing and construction sectors. 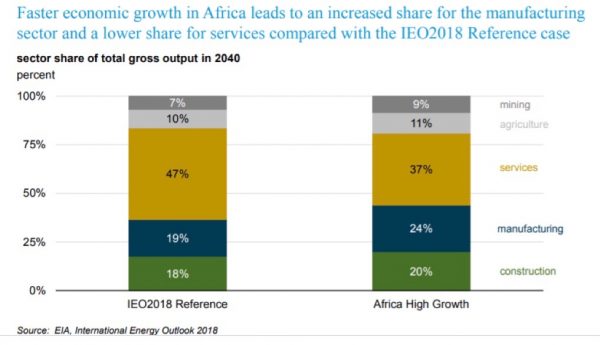 Understanding the development of these regions is key to unpacking the implications for global energy markets. An increase in energy consumption also means an increase of global demand for production, and with natural gas displacing coal as Asian countries in particular move to reduce air pollution, demand for natural gas will only continue to grow. Fortunately, the United States is up to that challenge.

According to a report from EIA released earlier this year, the U.S. is on pace to achieve energy production dominance and become a net energy exporter by 2022. EIA is projecting record U.S. natural gas production this year, and just last week, U.S. crude oil output hit 11 million barrels per day for the first time ever, second in production only to Russia. Withstanding all the projections by EIA is the fact that fossil fuels will remain an integral part of the world’s energy future – with natural gas leading the pack. Constant innovation and modernization around the world will continue to heighten the consumption of energy, especially as rural areas around the world gain access to more energy-intensive goods and the energy industry must be prepared to sustain them. Luckily, U.S. producers are breaking production records every day and will be more than prepared to keep up with rising energy consumption around the world.