EIA: Oil & Natural Gas Will Be In High Demand For Decades To Come

There is an important and continued role for oil and natural gas parallel to the world implementing policies to increase renewable energy consumption, according to the Energy Information Administration’s 2021 International Energy Outlook.

In fact, in its latest IEO, the EIA projects oil and natural gas will represent close to 50 percent of primary global energy consumption in 2050 – despite significant growth in renewables – with liquid fuels remaining the largest source. 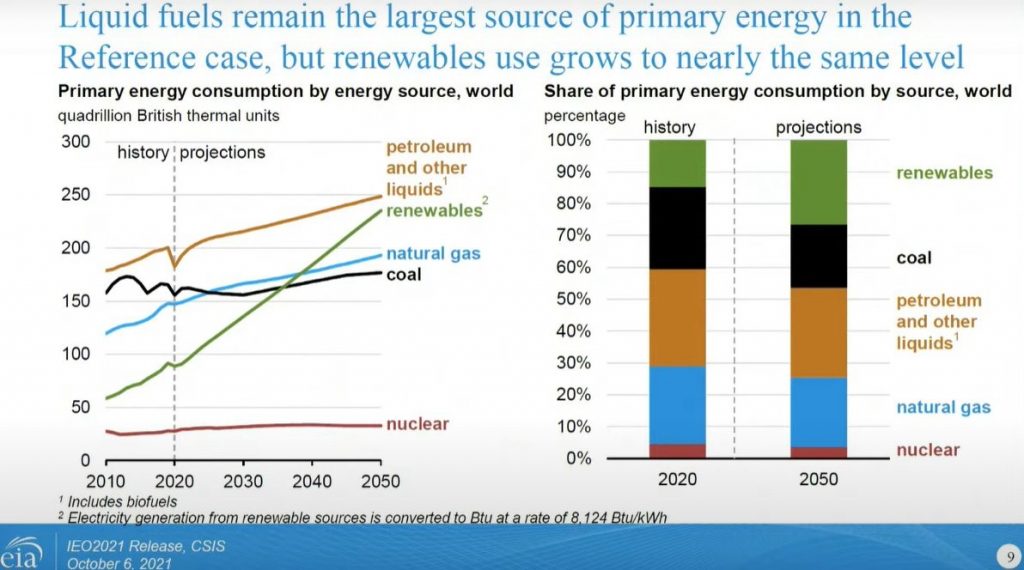 Notably, in contrast to the International Energy Agency’s Roadmap to Net Zero released earlier this year which claimed exploration of new oil and gas fields is no longer needed and seemingly at odds with proposed domestic policies that have fueled uncertainty around U.S. production, EIA calls for an increase in oil and natural gas exploration and production in the latest IEO:

“In the EIA’s International Energy Outlook 2021 we see that responsibly produced natural gas and oil will be part of the world’s energy mix for decades to come. America’s natural gas and oil producers are committed to improving the industry’s environmental performance – and there is proof that it is working. Today, the United States leads the world in emission reductions, resulting in the nation’s cleanest air in two decades. These milestones will continue.  As global energy consumption grows, the U.S. natural gas and oil industry, governed by commonsense, effective regulations and public-private partnerships, can ensure that America and nations worldwide will have a reliable energy supply to power their homes, businesses, and critical services.”

Here are a few important takeaways from the 2021 IEO:

The world is going to increase its consumption of renewable energy, by a lot, in all scenarios EIA modeled, including in the United States. But that does not spell an end for traditional fuel sources like natural gas – not by a long shot. 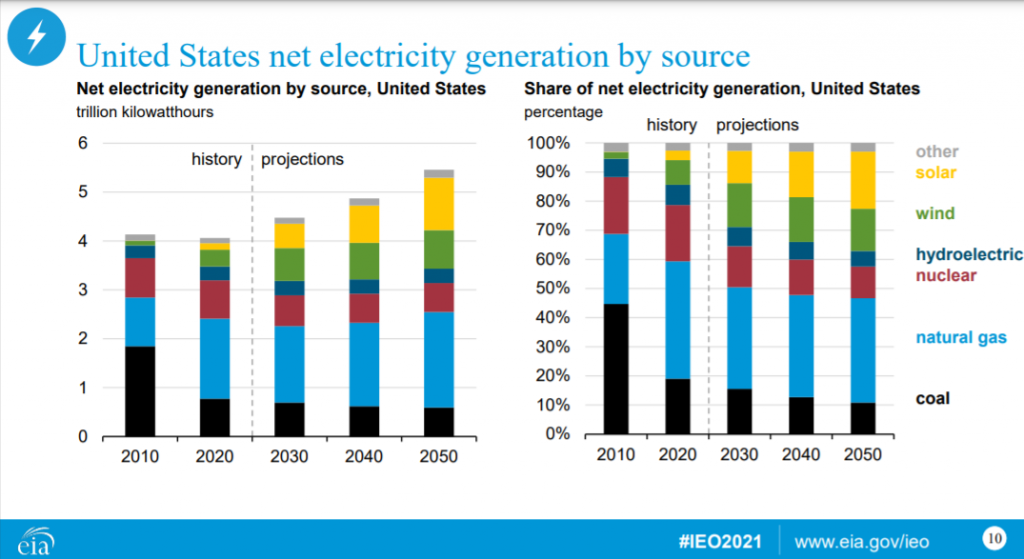 In fact, according to EIA, natural gas and battery storage “will remain critical parts of the electric grid, backing up solar and wind resources,” and that they “will allow the electric grid to meet demand” as renewable generation grows. From the IEO:

“Although new generation will largely be powered by renewables, dispatchable generation sources—such as natural gas- and coal-fired generating technologies as well as batteries—will remain important, especially for grid reliability.”

Natural gas is especially beneficial because it is “more efficient” than traditional fuel sources, and as EIA further explains:

Global oil and natural gas demand both continue to grow.

Global energy consumption is poised to increase by 50 percent compared to 2020 usage, with much of this uptick being driven by increases in population and economic growth, particularly in developing countries in Asia. As EIA explains:

Led by India, these countries are expected to see increased GDP and experience greater access to energy, including more reliable electricity. 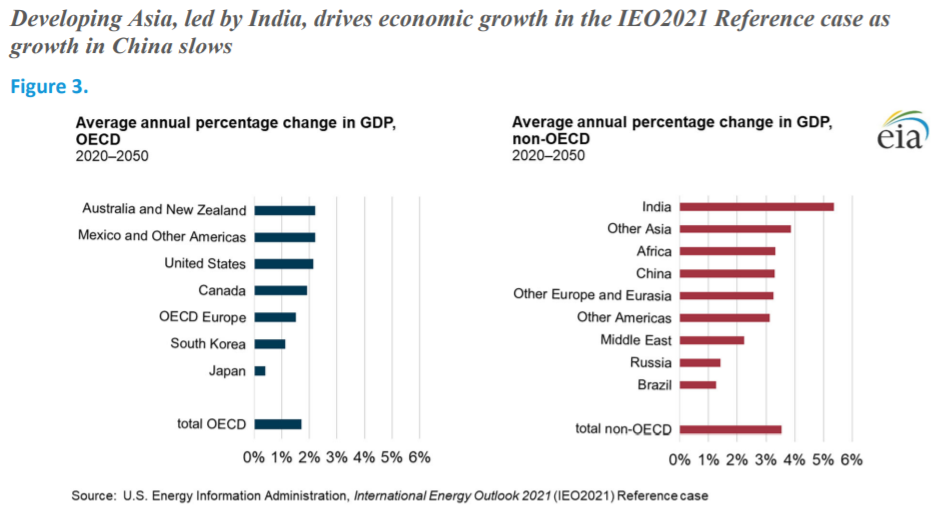 Even as more electric vehicles hit the road through 2050, oil consumption is projected to increase. This is in part because liquid fuels provide a critical feedstock for a variety of products that the industrial sector will continue to need. It’s also an important transportation fuel that is not easily replaced for air travel and other commercial uses. As EIA explains:

“In the Reference case, liquid fuels consumption grows the most in non‐OECD Asia regions, where consumption nearly doubles from 2020 levels. The transportation and industrial sectors account for most of the projected growth.”

Similarly, natural gas energy consumption is also projected to increase as a result of greater use of the resource for electricity generation, and as a back-up generation source for renewables:

“Lower relative prices of natural gas in the near term as well as the need to provide back‐up supply to intermittent renewables are important drivers in natural gas consumption.”

Increased supplies of U.S. natural gas will be needed to meet demand. 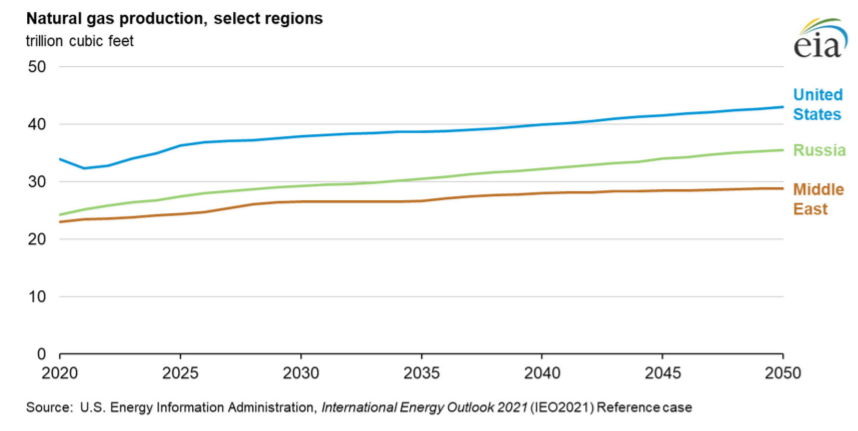 Because of the growth of production in these countries, they are likewise projected to be crucial suppliers of natural gas and LNG throughout the next 30 years, particularly to European and Asian markets.

EIA also projects that over the next ten years, the United States will continue to build out its LNG terminals and other infrastructure, enabling overseas transport and the realization of rapid export growth. In fact, the United States is expected to add nearly 40 percent of the future LNG liquefaction capacity in the near future.

“LNG terminals and transportation vessels facilitate the overseas transport of natural gas between regions that are not connected by pipeline, creating an outlet for natural gas produced in the United States and the Middle East to reach overseas markets where it is in the highest demand.”

As EID has said before, fossil fuels are necessary to build a greener future

EIA’s outlook provides both a realistic and integral look at the future of global energy consumption – a future that continues to be increasingly dependent on oil and natural gas.

Ultimately, fossil fuels play a critical role in meeting the world’s growing energy demand, providing affordable and accessible energy to many. The oil and gas industry is also investing heavily in emission reduction technologies such as carbon capture and storage and emission monitoring technology to reduce its environmental footprint.