The EIA emphasizes that this dramatic increase is due to advances in horizontal drilling and completion techniques used in low-permeability tight reservoirs, including shale plays.  In fact, in 2015 production from tight formations accounted for “more than 4 million barrels per day (b/d), or 50% of total U.S. oil production.” 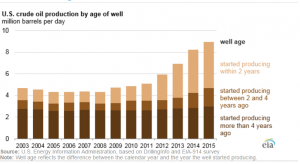 This dramatic increase in production has led to substantial energy security benefits for the United States. For example, BP explained in its latest Energy Outlook that U.S. domestic production is significantly decreasing North America’s reliance on imports:

“The shifting pattern of demand and supply cause regional oil imbalances to shirt and become more concentrated… in particular, the increase in tight oil production, coupled with declining demand, further reduces North America’s reliance on oil imports, with the region set to become self-sufficient in oil over the next few years.” (p. 27)

Similarly the EIA itself predicted that, due to hydraulic fracturing and horizontal drilling, the U.S. may now be on track to become a net energy exporter by 2020.

Producing more oil and gas domestically is not only an excellent way to decrease imports and bring jobs to the country, but also, as noted by President Obama, a net benefit to the environment because the U.S. has some of the most stringent environmental standards:

The EIA’s latest analysis highlights how important the last few years have been for U.S. energy security.  By increasing domestic supply via new well-completion techniques such as hydraulic fracturing the U.S. is strengthening its economy while simultaneously decreasing its imports of crude oil and therefore its dependence on other producing countries.