For the first time, the U.S. Energy Information Administration (EIA) recognized the Anadarko Basin in its latest monthly drilling productivity report, released last week. Located in Oklahoma and the Texas Panhandle, and encompassing the highly productive SCOOP and STACK plays, the EIA report showed what many in the industry already know: the Anadarko is a heavyweight among U.S. shale regions in terms of oil and natural gas production.

While already a well-established oil and natural gas producing basin, the implementation of improved drilling and development techniques has brought the Anadarko new life – and increased attention from producers nationwide. In fact, the region’s current active rig count of 129 is behind only the Permian, with the Anadarko sitting among the top most productive oil and gas regions based on EIA data.

Moreover, this surge in activity and production has coincided with a steep uptick in drilling efficiency. According oil and gas consulting firm EnerCom’s Effective Rig Count – a measure of drilling efficiency which compares current production per active rig with the production per rig in 2014 – the Anadarko has an effective rig count of 404, about 2.5 times the reported rig count of 129. In other words, current rigs operating in the Anadarko are 2.5 times more effective than rigs operating in the basin in January 2014. 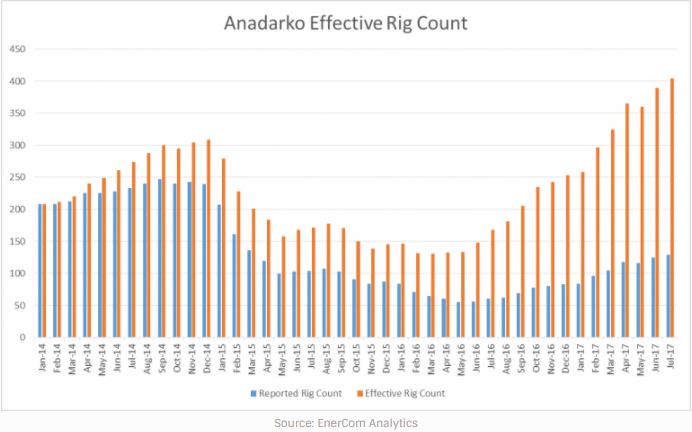 A majority of the activity within the Anadarko Basin is centered on the SCOOP (South Central Oklahoma Oil Province) and STACK (Sooner Trend Anadarko Canadian and Kingfisher) plays of Oklahoma, collectively estimated to be valued at over $40 billion. The STACK specifically is a main focus for producers in the areas, as oil and gas research firm IHS Markit points out, the STACK is in its “early development” with significant potential based on the productivity seen so far. This potential is attracting a substantial investment to the play, as Imre Kugler, associate director of energy research at IHS, states:

“Questions still remain regarding potential across various horizons; however, for operators with acreage and capital to test the play, economic upside exists, so the biggest six operators are on track to invest more than $2.5 billion during 2017.”

Further illustrating the efficiency of production in the Anadarko, IHS notes that the estimated break-even point – the price per barrel at which development makes economic sense – for the top producing wells in the STACK is competitive with top Permian plays. These wells are estimated to break even “under $30 a barrel,” according to HIS – an astonishingly low, which is indicative of the rich resources found in the play.

While the inclusion of the Anadarko Basin in EIA’s monthly drilling report is not hugely impactful in and of itself, what this move denotes is significant. Its inclusion not only signifies recognition of the Anadarko as a top shale basin nationally, but also the immense economic opportunity that continued development in this region represents.