This week, the Energy Information Administration (EIA) highlighted how the oil and natural gas industry’s continued investments in efficiency and precision are having a tangible impact on American energy output.

As Secretary of the Interior Sally Jewell stated in October 2013, “by using directional drilling and fracking, we have an opportunity to have a softer footprint on the land.”  Thanks to the continued investment in these technologies, the oil and gas industry is producing more and more energy with fewer rigs on the ground. That translates to more energy to fuel American manufacturing and jobs — all with a significantly smaller impact on the environment. 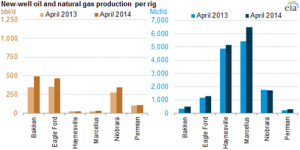 Increased efficiency measures vary from refining drilling techniques and pressures to changing components of the well completion process.  While geology, and thereby the performance and requirements of each well, vary by region, the overall impact has been positive in shale plays across the country. According to EIA’s report:

“The productivity of oil and natural gas wells is steadily increasing in many basins across the United States because of the increasing precision and efficiency of horizontal drilling and hydraulic fracturing in oil and natural gas extraction. Many resource-producing basins are experiencing an increasing yield over time in either oil (Bakken, Eagle Ford, Niobrara) or natural gas (Marcellus, Haynesville).

As EIA data indicate, a Marcellus shale well completed in April of 2014 will yield over six million cubic feet of natural gas/day more than what that same well would have in January 2007. As for oil, each drilling rig in the Eagle Ford shale region of south Texas is forecasted to contribute over 400 barrels of oil per day (bbl/d) more this April than the same rig would have in January 2007. That’s good news for our environment, consumers, and the manufacturing sector alike, not to mention America’s energy security.

Oil and natural gas producers continue to invest in new technologies to reduce their impact on the environment. This includes increasing investments in water recycling technology, reducing on-site methane emissions, and producing more energy from each well site. Meanwhile, the many benefits of increased domestic oil and natural gas production continue to grow across the nation in the form of jobs, lower energy bills, cleaner air, and increased security from fluctuating global markets.

Critics of shale development have frequently alleged that the industry is a “bubble” about to burst, owing to an alleged need to drill more and more wells to maintain production. But EIA’s latest report tosses cold water on that theory, demonstrating that technology is not static — unlike the bizarre musings of anti-fracking activists.