The United States was the world’s top producer of both petroleum and natural gas for the fifth straight year in 2016, according to data released today by the U.S. Energy Information Administration (EIA). Thanks largely to advances in horizontal drilling and hydraulic fracturing technology, the U.S. initially surpassed Russia and Saudi Arabia as the world’s top overall producer of oil and gas in 2012. We haven’t looked back since, as the ongoing shale revolution has firmly established America as the world’s leader in hydrocarbon production just a few years after it was widely assumed the U.S. production was in irreversible decline. 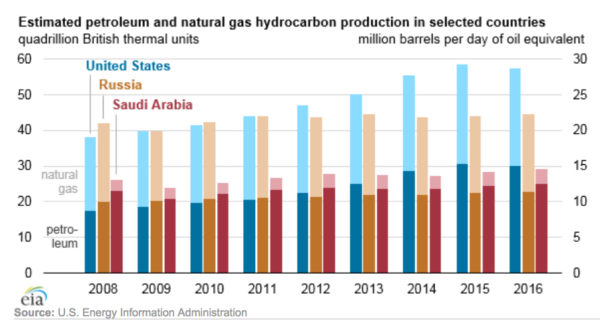 Oil production actually fell slightly in 2016 compared to the prior year’s output level, diminishing by 300,000 barrels per day (bpd) due to consistently low commodity prices that provided incentive for American producers to scale back new drilling in high-cost basins. Additionally, an unusually warm winter in the continental U.S. resulted in less demand for natural gas as a domestic heating fuel. For most of 2016, U.S. natural gas prices in were at their lowest level since 1999, contributing to an output reduction of 2.3 billion cubic feet per day (bcfd).

But despite these market pressures, America’s overall output of oil and gas still far outpaced the world’s next biggest producers — a testament to the resiliency of an industry that has become smarter and more efficient.

And fortunately, all signs point toward the U.S. maintaining its title as the world’s top oil and gas producer for the foreseeable future. The EIA noted in its June 6 Short Term Energy Outlook that oil production should reach 9.3 million bpd in 2017, up from 8.9 million bpd last year, in addition to shattering the all-time production by reaching 10 mbpd by 2018. Rystad Energy has even projected production reaching that level by the end of this year, breaking the record set in 1970.

These improving figures are in large part due to a modest price recovery and current record-high exports of oil and natural gas from the United States. The shale gas boom has unleashed a wave of liquefied natural gas (LNG) exports over the past year, and the U.S. has now exported LNG to 20 countries. That number will only go up as more export terminals become operational in the next few years. And with Russia and Saudi Arabia set to abide by oil production limits until March 2018 as part of the recent OPEC agreement, it’s shaping up to be another record breaking year for the U.S. in 2017.