The U.S. Energy Information Administration (EIA) released its 2018 Annual Energy Outlook (AEO) on Tuesday, broadly forecasting continued natural gas growth through the next several decades. The AEO is one of the most eagerly anticipated annual forecasts for the energy sector each year, and this time around the EIA once again made clear that natural gas has the brightest future among all energy sources in America. 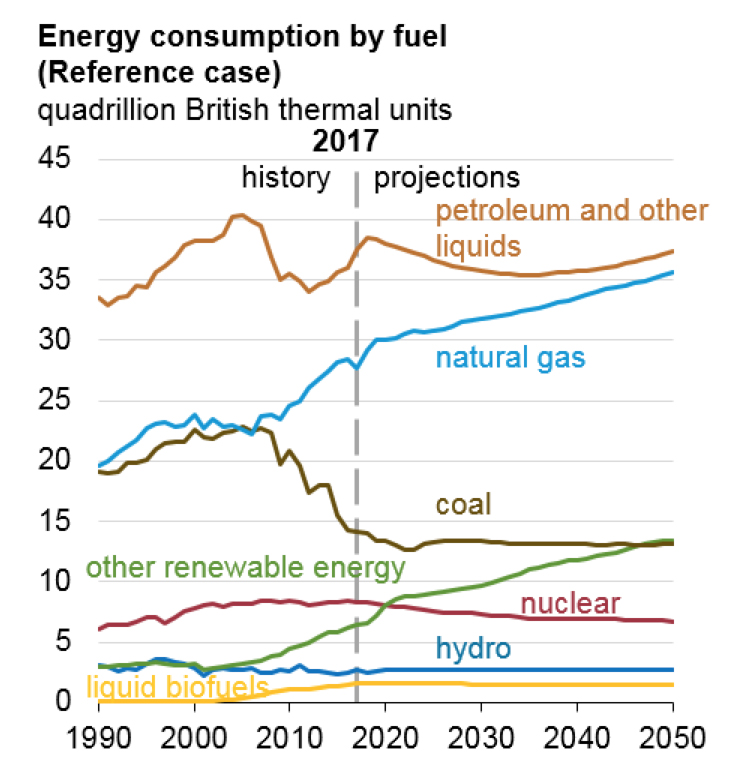 A big reason for this expected increased use of natural gas can be traced to the fact that the EIA reference case forecasts that all electricity generation capacity added after 2022 will come from either natural gas or renewables.

Use of petroleum and other liquids is expected to stay relatively steady, hovering between 35 and 38 quadrillion BTUs per year through 2050.

The use of coal, hydropower and biofuels is expected to remain fairly stable through 2050, and nuclear power is likely to see a slight decline over the same time span.

The increasing use of natural gas is a good signal for the long-term health of the economy. The EIA forecasts that the majority of new natural gas use will come from industrial users and exporters of liquefied natural gas:

Growth among industrial users – especially in the chemicals industry – is a strong sign that American manufacturing and related industries will be able to keep growing thanks to abundant, cheap natural gas made possible by fracking. 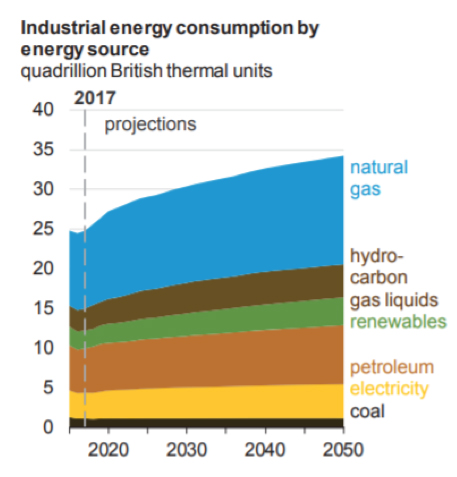 Additional demand from exporters of LNG signals that American production will be so strong that exports will continue to be feasible even as demand from U.S. industries continue to rise. In short, the EIA predicts that natural gas has the potential to keep supporting new domestic economic activity and exports – both of which signal healthy trends for job creation and energy security.

In total, natural gas currently holds the largest share of U.S. energy production – and its market share is set to grow substantially through 2050, from about 28 quadrillion BTUs today to 45 quadrillion BTUs in 2050. 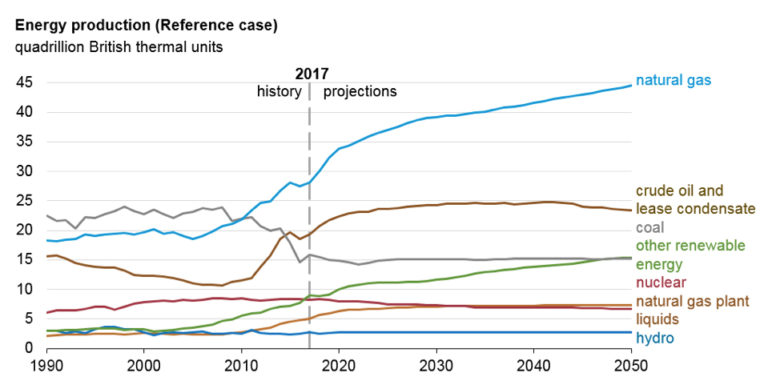 Thanks in large part to this expected growth of natural gas production, the EIA expects the U.S. will become a net energy exporter by the mid-2020s in all but two of its forecast scenarios. 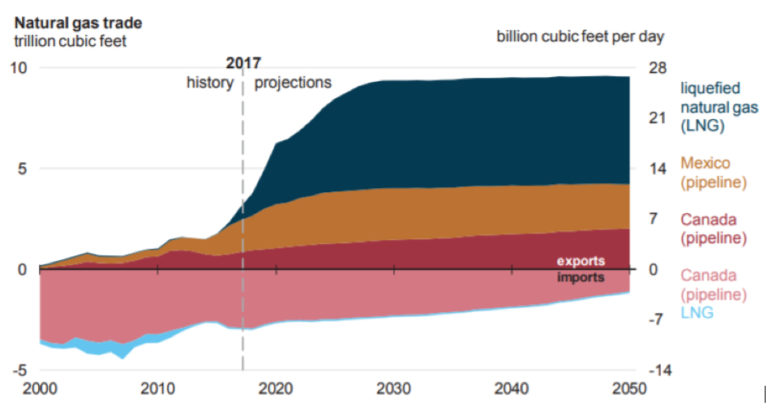 The bulk of new energy exports will result from sharply increasing LNG export capacity in the next decade.

Aside from extending its forecasts out to 2050, there were several other big changes to the 2018 AEO. The EIA removed key assumptions from its forecasting models about the implementation of the Clean Power Plan (CPP), since the Trump administration does not anticipate implementing the regulation. However, the EIA notes that because the U.S. Environmental Protection Agency has not finalized its rulemaking on how the CPP will proceed, subsequent AEO’s will take into account future actions regarding the CPP.

The EIA also introduced a new Natural Gas Markets Module (NGMM) into its forecasting. The NGMM “balances supply and demand on a monthly basis across states rather than on a seasonal basis across regions,” according to the EIA. Therefore, forecasts about natural gas prices across the country reflect more precise data about existing price conditions and natural gas trade with Mexico and Canada.

Overall, the 2018 AEO is yet another signal that the U.S. natural gas industry is going to be an integral part of the economy for the long haul. The EIA is doing its best to keep pace with rapid changes in the energy industry – from policy to production – and despite the turbulence of recent years, American natural gas is proving to be a resilient and reliable fuel that will be powering the USA for decades to come.