Since Utica Shale development took off in 2011, companies have been investing a tremendous amount of capital in eastern Ohio. Billions of dollars have been spent developing well sites, creating much-needed infrastructure, standing up regional headquarters for service companies, and constructing hotel and restaurant chains. In addition, landowners and municipal governments have benefited from lease payments.

These investments across the board have resulted in an uptick in sales activity, and therefore have created a surge in sales tax revenues. According to data obtained from Ohio Department of Taxation’s sales tax distribution website, EID research shows that over the past five years shale counties have realized a 65 percent boost, thanks in large part to the investments made by the oil and gas industry. 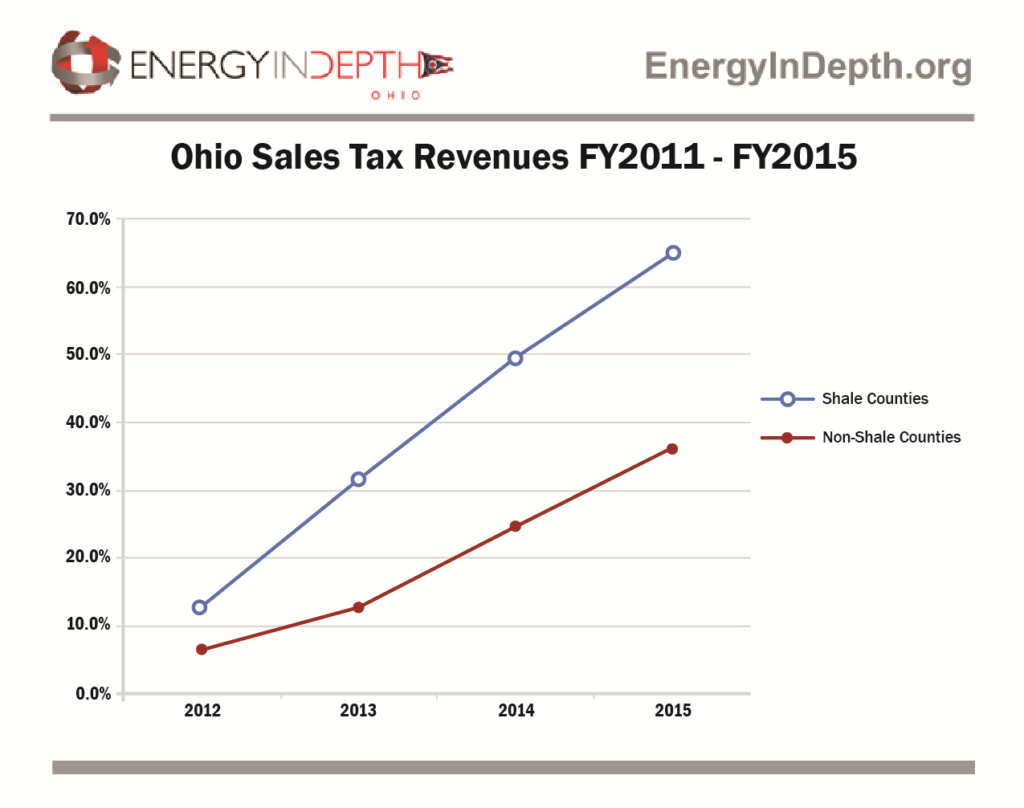 EID analyzed the Ohio sales tax distributions in shale counties over the time horizon of FY2011-FY2015, as this is the most up-to-date data available.

We analyzed each year-over-year percentage change during that time period for the selected shale counties as compared to the rest of the counties’ allocations to determine if there was a relationship between oil and natural gas activities and growth rates in sales tax revenues in the identified shale counties.

We identified shale counties, as the shale counties which have experienced the most oil and natural gas activity as it relates to production of wells and related services. For this research, we included Belmont, Carroll, Columbiana, Guernsey, Harrison, Jefferson, Monroe, and Noble counties. It is important to note that several other counties have also experienced oil and gas activities, such as Mahoning, Trumbull, and Washington counties. However, these eight counties have been the core of the development in Ohio.

Our research shows a direct correlation between activity from oil and gas investment and sales tax revenues. Shale counties realized a 65 percent boost over five years, as compared with the overall state counties which realized a 37 percent increase over the same period of time. In fact, even last year, when pundits were quick to call the Utica shale exploration a so-called “bust”, shale counties still outperformed the statewide year-over-year percentage change, demonstrating that oil and natural gas investment has had a lasting positive impact on the communities where it occurred.

As EID previously reported, the sales tax allocation that the state pays to each county is only a small fraction of the overall sales tax actually paid by consumers. In fact, the state of Ohio keeps the majority of sales tax revenues for their general fund. Here’s how that works: a business in Carroll County pays 6.75 percent in sales tax revenue so a $100.00 sale requires $6.75 in sales tax. The business sends that $6.75 to the state of Ohio and the state takes $5.75 and returns $1.00 to the county where the business is operating. The reason this is important to note is that a 65 percent boost in sales tax to Belmont, Carroll, Columbiana, Guernsey, Harrison, Jefferson, Monroe, and Noble counties, is in fact a boost to the entire state, because the state of Ohio keeps the vast majority of the tax collected; only a small fraction is returned to the counties.

In short, thanks to shale, Ohio’s statewide coffers have grown by millions. 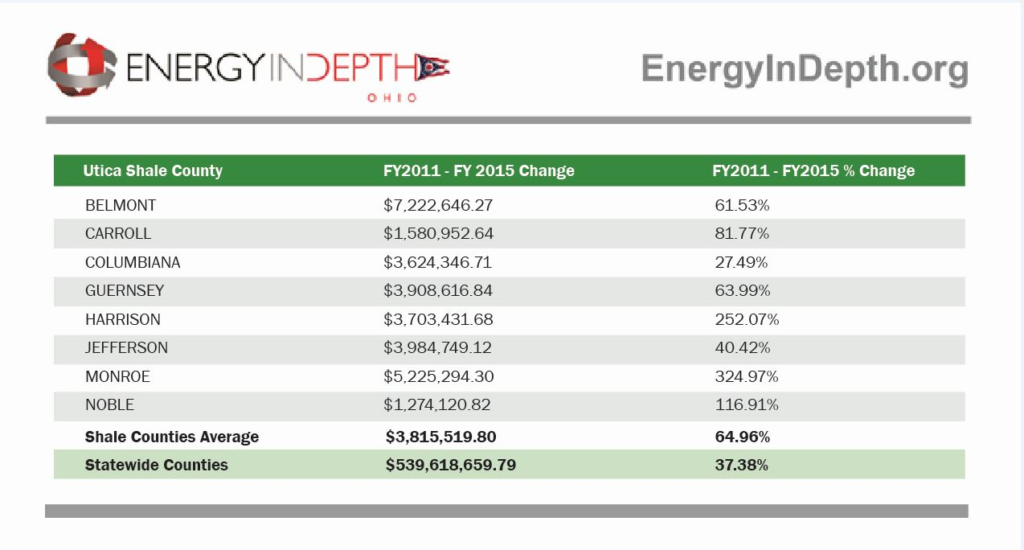 Looking closer at the data, it was evident how oil and gas activity is directly correlated with higher revenues, giving a hand-up to some of the hardest hit counties in Ohio. Take a look at Monroe County, for example, where sales tax revenues jumped over 320 percent over the past five years. That’s because Monroe County has some of the best production Utica shale wells in the state. Harrison County, where MarkWest has stood up a corporate office and invested over $2.5 billion to date in Ohio, and is employing local residents in the community, also saw a 252 percent boost.

It’s not just drilling activities driving the economy; it’s the ripple impact from the industry that has inspired confidence into these areas. Communities like St. Clairsville, Ohio, where hotels, Starbucks, retail centers, and more have come right along with the staggering well production from Utica shale wells.

So, to echo a new report released from the US Chamber of Commerce entitled “What if America’s Energy Renaissance Never Actually Happened?”— if the American energy renaissance never actually happened over the past five years, these nine counties in eastern Ohio would have not realized the millions in tax receipts they have experienced and the state would have missed out on millions more.

As Rep. Johnson, a member of the House Energy and Commerce Committee, recently stated,

“The bottom line is this: The energy renaissance that has happened in the Marcellus and the Utica shale—that is what has brought Ohio back, in my opinion. “

EID’s new report underscores (yet again) that the Keep It in the Ground activists are completely out of touch with the people who live and work in Ohio. We challenge these groups to debate our findings and try to contest the obvious positive correlation between investment from shale and sales tax revenues that benefits both the entire state, as well as the counties directly.