Institute for Energy Research and American Energy Alliance president Thomas Pyle recently toured Pennsylvania’s northeast Marcellus Shale, making stops in Williamsport, Tunkhannock and Harrisburg to discuss the game-changer that shale has been for the Commonwealth.

Pyle explained at each stop that America is in the midst of a “bonified energy renaissance,” and that the United States now has “a demand opportunity,” rather than supply problem, thanks to shale. As Pyle wrote in a Patriot-News op-ed on Tuesday,

“Pennsylvania is at the forefront of this energy revolution. …Not only is gas from the Marcellus Shale powering the state and our entire region, it’s also being used to power cities halfway around the world.” 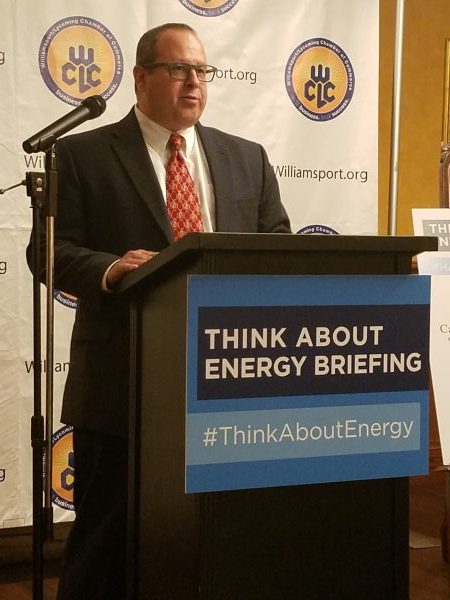 Thomas Pyle speaking at the Williamsport-Lycoming Chamber of Commerce’s Think About Energy Event.

Thanks to shale, Pennsylvania has become the second largest U.S. producer of natural gas – going from producing less than 200 billion cubic feet of natural gas annually to more than 5 trillion cubic feet annually in roughly a decade. As Pyle explained, “That’s enough natural gas to provide for U.S. residential gas consumption for an entire year with room to spare,” in addition to providing economic benefits across the Commonwealth. But as Pyle noted, not every state has followed the same path to “energy preeminence” that Pennsylvania has taken.

In contrast, Pyle described the current state of energy and economics in New York, “where fracking is banned and the governor refuses to allow pipelines to be built,” and New England as “a cautionary tale,” saying,

“Unfortunately, Pennsylvania’s northern neighbor New York has shunned the economic prosperity attached to its natural gifts in favor of virtue-signaling about the environment – to the detriment of not only its citizens, but the entire Northeast.”

“Not only have New York politicians put a ban on fracking, they have obstructed pipeline construction at every turn, leaving their constituents in dire straits. New York, in choosing to embrace the so-called “Keep It In the Ground” movement and reject the objective safety of fracking, has needlessly placed its own energy market in a precarious situation.”

The result is that,

“New York families are saddled with less reliable, less affordable energy and have missed out on the incredible employment opportunities that the oil and natural gas industry has provided to families living in the Marcellus region just on the other side of the state line.”

These decisions have had an even bigger negative impact in New England, where as Pyle described, New England’s Independent System Operator predicts supply will not be able to keep up with demand in the near future, resulting in rolling blackouts. Further, Pyle explained,

“Pipeline constraints have caused Northeastern states to experience at times the most expensive natural gas prices in the world, with some winter rates in New England increasing to 60 to 70 times the normal rate.

“The lack of infrastructure has even led to the importation of Russian natural gas into New England, New York and New Jersey. This bears repeating:  Due to artificial political barriers blockading domestic transportation of natural gas, New England is still dependent on shipments of liquified natural gas, including from Russia, for almost 10 percent of its needs.” (emphasis added)

It can’t be said enough that shale has been a game-changer for Pennsylvania and all of the Appalachian Basin, thanks to policies that have provided environmental protection while still allowing economic opportunities to flourish. As Pennsylvania Manufacturers Association president said in Tunkhannock,

“I don’t need to tell you about the transformative quality of what you have here.”

And New York could have a similar story to share if it weren’t for the “Keep It In the Ground” agenda taking priority over science and experiences that have led to very real consequences for neighboring New England.

To use a baseball analogy that is quite apropos, considering Pyle also had the opportunity last week to throw out one of the opening pitches during Marcellus Energy Night at a Scranton Railriders game: We’re only in the first inning of this shale revolution, and there may still be time for states like New York to get into the game.