The methane emissions incident at the Aliso Canyon natural gas storage facility – not, it should be noted, at a producing oil or natural gas well — has generated concern and it is crucial that the emissions are contained as quickly as possible.

However, some environmental groups have used this one event as an opportunity for exaggeration and misinformation. The latest to attempt to conflate this single situation with broader methane policy can be found in a recent column in the Wall Street Journal by Fred Krupp, president of the Environmental Defense Fund (EDF).

Mr. Krupp argues, unsurprisingly, for additional sweeping regulations on industry, even as studies conducted by EDF itself have shown that methane emissions across the entire natural gas system are easily low enough for natural gas to have a significant climate advantage.

Throughout the column, Krupp alternates between references to the underground storage issue at Aliso Canyon and exploration and production (E&P) as if they were the same thing; they are not.  In fact, the high pressure used to store natural gas at Aliso Canyon is about seven times greater than the pressure in oil and gas production wells. The lower pressure of producing wells, and the need for artificial lifts in most of these wells, prevents an ongoing incident like the one that occurred at the Aliso Canyon natural gas storage facility.

As we will discuss below, Mr. Krupp overreaches, exaggerates and uses cherry-picked data to paint a picture of the methane issue that is fundamentally untruthful.

The following fact check is in no way intended to diminish the urgency of stopping the emissions at Aliso Canyon, which may be completed as soon as this week. But it is important that the public has access to the facts without unnecessary fear-mongering.

CLAIM: “[Aliso Canyon] may be the worst environmental disaster in the U.S. since the Deepwater Horizon oil spill in the Gulf of Mexico in 2010. One difference is that Aliso Canyon hasn’t caused any loss of life.”

FACT: This comparison is inappropriate and an overstatement to say the least. Porter Ranch is a local emergency, to be sure, especially since several families may end up temporarily relocated, but according to the Los Angeles County Department of Public Health:

“Methane levels measured in the community are above those normally observed, but are below flammable levels and are not expected to cause any health effects.” [emphasis added]

CLAIM: “Aliso Canyon deserves national attention, not least because uncontrolled emissions of methane—a greenhouse gas 84 times more potent than carbon dioxide over a frame of 20 years—are endemic throughout the oil and gas industry. What’s happening now in California, a massive leak resulting from well failure, is only an extreme example.”

FACT: Again, hyperbole is used, along with selective math, to overstate the case. EDF chooses arbitrarily to use a 20-year timeframe to make the impact of methane seem more dramatic than it is. The standard in greenhouse gas (GHG) analyses – including the federal Greenhouse Gas Inventory – is based on a 100-year time frame, in which methane is 25 times more potent than carbon dioxide (CO2).

But most importantly, the Aliso Canyon incident was caused by the failure of equipment located in a single underground storage facility for natural gas produced out-of-state. To cite this incident and then try to imply that “uncontrolled emissions” happened prior to this equipment failure, and, indeed, are “endemic” in the industry is simply false and, in fact, contradicted by EDF’s own research.

Multiple studies conducted by EDF have concluded that methane emissions from natural gas production are far below the level that would reverse natural gas’ climate benefits. One example is a report, which EDF did in partnership with the Rhodium Group last year that found methane leakage rates across the country to be about 1.3 percent. Another EDF study, this one in partnership with the University of Texas, found leakage rates from natural gas production to be 1.5 percent.

Indeed, four of the studies in the chart below are EDF-sponsored studies, and all show leakage rates far below the 3.2 percent threshold at which the climate benefits of natural gas begin to wane. 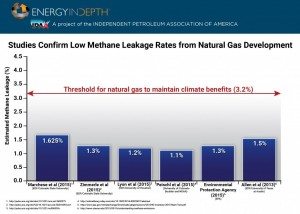 CLAIM: “The Environmental Defense Fund, which I lead, has worked with over 100 partners in industry and academia on the most comprehensive peer-reviewed studies ever conducted on methane emissions. What we found is that methane leaks happen all across the oil and gas system—at production sites and processing plants, in pipelines and storage facilities. And though natural gas releases half as much carbon as coal when burned, these leaks erode much of that advantage. The methane now being released from Aliso Canyon each day causes as much climate damage as the daily emissions from four coal-fired power plants.”

FACT: Mr. Krupp acknowledges EDF’s extensive work on methane in partnership with academic institutions and industry, but fails to mention that all these studies have found very low emissions, even though the researchers specifically sought out what EDF calls “super-emitters.”

In fact, contrary to Mr. Krupp’s narrative, methane emissions have dropped dramatically as oil and gas production has increased: 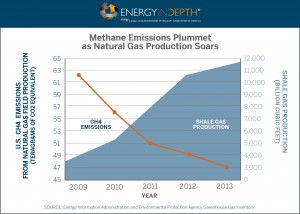 Indeed, the U.S. Environmental Protection Agency (EPA) has concluded that methane emissions have fallen 16.9 percent since 1990 and the Intergovernmental Panel on Climate Change (IPCC) has noted that as an effect of more power plants converting to natural gas, “recent lifecycle assessments indicate that specific GHG emissions are reduced by one half.”

We have no quarrel with Mr. Krupp’s assessment of the scope of methane that has been released at Aliso Canyon. But, again, this is separate and apart from his claims that there is rampant leakage throughout the industry, when in fact EDF itself has documented the dramatic methane emissions.

CLAIM: “Other leaks across the country may be smaller individually, but they add up to an estimated eight million tons of annual methane emissions. Those annual emissions will have the very same climate impact as the annual emissions from 160 coal plants during the next two decades.”

FACT: The use of large, yet out of context, numbers to scare people is an old trick. But the fact is that methane emissions from oil and natural gas systems in the United States account for only 3 percent of total U.S. GHG emissions; exploration and production operations are about 1 percent of the U.S. total.

Further, total oil and natural gas systems methane emissions have fallen below agricultural methane emissions. In other words, the emission reduction trend in the oil and gas industry is going in the right direction and overstating the problem in an attempt to scare people is not constructive. Remember, even Los Angeles County health officials say the methane emissions in Porter Ranch – although large – are “not expected to cause any health effects.” [emphasis added]

CLAIM: “Yet even with Aliso Canyon gushing methane as you read this, many in the industry are fighting rules that would reduce leaks. They call for a “voluntary” approach that simply won’t fix the problem—or shore up public trust. Only rules that apply to all operators will work, and they can do it at low cost. Recent studies in the U.S., Canada and Mexico by ICF International indicate that existing technology can cut methane leaks by between 40% and 54% at an average cost of a penny per thousand cubic feet of gas produced—about one-half of 1% of today’s price for that much gas. Stopping at least 45% of leakage globally would help the climate over the next 20 years as much as shutting down one-third of the world’s coal-fired power plants.”

FACT: While it is no surprise that an environmental group would call for expanded regulation, according to the EPA, U.S. methane emissions from natural gas production have fallen 38 percent since 2005 while natural gas production has increased by 26 percent largely thanks to producers’ voluntary efforts.  The EPA acknowledges this in its 2015 Greenhouse Gas Inventory:

“The decrease in production emissions is due to increased use of plunger lifts for liquids unloading, from regulatory reductions such as reductions from hydraulically fractured gas well completions and workovers resulting from the 2012 New Source Performance Standards (NSPS) for oil and gas, and from a variety of voluntary reduction activities.” (emphasis added)

CLAIM: “State leadership is crucial. In Colorado, new standards require companies to take simple steps, such as equipment and procedures to detect and fix leaks, that will prevent the release of over 100,000 tons of methane and 90,000 tons of volatile organic compounds each year. That’s the same effect as taking all of Colorado’s cars and trucks off the road, year after year. When the rules were put in place, in 2014, some warned that they would wreak economic havoc. Those worries were misplaced. For example, one company operating in the Denver-Julesburg Basin, Noble Energy, said in 2015 it spent about $3 million on compliance, out of a capital expenditure that year of about $1 billion.”

Mr. Krupp fails to recognize two key points in the exploration and production segment of the oil and natural gas industry.  First, unlike other manufacturing operations, exploration and production operations decline over time and have to be retired; new wells must be developed.  Second, 80 percent of U.S. oil wells and two-thirds of U.S. natural gas wells are marginal, small business operations that cannot absorb the regulatory costs that Mr. Krupp endorses.  Moreover, these small producing wells are not significant in the emissions inventory.

By 2025 all of the wells that won’t be covered by the promulgated or proposed federal requirements will be marginal wells.

One can only conclude that if Mr. Krupp wants to demand the regulation of these small wells, his purpose is to shut them down and eliminate 20 percent of US oil production, 12 percent of US natural gas production and put many small businesses out of business.  And, if Mr. Krupp is so aggrieved by voluntary control programs, he may want to turn some attention to the agricultural methane emissions which are only addressed by voluntary programs.

Considering that methane from oil and gas systems accounts for roughly only 3 percent of all U.S. greenhouse gas emissions it’s curious that EDF continues to focus all its attention on an industry that has low and declining methane emissions  – and is the primary reason the United States is leading on climate.

The bottom line is that it’s thanks to fracking and the increased use of natural gas that the United States has dramatically reduced greenhouse gas emissions. The Intergovernmental Panel on Climate Change (IPCC) has said that even taking into account methane emissions, natural gas, brought about by fracking, is an “important reason” for the United States’ significant decline in emissions. According to the Energy Information Administration (EIA) natural gas has prevented more than one billion metric tons of carbon dioxide from being emitted from power plants, bringing U.S. greenhouse gas emissions to a 27-year low.

One would think EDF would celebrate that success instead of using hyperbole to confuse the issue and spread misinformation about methane emissions.

EDF often takes a realistic and fact-based approach to policy issues but it is a shame that the organization has used the incident at Porter Ranch as an opportunity to mislead readers of the Wall Street Journal into believing that the incident itself is health-threatening or that further regulation (on already successful methane reduction efforts by oil and gas-producing companies) is necessary.