Environmental Think Tank: With Pro-Gas Policies, the US can “Outperform” Paris Emission Targets

Many environmentalists have bemoaned the election results as nothing short of a “nightmare” for international efforts to address climate change. But a new report by researchers that Time Magazine has called “heroes of the environment” illustrates why that view is actually irrational.

Ted Nordhaus and Jessica Lovering of the environmental think tank, The Breakthrough Institute, ask the question in a new analysis: “Does Climate Policy Matter?” The answer is an emphatic “no.” The report finds CO2 reductions have thus far been driven by market forces rather than “emissions targets and timetables or international agreements intended to legally constrain national emissions.” To put it another way, increased use of natural gas — not government policy —has driven down emissions and will likely to continue doing so in the future, regardless of the political landscape. From the report,

“… if results to date are any guide, real progress on decarbonization primarily depends upon specific domestic energy, industrial, and innovation policies, not emissions targets and timetables or international agreements intended to legally constrain national emissions.”

“It’s certainly possible that a Trump administration will drop the Clean Power Plan and renege on the Paris accord. But as long as it keeps the nation’s nuclear power plants online, continues tax incentives for wind and solar energy and stays out of the way of the shale revolution… the United States might outperform the commitments that the Obama administration made in Paris…” (emphasis added)

Indeed, publicly available data show the U.S. is already on pace to meet its Paris commitments even without the implementation of the Clean Power Plan, which the report notes would only serve to codify a coal-to-gas transition that has been underway in the power sector for more than a decade, as the following graphic from a recent U.S. Department of Energy report illustrates. 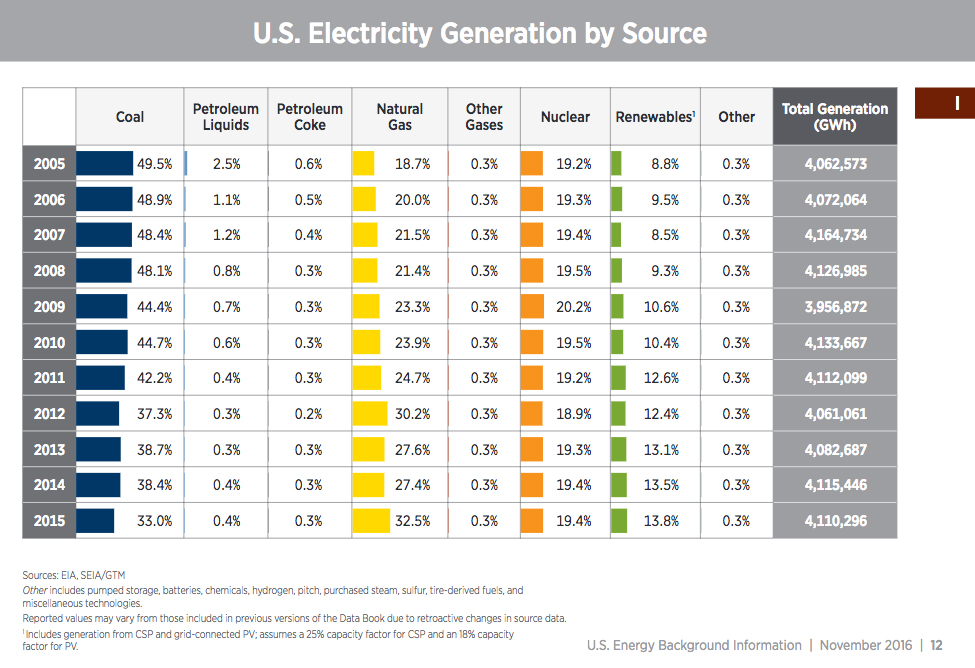 As the above graphic shows, natural gas’ share of total U.S. electrical generation has increased 76 percent during since 2005. And experts agree this is the No. 1 reason why energy-related CO2 emissions have declined 12 percent since 2005.

The U.S. Energy Information Administration (EIA) recently noted the current shift of electrical generation fuels to natural gas has accounted for 68 percent of the total reduction in U.S. energy-related CO2 emissions during last decade. The Breakthrough Institute (BTI) has previously found that natural gas has prevented 17 times more carbon dioxide emissions than wind, solar, and geothermal combined. And a recent report by the Manhattan Institute shows that for every ton of CO2 emission reductions attributable to solar power, 13 tons can be attributed to natural gas. 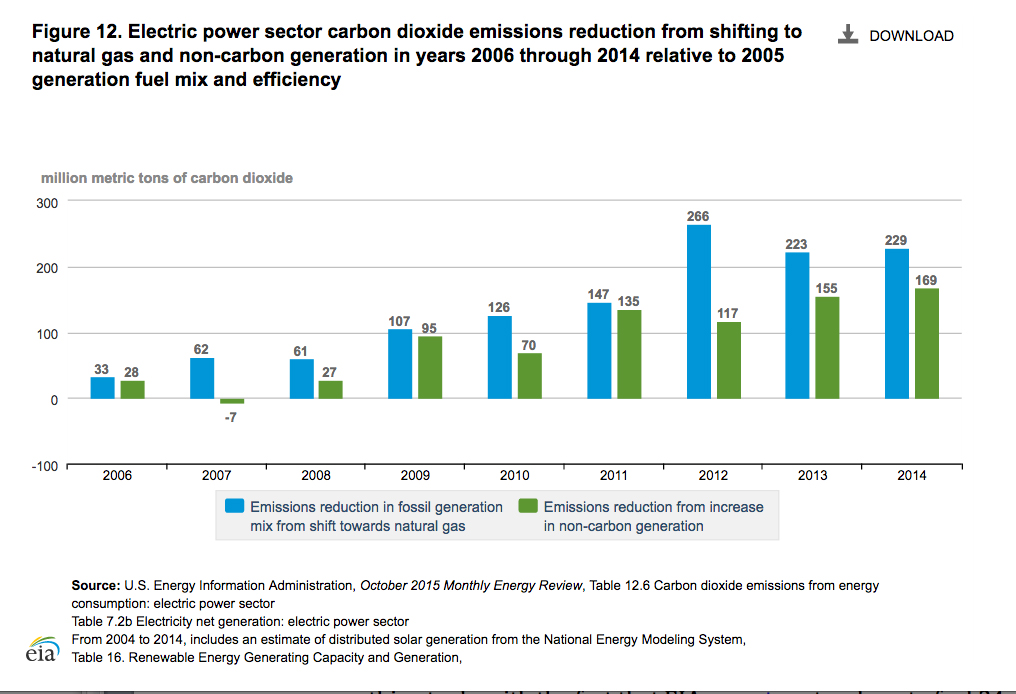 Supporting the Breakthrough Institute analysis’ topline conclusion, these reductions have come without the U.S. ratifying the Kyoto Protocol or adopting the Waxman-Markey cap-and-trade bill that failed to pass the U.S. Congress in 2010.

In fact, the Breakthrough Institute report points out that the proposed emission cap in that bill would have been higher than actual emissions have proven to be to date, as the following graphic from the report illustrates. 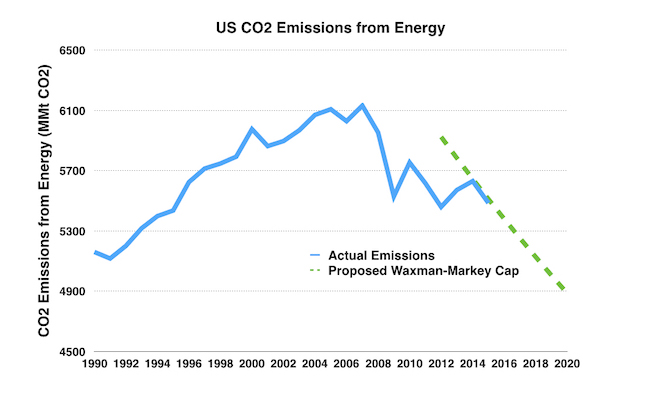 The analysis even finds that U.S. CO2 emissions might have been higher had the cap-and-trade bill passed,

“By some accounts, moreover, emissions might have fallen more slowly had Waxman-Markey been enacted due to the over-allocation of free emissions credits and a number of other provisions that would have supported coal generation in the early years of the policy.” 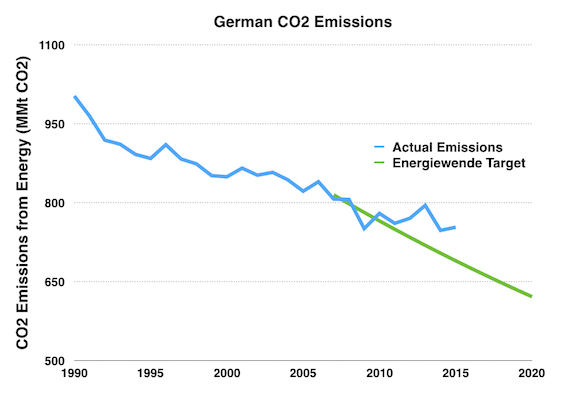 The Breakthrough Institute analysis also notes that the United Kingdom appears to be the lone exception of a country actually seeing success reducing CO2 emissions via government policy, but also notes that success has been thanks in part to efforts to increase natural gas use,

“In most other cases, climate commitments and policies have had little or no discernible impact upon emissions.”

This analysis led to the New York Times — of all media outlets — to publish a story headlined “Trump’s Climate Policies May Work Out in the Planet’s Favor,” with author Eduardo Porter conceding,

“For all his promises to bring back coal jobs in Appalachia, Mr. Trump might be drawn in a different direction by his own objectives of promoting natural gas and achieving energy independence. If he gives those goals high priority, he could well end up pursuing policies that would ultimately lower carbon emissions.”

The analysis even notes, “By contrast, a Democratic administration indifferent to the fate of the nation’s existing nuclear fleet and hostile to shale gas production might ultimately slow US decarbonization trends.”

This prompted Berkeley physicist Richard Muller, a well-known pragmatist with regard to natural gas, to say,

“Carbon-dioxide emissons will be lower under Trump than they would have been under Clinton. Trump appears to favor nuclear power and shale gas, and both reduce carbon emissions substantially, at least when compared to coal. If you are optimistic about solar and wind, then you can say that shale will not reduce emissions as much as solar and wind would have. I saw no similar support for these energy technologies from Clinton, who seemed to agree with the Obama approach: don’t oppose, but don’t reduce the impediments.”

These developments — made possible by natural gas — should really come as no surprise at this point.

A recent Global Carbon Project (GCP) report notes the U.S. saw its CO2 emissions decline 2.6 percent from 2014 to 2015 despite using more oil and gas last year. This is no coincidence considering natural gas overtook coal as the top source of electrical generation for the first time last year. The U.S. is also projected to see its carbon emissions decline another 1.7 percent in 2016, according to the report, as U.S. energy-related CO2 emissions fell to their lowest levels since 1991 during the first six months of 2016.

We’ve reduced our overall CO2 emissions a whopping 11.5 percent from 2005 levels — giving us the distinction of being the only major country to see carbon reductions during that timespan. And more remarkably, the current three-year trend of flat worldwide CO2 emissions and declining U.S. emissions detailed in the GCP report has come at a time in which both the U.S. and world economy has grown 15 and three percent, respectively, an unprecedented trend. And although environmentalists often incorrectly claim that methane emissions from oil and gas development outweigh the CO2 reductions the U.S. has achieved recently, EPA data shows that overall methane emissions are down six percent since 1990.

All of this points to the fact that the U.S. is setting the tone for the rest of the world in terms of GHG emissions thanks to the shale revolution. No wonder Robert Stavins of Harvard University echoed the conclusions of this Breakthrough Institute analysis when he recent said, “The most important factor in terms of carbon emissions in the United States is the price of natural gas” rather than any government scheme or regulation.