As the U.S. Environmental Protection Agency (EPA) continues to press on with its costly methane regulations on the oil and natural gas industry, more and more evidence that the rules are unnecessary continues to surface — including data from the EPA itself.

The agency’s latest Greenhouse Gas Reporting Program data, released this week, show that methane emissions from larger oil and natural gas facilities continue to plummet. According to the EPA, methane emissions from reporting facilities in the petroleum and natural gas systems sector declined 3.7 percent from 2014 levels in 2015 and are down 16 percent from 2011 levels, as the following EID graphic illustrates. 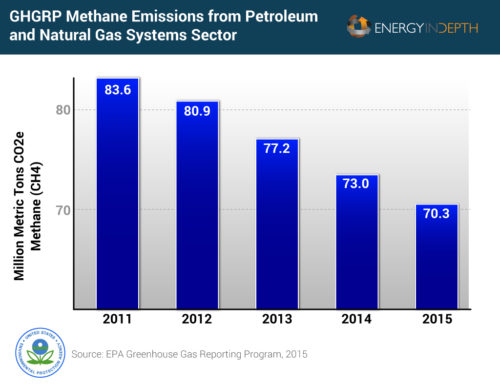 EPA’s latest GHGRP data also show that total GHG emissions from the petroleum and natural gas systems sector are down 1.6 percent (231.4 down from 235.1) from 2014 levels. 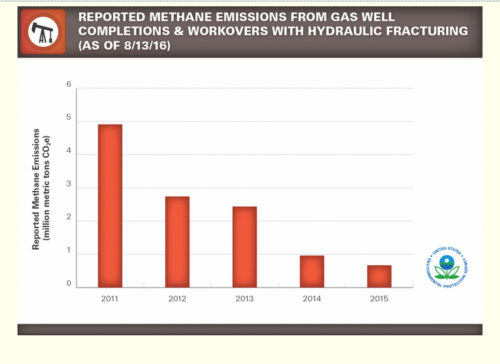 The GHGRP includes emissions data from the more than 2,400 oil and natural gas system facilities that emit 25,000 million metric tons or more of greenhouse gases on an annual basis. This includes production, processing, pipelines, storage, distribution and import/export facilities.

This new data raises an obvious question: How has EPA determined that methane emissions from oil and natural gas systems have gone up according to its latest Greenhouse Gas Inventory (which used new methodology to upwardly revise emissions by 34 percent)?

The short answer: Manipulation of data from smaller facilities.

As EID covered back in April, EPA is now assuming that smaller facilities that do not report to the GHGRP have similar emissions rates as larger ones. So EPA basically extrapolated data from large facilities reported on subpart W of the GHGRP onto smaller facilities for which it did not have solid data. This is obviously not a sound method to calculate emissions, resulting in a significant overestimation of emissions in EPA’s latest Greenhouse Gas Inventory.

According to EPA data, the natural gas methane leakage rate is roughly 1.5 percent, which falls in line with several studies spearheaded by the Environmental Defense Fund (which, ironically, is pushing for regulations based on the notion that emissions are higher than previously believed), as well as studies by University of Colorado at Boulder/NOAA, MIT and the University of Maryland. The U.S. Department of Energy, Carnegie Mellon and Cornell University found very low methane leakage rates ranging from 1.2 percent to 1.6 percent, which is far below the threshold (2.7 percent) for natural gas to be substantially beneficial for the climate.

A study was recently released showing that biogenic sources —virtually ignored by environmentalists in their efforts to “combat climate change”— are actually to blame for the recent increase in global methane emissions. Another study released in March reached exactly the same conclusion.

Considering EID research has shown EPA’s methane regulations will have virtually no climate impact — reducing global temperatures a mere four one-thousandths of one degree by the year 2100 — it would seem reasonable for environmentalists to turn their attention to more important matters.