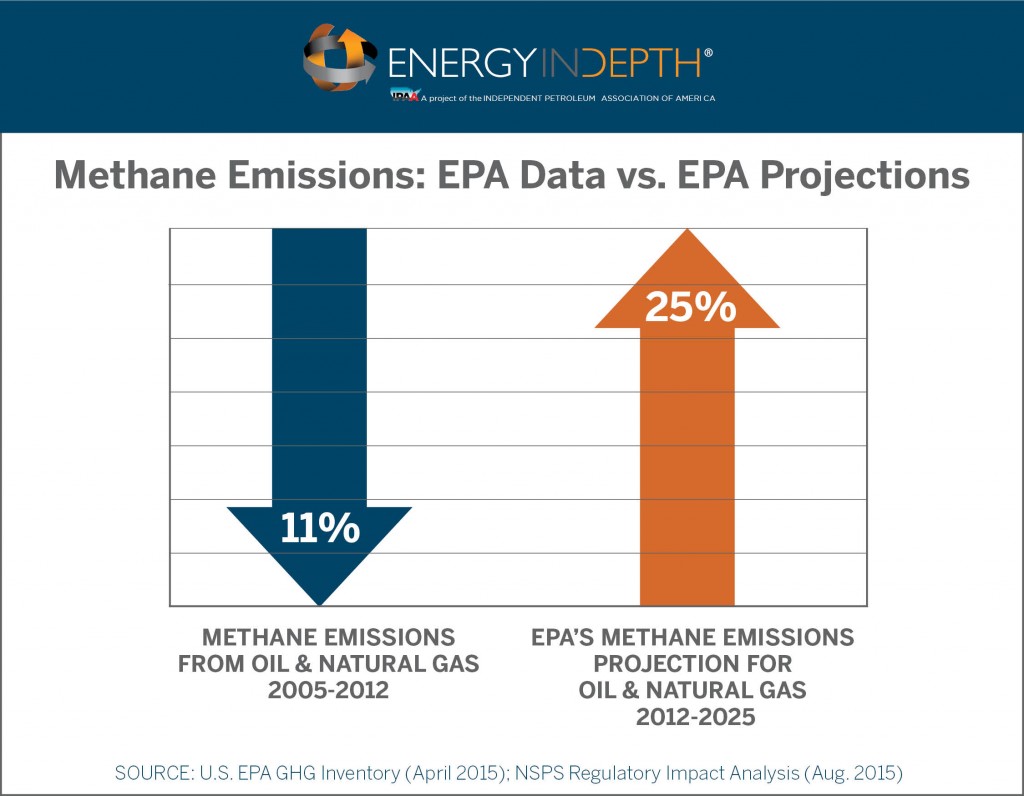 New regulations from the U.S. Environmental Protection Agency (EPA) targeting methane leaks from fracking and other oil and natural gas activities are based on a flawed assumption of emissions growth, according to a new analysis by Energy In Depth. EPA has claimed that methane emissions from the oil and natural gas sector will increase by 25 percent over the next decade, alongside an increase in newly drilled wells, but methane emissions have fallen over the past decade as the number of new U.S. wells has skyrocketed.

Despite the importance of these emissions estimates, the EPA has provided no explanation as to why emissions will change trajectory and begin increasing significantly over the next decade. The EPA’s claim about rising emissions was reprinted widely in the press when the proposed rule was announced, but it was presented without any scrutiny.

The potential inflation of emissions suggests that the EPA is also underestimating the cost of the rule and overestimating its benefits, as the agency ascribes monetary value to emissions avoided with the new regulation in place.

EID reviewed EPA’s documents related to the rulemaking, including its Regulatory Impact Analysis (RIA), the agency’s Greenhouse Gas Inventory, and the U.S. Energy Information Administration’s 2014 Annual Energy Outlook, on which the EPA based its projections for new drilling activity.

Nevertheless, on September 18, 2015, the EPA published its proposal to “amend the new source performance standards (NSPS) for the oil and natural gas source category by setting standards for both methane and volatile organic compounds (VOC) for certain equipment, processes and activities across this source category.” EPA has also claimed that methane emissions from oil and natural gas activities “are projected to increase by about 25 percent over the next decade if additional steps are not taken to reduce emissions from this rapidly growing industry.”

EPA estimated the average emissions for each segment to be covered by the amended NSPS, and then determined how many of those segments will exist, based on a ten year average of prior drilling activity. By multiplying the number of each of the segments by their respective emissions estimates, EPA can project what level of methane emissions will come from each of the affected facilities. In this case, emissions estimates were made for the years 2012 (base), 2020, and 2025.

To determine the number of facilities potentially impacted, the EPA relies heavily on data from the U.S. Energy Information Administration (EIA), the statistical arm of the U.S. Department of Energy. According to EPA’s Regulatory Impact Analysis (RIA) for its NSPS amendments:

“The EPA has projected affected facilities using a combination of historical data from the U.S. GHG Inventory, and projected activity levels, taken from the Energy Information Administration (EIA’s) Annual Energy Outlook (AEO). The EPA derived typical counts for new compressors, pneumatic controllers, and pneumatic pumps by averaging the year-to-year increases over the past ten years in the Inventory. New and modified hydraulically fractured oil well completions and well sites are based on projections and growth rates consistent with the drilling activity in the 2014 Annual Energy Outlook.” (p. 3-9; emphasis added)

EPA’s analysis breaks down different parts of the exploration and production process that would be subject to the new NSPS requirements, including pumps, compressors, and pneumatic controllers, among other facilities further along the supply chain. However, since EPA’s proposed rule will only impact new facilities, the number of new wells drilled can serve as a proxy for assumptions related to EPA’s methane calculations. According to a chart from ICF International, an organization that EPA acknowledges “contributed data and analysis” to its regulatory cost estimates, more than half (54 percent) of the methane emissions from oil and natural gas systems come from processing, transmission, and distribution networks.

The buildout of additional infrastructure, including the aforementioned facilities, will accompany newly drilled wells, although some of the facilities, such as compressor stations, will serve multiple wells, making a one-to-one ratio of new-wells-to-methane-emissions inappropriate. For that reason, EPA’s projections show methane emissions increasing by a smaller percentage (25 percent) than the percentage increase in new wells (40 percent).

The key problem with EPA’s projections is that EPA’s own data show increased oil and natural gas activity does not necessarily correspond with an increase in methane. In fact, increasing well counts have coincided with a dramatic decrease in methane emissions over the past decade.

EPA claims that methane emissions will increase by 25 percent over the next decade, coinciding with an increase in drilling activity from “this rapidly growing industry.” But from 2005 to 2012, EPA’s own data show that the number of oil and natural gas wells increased by 7.5 percent, while methane emissions decreased by about 11 percent. 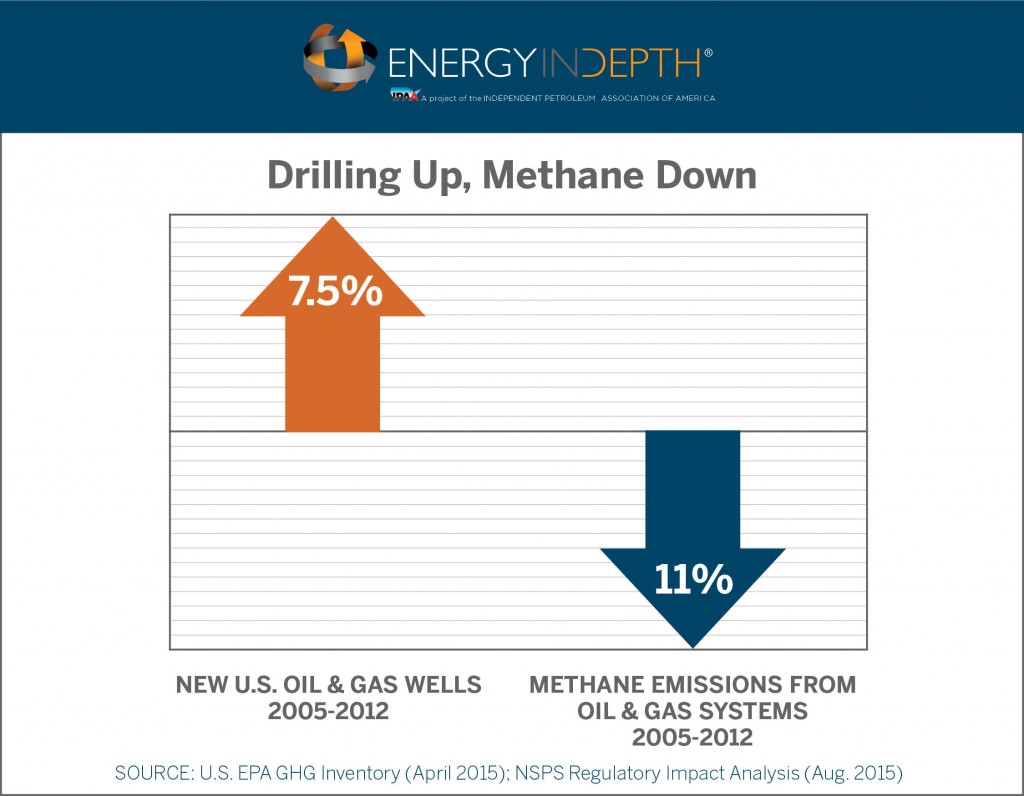 This raises serious questions about EPA’s assumption that methane emissions will increase substantially over the next decade unless new regulations are implemented. Indeed, over the past decade, methane emissions have fallen in the absence of the rule that EPA is now attempting to justify.

Furthermore, in 2012, the EPA moved forward with a different rule that targets volatile organic compounds (VOCs) from hydraulically fractured natural gas wells, which was finalized on December 31, 2014. The agency touted that regulatory change in part for its “co-benefit” of reducing methane, which the EPA factored into its cost-benefit estimates, since the technologies and equipment necessary to reduce VOCs will also capture methane.

EPA’s miscalculation of estimated emissions would also impact the agency’s cost-benefit justification for the rule. According to the EPA, the rule is a “commonsense” measure that will “yield net climate benefits of $120 to $150 million in 2025.” This monetary benefit, as calculated by EPA, is directly proportional to the amount of methane that EPA suggests would otherwise be emitted. In essence, EPA is estimating the proportional value of avoided impacts from global warming.

As part of its cost-benefit calculation, EPA projected the costs of installing new equipment, a portion of which is offset by captured methane, which can then be sold (methane is the main component of natural gas). According to EPA’s RIA, the “total annualized engineering costs” of the new rule are between $370 million and $500 million in 2025. But the net cost is estimated to be between $320 million and $420 million, which means EPA estimates the value of captured methane to be between $50 million and $80 million.

To estimate this value, EPA assumes “a wellhead natural gas price of $4/thousand cubic feet (Mcf).” Since 2012, the base year for EPA’s emissions projections, natural gas spot prices have averaged about $3.44/Mcf. In its analysis of EPA’s Clean Power Plan, released earlier this year, EIA projects that natural gas prices may not reach $4/Mcf until after 2030, based upon a high oil and natural gas resource base assumption. EPA’s analysis of its methane rule only extends to 2025, meaning the agency’s assumption about $4/Mcf gas may never materialize in the projection period.

Importantly, EIA’s projections were not based upon the final Clean Power Plan, but rather the initial draft from 2014. Early assumptions were that the Clean Power Plan would heavily boost demand for natural gas, which would in turn put upward pressure on prices. But the final version relies much less on natural gas and more on renewables. According to EPA data compiled by the American Wind Energy Association (AWEA), a heavier reliance on renewables could result in natural gas prices that are at least 12 percent lower than what would be expected under EPA’s base case projection.

EPA also acknowledges in its RIA that a $1/Mcf change in price of natural gas translates to as much as a $19 million difference in its cost estimate. In other words, if natural gas prices averaged $3/Mcf instead of $4/Mcf, EPA could be overestimating revenue by roughly 24 percent. Based on the current 2012-2015 average natural gas spot price of $3.44/Mcf, EPA would be overestimating revenue by about $10.6 million. Under the “high renewables” scenario in the Clean Power Plan, which would depress natural gas prices even further, EPA’s overestimate would be even higher.

The additional costs could be devastating for an industry already suffering from a market downturn in commodity prices. An analysis by Oppenheimer & Co., for example, already found that EPA’s methane rule could wipe out smaller drillers across the United States.

“The EPA derived typical counts for new compressors, pneumatic controllers, and pneumatic pumps by averaging the year-to-year increases over the past ten years in the Inventory. New and modified hydraulically fractured oil well completions and well sites are based on projections and growth rates consistent with the drilling activity in the 2014 Annual Energy Outlook.” (p. 3-9; emphasis added)

This assumption is problematic for a number of reasons, the most obvious of which is the fact that drilling efficiency has skyrocketed, and the increased use of higher-producing horizontal wells in shale basins has allowed for major improvements in production per drilling rig. That means fewer individual wells are needed today to maintain or even increase production, especially in relation to the number of wells needed to achieve those production levels less than a decade ago.

In other words, how the United States produced its oil and natural gas ten years ago has changed dramatically, and thus projections based on data from a decade ago are almost certainly wrong.

This can be demonstrated in two of the most prolific tight oil-producing regions in the United States: the Eagle Ford in south Texas, and the Bakken in North Dakota and Montana.

According to the U.S. EIA, the drilling rig count peaked in both of these basins in early 2012, and then largely leveled off until oil prices began falling in late 2014 and early 2015, at which point rig counts dropped. But EIA data also show that production in both the Eagle Ford and Bakken has doubled since 2012. 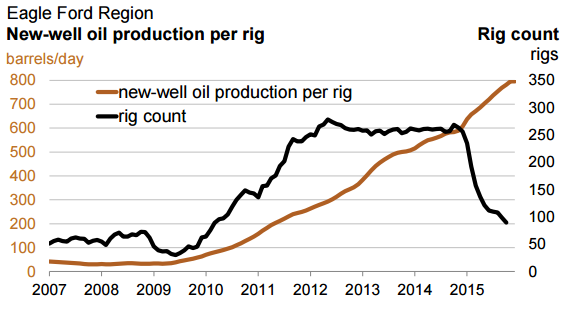 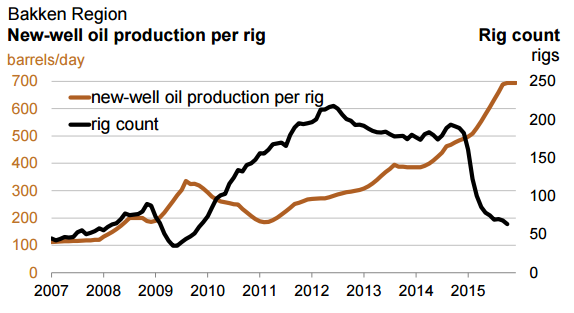 In 2007 and the years immediately following, oil production from new wells in the Eagle Ford and Bakken aligned closely with the rig count. But within a few years, those two components began diverging as new-well oil production per rig has increased, while rig counts have fallen. This reflects not only how oil and natural gas production has become more efficient, but also how different onshore oil and natural gas development is today compared to what it was just a few years ago.

To be sure, EPA’s well count assumptions are presumably based on EIA’s data, while its ten-year averages refer to associated infrastructure. While a new compressor station, for example, does not have to be built for every well drilled, per-well efficiency gains and other significant changes in how oil and natural gas is produced raise legitimate concerns about EPA’s reliance on data that do not reflect current operations. The use of these data, in turn, are impacting EPA’s emissions projections, and by extension the agency’s cost-benefit calculations.

EPA’s proposal to amend the NSPS for oil and natural gas systems could have a significant impact on American energy production. But it appears that EPA has inflated its benefits calculations through a combination of flawed emissions projections that contradict its own data, and an overestimate of the value of methane that would be reduced under the rule.

As Energy In Depth has outlined before, EPA’s proposed methane regulation appears to be a solution in search of a problem, and a costly mandate that is inconsistent with the findings of several recent peer-reviewed studies. 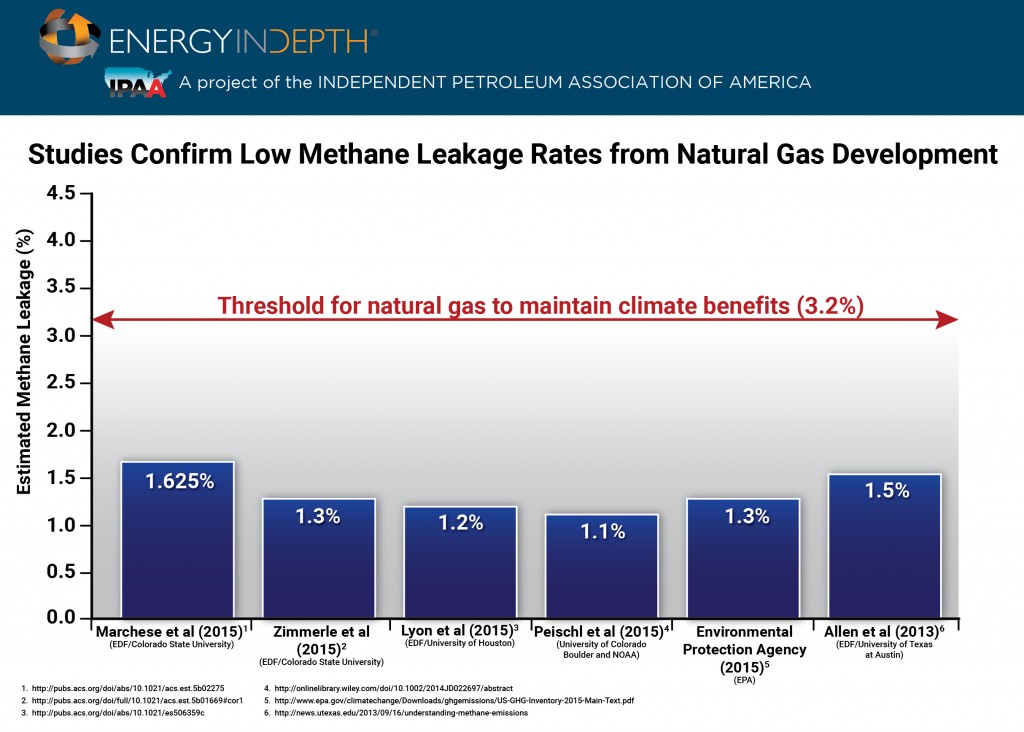 Most recent peer-reviewed studies, as well as data from the U.S. EPA, show methane leakage is far below the threshold (3.2%) at which scientists have said natural gas may lose its greenhouse gas advantage.

If the EPA is going to move forward with a new methane rule, it should be based on science and accurate data. As this brief analysis suggests, EPA’s plan to amend the NSPS leaves significant room for improvement.