It took less than three months for Ohio Gubernatorial Democratic candidate Dennis Kucinich to realize that running on a platform to “stop oil and gas development” was a bad idea. So bad in fact, that he skipped his keynote speech at the first event held by the fake Tri-County Landowners Coalition this weekend. Is Kucinich running from his policy to end oil and gas development in Ohio because all of his fellow Democratic gubernatorial opponents have disagreed with him? Or did he skip the so-called “leasing forum” because they couldn’t even muster 20 people to attend? In either event, it was another epic fail for the fringe environmental activists and highlights, yet again, that Ohio soundly supports oil and natural gas development.

You may recall that on Jan. 17 the “moonbeam congressman” announced his candidacy for Ohio governor. Just eight days later, Kucinich launched a media stunt where he unveiled his most pressing policy issue — to end all Ohio oil and gas development. After a string of media hits statewide and nationally, Kucinich faced off with his fellow Democratic gubernatorial candidates in a sequence of debates where each candidate unabashedly challenged Kucinich on his call to ban fracking. As the Toledo Blade correctly stated,

“And then there was Mr. Kucinich who pretty much wrote off all of eastern Ohio by proposing to ban fracking, the most promising economic activity in that part of the state. “

The Columbus Dispatch reported that one of Kucinich’s opponents, Former U.S. Consumer Financial Protection Bureau Director Richard Cordray, responded to his call to end oil and gas this way,

“[A]n extreme position will lose us eastern Ohio for a generation and dismisses the fact that there are many small landholders there with an oil or gas well on their property (that) is their sole means of livelihood.”

During the same period of time, a small group of fringe environmental activists launched the fake Tri-County Landowners Coalition. As EID has been documenting, this group has become more and more clear of its real intentions, which became crystal clear at the aforementioned so-called “leasing forum” that Kucinich ditched.

Immediately following the event, Youngstown-based Frack Free, which is backed by the Community Environmental Legal Defense Fund, proudly took credit for the so-called “leasing forum,” where one of the few participants commented on social media that they were advised “not to lease” their minerals for oil and gas development. This is noteworthy because it highlights two key facts. First, it confirms the fake landowner coalition was put together by Frack Free, as EID suspected. Second, the goal of this group is to stop all oil and gas development, not help landowners negotiate leases in Richland, Ashland, and Holmes counties. But don’t take our word for it, see for yourself: 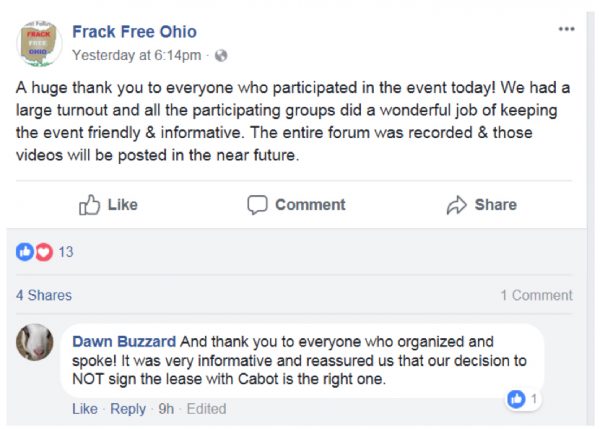 With not even 20 people attending this charade and the “moonbeam congressman” ditching on them, it seems that, Frack Free has had yet another epic fail with this so-called “leasing forum,” similar to CELDF’s ongoing Youngstown defeats. As for Kucinich, we aren’t surprised that he has toned down his big anti-fracking campaign in Ohio. Just like the 20 people who attended the forum, he’s quickly found himself on an island.