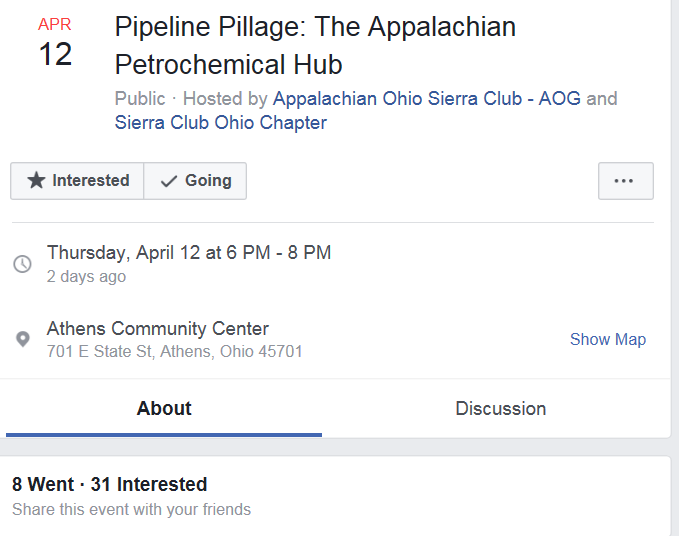 The event’s dismal attendance cannot be blamed on a lack of publicity, as the event was featured in the newspaper and across the group’s social media platforms.  However, these efforts were so ineffective that the Sierra Club has since yanked the event off its webpage, likely hoping nobody would notice that no one showed up! Newsflash, Sierra Club: Considering your event’s attendance, it’s clear no one even noticed when the event was on the webpage.

Taken together, these two events further highlight the fact that the Sierra Club has no traction in the Appalachian Basin — particularly in Ohio and West Virginia. The people who actually live and work in these states are wise to the Sierra Club’s “Keep It In The Ground” agenda, preferring the economic and environmental benefits provided by shale development over the misinformation touted by Sierra Club and similar fringe environmental activist groups.  As Belmont County Port Authority (BCPA) Executive Director Larry Merry told EID,

“Most of the Sierra Club leaders I know were given a sock full of money from their trust funds and billionaires in California, and now they don’t want any of the rest of us to have anything in Appalachia. They don’t want to give us a chance.” (Emphasis added)

This sentiment is echoed from county to county along the Ohio River, and it’s why fringe environmental activists have struggled to gain any influence in this region of the country. Even when these groups pay attendees to show up, they fail to make any significant headway, as they are so far removed from understanding the local men and women who support and depend on oil and gas development – especially since the introduction of shale development. Perfectly illustrating this fact, the “petrochemical hub” that Sierra Club’s April 12 event was fighting against could lead to an estimated 100,000 permanent petrochemical-related manufacturing jobs in Kentucky, Ohio, Pennsylvania, and West Virginia, according to a new report by the American Chemistry Council.

Good luck finding anyone in the Ohio Valley – or any rational person, for that matter – who would sacrifice these good paying jobs and economic security in order to perpetuate an anti-fossil fuel agenda.