The European Union climate policy chief Frans Timmermans recently expressed support for phasing down all fossil fuels, a move that seemingly runs counter to the efforts this year by many EU countries to increase access to diverse sources of natural gas and oil as sanctions were enacted against Russia.

“We are in support of any call to phase down all fossil fuels.”

His announcement comes following India’s call to build off last year’s COP26 agreement to phase down coal and expand the commitment to encompass all fossil fuels. While India has incentive to divert attention away from coal consumption specifically, the EU’s support for phasing down all fossil fuels is disadvantageous from both an economic and climate perspective. Timmermans’ comments stand inconsistent with Europe’s recent actions and ignore the needs of EU citizens during an unprecedented energy crisis.

A Reuters article points out the irony in Europe’s support of a global phase down of all fossil fuels:

“Timmermans’ comments come even as the EU ramps up its quest for coal and natural gas in the near term to counter an energy supply crunch triggered by high demand and supply disruptions since Russia’s invasion of Ukraine.”

Following Russia’s invasion of Ukraine, natural gas delivered via pipeline to Europe from Russia dramatically decreased, leading to an energy supply shortage and spiked prices. In August, the continent was paying on average eight times more for natural gas than the United States.

Increased energy prices have serious implications for the wellbeing of those affected, especially more vulnerable populations. This summer, price spikes forced an unprecedented number of citizens to choose between purchasing groceries and cooling their home. In addition, these spikes caused governments to place mandates on building heating and cooling temperatures. As a result of the ongoing crisis, one in three households in the United Kingdom are expected to be pushed into energy poverty this winter.

Europe understood the need to respond to its energy crisis and quickly began siphoning energy products from other parts of the globe. The United States played a key role in increasing the continent’s energy supply and lowering prices by fast-tracking LNG shipments. As the graph below displays, these efforts to increase fossil fuel consumption led to a strong decrease in the price of natural gas. 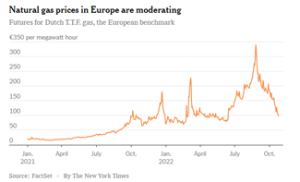 Adding to the disconnection, the EU wisely began building new LNG terminals and taking control of refineries, bolstering its capacity to receive foreign energy supplies. Increased LNG terminals will not only decrease Europe’s reliance on foreign adversaries for natural gas, but also aid its efforts to permanently turn away from coal. Some countries that previously pledged to end coal use, such as Germany, were forced to turn on formerly retired coal plants to meet their citizens’ energy needs during the energy crisis. These longer-term strategic moves to build LNG capacity do not signal initiative to phase down fossil fuels, making Timmermans’ comments at COP27 more perplexing.

What’s more, natural gas can help other continents decrease their greenhouse gas emissions and ensure a coherent global strategy moving forward, just as it has done in the United States

As previously reported, emerging Asian markets are expected to dramatically increase their demand for LNG imports as a result of a switch from coal-to-gas. Rather than discouraging this transition, climate leaders should be applauding these decarbonization efforts.

The success of coal-to-gas switching has already been proven as a viable route to climate progress in the United States. Since 2005, the United States has realized a roughly 20 percent decrease in overall CO2 emissions while experiencing booming economic growth. 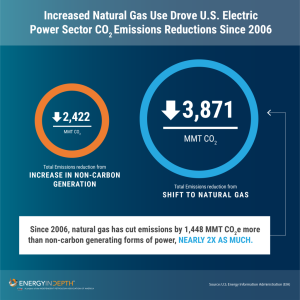 Bottom-line: As seen by Europe’s recent actions in response to their energy crisis, phasing down all fossil fuels is impractical and ignores the reality on the ground. Instead, countries should focus on efforts that promote energy security and decrease emissions in a stable and reliable manner. Boosting responsible oil and natural gas production can help increase global security, fight energy poverty, and continue to decarbonize economies across the globe.