American LNG exports to Europe are all the more essential since dwindling natural gas stockpiles and lower-than-anticipated wind generation have caused energy prices to spike.

Energy prices in Europe and the United Kingdom are surging in the wake of a shortage of natural gas and have reached levels not seen in a decade. This has already pushed energy prices up and warns of an expensive winter ahead. 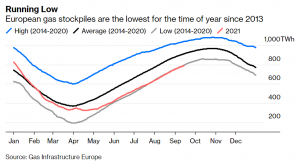 In Germany and France, energy prices in September were three to four times the 2019 average. Meanwhile, Britain is struggling to produce enough electricity after a spate of unusually calm weather stilled offshore windmills.

Stefan Konstantinov, senior analyst at ICIS Energy, told CNBC that the U.K. has been forced to restart gas- and coal-fired generators because of a lack of wind power:

“If there was enough wind, it could maybe meet more than half or two-thirds of U.K. power demand on a relatively low power demand day. But instead what we are seeing is that actually we’ve got no wind and we are forced to fire up polluting coal-fired generation.”

Last week, European natural gas futures surged to a record high of nearly five times their September 2019 levels. Meanwhile, heavy industry in the U.K and elsewhere is halting energy-intensive processes because of the high cost of energy.

The energy shortage has already forced the closure of two fertilizer plants in the U.K., a situation that sparked concerns about the possibility of a future food shortage. As the U.K. Telegraph reported:

“CF Industries, an American manufacturer of agricultural fertilizers, said on Wednesday that it was halting operations at its sites in Billingham, Teesside, and Ince, Cheshire, because of high gas prices. The two sites produce about 40 per cent of Britain’s fertilizer needs and account for 60 per cent of domestic production of commercial CO2. Sites in Europe are also halting operations.”

In Norway, commodities companies are also slowing the production of ammonia, which is produced from natural gas, citing high prices. Analysts with Goldman Sachs Commodities Research warned this week that industrial blackouts may occur during the winter if prices do not fall.

The situation illustrates the intermittency problem with renewables like wind and solar power and how outages can increase demand for fossil fuel generation. In Europe, which has been transitioning away from fossil fuels as part of its climate goals, supplies of natural gas are tight and prices are spiking, forcing many industries to severely curtail their energy use and sparking concerns about winter fuel supplies.

“Today’s situation is a reminder to governments, especially as we seek to accelerate clean energy transitions, of the importance of secure and affordable energy supplies – particularly for the most vulnerable people in our societies. Well-managed clean energy transitions are a solution to the issues that we are seeing in gas and electricity markets today – not the cause of them.”

Natural gas provides an ideal solution for a “well-managed clean energy transition” with its ability to quickly ramp-up or down when challenges arise for other energy resources – and U.S. LNG is an affordable option to ensure the EU has an abundant supply.

Europe Turns to the United States

U.S. LNG, which is both price competitive and has lower carbon intensity than gas produced elsewhere, is one possible answer to Europe’s energy supply crunch. U.S. shale production remains the main driver of global gas production and has the capacity to increase output and export volumes in the future.

For the European Union, which imports some 70 percent of its energy, a strong partnership with American producers is a key step to ensuring that energy is available when it is needed.

The alternative, as the bloc is seeing, may be dark nights and quiet factories during cold, still days.