Earlier this week Energy In Depth took an extensive look at the historic water quality in Susquehanna County, highlighting the documented cases of methane in local water supplies that date back to the 1700s. The jury for the Dimock alleged water contamination trial also had the opportunity to learn about this long history of methane in the water when Dr. Tarek Saba, the principal scientist and office director at Exponent Engineering and Scientific Consulting, took the stand. Saba concluded,

What qualifies Saba to draw such a conclusion? From his professional profile:

Dr. Saba has assisted and advised clients in cases involving waterway sediment sites, landfills, petroleum refineries, hydraulic fracturing, manufactured gas plants (MGPs), pulp and paper mills, salvage yards, manufacturing facilities, among other industrial setups. His scientific focus has been on the environmental contamination of soils, sediments, groundwater, and air, and the relationship between today’s contamination and historical waste practices and standard of knowledge. In addition, Dr. Saba’s expertise includes conducting detailed technical reviews of expert reports. Dr. Saba earned a Ph.D. from the University of Colorado at Boulder and worked on groundwater remediation technology development as a subcontractor for the U.S. Environmental Protection Agency before starting his consulting practice.” (emphasis added)

In his testimony, Saba explains that he studied throughout his collegiate experience how contaminants move through different formations and designed computer programs to map such movement. When he worked for the U.S. Environmental Protection Agency (EPA), U.S. Air Force, and National Academy of Sciences, he helped with research on using tracers to be able to “see” how contaminants move underground. He also spent time studying at the Colorado School of Mines where he focused specifically on petroleum contaminants. And all of that occurred before he began his 15 years of consulting experience involving real-world contamination issues.

In other words, Saba has nearly two decades of experience analyzing alleged and actual contamination, including how it relates to hydraulic fracturing. He has an extensive knowledge of hydrology and the chemical forensics and fingerprinting necessary to identify the isotopic signatures of methane. You know, all that hands-on experience Tony Ingraffea admitted earlier this week he didn’t have to be able to analyze the alleged contamination.

Isotopic fingerprinting has been an important tool in the process of identifying where methane originates, not only in Pennsylvania waters but across the country. In his testimony, Saba gave examples of how exact this science can be:

“A. Sure. So I’ll give you an example. Let’s say a company X. has right to gas in different geologic formations. Then company Y. would come and they would start extracting gas. Now company X. wants to make sure that the gas being extracted by company one is not their gas. So this is where I come in. So I would collect samples from company Y.’s gas and I collect samples from the different gas from different formation that’s belong to company X. and so now I have company Y. gas and company — geologic formation gasses and I do some sort of fingerprinting analysis on it, like I said the D.N.A. A. type analysis on the gas from which I can tell and able to tell whether or not company Y. is extracting gas that belongs to company X. or maybe 50 percent of the gas belongs to company X. or if they are exacting gas has nothing to do with company X. I did this set of projects in different states throughout the country actually, Kansas, Wyoming, Louisiana, Pennsylvania, New York. That’s all I remember right now.” (emphasis added)

He went on to explain how chemical fingerprinting and forensics works:

“…Once you look at the fingerprints, you know, enough, you know, you can tell this is tar, this is creosote this is diesel, this is gasoline. So you collect the sample from your ground. Then you collect samples from different sources. You do the same thing. You compare and you figure out where it came from. You can actually not even do that. You can actually tell when the contamination start, did this contamination in it this spot happen last year or ten years ago or 50 years ago.” (emphasis added)

“…From that, you can back calculate what was the position rate and now I can’t I can tell you of each of the slicings in the setting. I have contamination that can belong to the 1970. Now I can tell you contamination in that spot in that depth happened in 1970. That’s chemical fingerprinting. That’s not forensics. Forensics is you want to know where it came from. And I would have different entities working along a river for example, and I know that there was a spill that happened in 1970 from entity X. with chemical fingerprint like – looked like my chemical fingerprint I am looking for a source for, that’s information gathering, what happened from these different entries, how they operated, spilling records. You compare that to this and you have a complete picture. I know when it happened and where it came from. That’s environmental forensics as a whole.” (emphasis added)

Given all of that background, experience and knowledge, Saba was asked to “conduct an investigation to see whether or not the plaintiffs water wells contained contamination are contaminated and if necessity, what is the source of contamination in these water wells.” As mentioned above, he was able to determine “to a reasonable degree of scientific clarity” that the “plaintiff’s wells contain naturally—naturally containing compounds” and that the issues in the wells “are not impacted by gas well operations.”

Saba then goes on to explain how he was scientifically able to come to those conclusions, without actually visiting the plaintiffs’ properties:

A. Well, the first thing is I want to know what’s — what’s the area — the condition of the area, what’s — where are the water wells compared to the pad, how is this area being used. What’s the topography. And then another element is to this characterizing all sources I want to understand what is the background ground water condition, natural not touched, what did the ground water look like. The third is I wanted to characterize all potential sources like I said I wanted to understand all the compounds that are used, were used on the Gesford pad, what are these compounds, do do they look like, what their concentrations are. So now I have all my potential sources captured. So that’s the favorite step of characterizing all sources.”

Saba goes on to also explain how one of the plaintiff’s wells is at a depth of 300 feet that is drilled into the Catskill Formation, and the other plaintiff’s well has been confirmed to have gone dry—or ran out of water—which is important for understanding the flow of water through the formation. The well that is drilled into the Catskill Formation brings up another important piece of testimony that has to do with the constituents found in the Catskill having the potential to discolor water:

would notice is that you notice the — these stains, these natural stains on the rock. They have red color or rust color to it. That is a characteristic of iron. You know when you

put iron in air it rusts, give you this rust color. That’s what you are looking at so you know that this bedrock – this Catskill formation at least this picture has — is rich in iron and actually manganese. Manganese is when it gets oxidized it has this black color. So rust color and black color. And the Catskill formation was described to have iron and manganese staining on it. What that tells me I start to put the picture together here is that if there was a well installed in this piece of rock in front of us I would expect that the water that will come out if water comes out at all will have — will be rich in iron and manganese.”

A site inspection conducted in 2010 also corroborated that the property does indeed have outcroppings of the Catskill that have similar stains to the description above that when tested held iron and manganese. So to recap, a jug of brown, rusty looking water that was sampled from a well that is drilled into the Catskill Formation could realistically be the result of iron and manganese naturally occurring in that formation, as Saba explains: 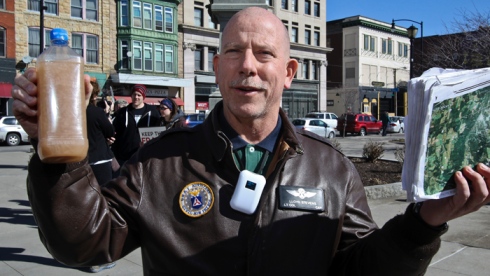 The jug of brown, rusty water held here by anti-fracking activist Craig Stevens, is allegedly a recent sample from one plaintiff’s well. While the jug was not permitted in court, the media has been more than willing to show pictures of it. SOURCE: Scranton Times-Tribune

The rest of the hearing was similar with Saba explaining how because a well that should have been able to be re-stocked by a nearby pond on the property went dry (in addition to the 600 foot depth of that well) that shows how tight the formation is. It’s not highly fractured as previous testimony suggested. Saba also described historic documentation he was able to find on the region, similar to that described in EID’s post earlier this week, that reported gas dating back to the 1800s. This is important because,

And so it went with example after example of anecdotal stories, newspaper articles, and sworn testimony from residents of the region on the quality of the water—even lighting water wells on fire. He even examined the recent Appalachian Basin study that looked at over 21,000 pre-drill samples of water in Pennsylvania to help him establish background on the water quality in the area.

He also talked about the isotopic fingerprinting he conducted on the Cabot wells and his review of all of the water samples including those taken by the plaintiffs’ witnesses, Pa. Department of Environmental Protection, the EPA, and Cabot. After all that Saba once again repeated:

“A. Like I said I think the very beginning is that what I found and I hope I get the chance to show you some results, what I found is that the water contains naturally occurring compounds consistent with the background. I have some actual numbers. I looked and confirmed that. It was natural occurring background compounds that was in the water.”

At the end of the day, Cabot asked for a dismissal of the case due to a lack of evidence. At this point, Saba’s conclusions are similar to what EID has been saying for years about Dimock and anti-fracking activists have conveniently ignored – the methane in water wells in Dimock is likely naturally occurring.