Environmental activists have been struggling to keep the #ExxonKnew campaign alive, as a steady stream of disclosures over the past several months has undermined their efforts to convince more government officials to launch climate-related investigations. Now, with the nomination hearing of former Exxon President and CEO Rex Tillerson scheduled for Wednesday, they’re going right back to one of their staples: generating fake news.

Case in point: the story that appeared this week in USA Today declaring that ExxonMobil previously did all sorts of business in Iran. The piece was pitched to USA Today (only after literally every other reporter in New York and Washington passed on it) by a group called American Bridge, which is aligned with anti-energy activists.

But if your only source of information on the issue was what you read in the paper you picked up outside your hotel-room door, you wouldn’t know (for instance) that the company has no operations in Iran, or that once Exxon actually explained in detail all of this to the SEC when the agency asked about it back in the mid-2000s, the matter was essentially closed, with the SEC taking no further action (you can read the correspondence between Exxon and the SEC yourself online, here, here, here and here). Just another example of activists pushing #fakenews.

That’s just the beginning, though. The USA Today story comes after InsideClimate News (ICN), the Rockefeller-funded organization that produced the original #fakenews about Exxon, wrote a story last week under the headline: “Federal Climate Investigation of Exxon Likely to Fizzle Under Trump,” which was about President-elect Trump’s nominee to be the next U.S. Attorney General.

“If he is confirmed by the Senate to replace Lynch, Sessions will become the nation’s top law enforcement officer and would hold ultimate authority on the future of any federal investigations of Exxon, making it highly unlikely that any investigation underway would proceed any further.”

The only problem? There never was an investigation from the U.S. Attorney General’s office, and for good reason.

After California Reps. Ted Lieu (D) and Mark DeSaulnier (D) asked Attorney General Loretta Lynch to open an investigation of ExxonMobil, the Department of Justice punted the request to the FBI in March 2016 to determine if there was enough to even warrant an investigation. There has been no movement on that ever since.

As EID has noted before, emails obtained through the Freedom of Information Act (FOIA) have shown that diverse voices have cautioned #ExxonKnew activists on multiple occasions that a federal investigation simply wasn’t going to work out.

That’s not all. Last month, the Los Angeles Times – which printed several of the original #ExxonKnew stories without disclosing that the Rockefellers had paid for them – ran an editorial calling on California’s next attorney general to “put the Exxon Mobil case high on his list.” The editorial claimed “California has its own inquiry underway,” just before admitting that the state’s attorney general, Kamala Harris, has refused to confirm that such an inquiry even exists.

Think about that. One of America’s largest newspapers used the attorney general’s refusal to comment on an investigation as proof that such an investigation is taking place, and that the next AG should keep that “case” alive.

One would think a legitimate newspaper would try to uncover the truth about the attorney general’s activities on this front, especially since groups like InsideClimate News have used California’s yet-to-be-confirmed investigation as part of its application for a Pulitzer Prize. Instead, the Times appears happy to let unsubstantiated claims about government activities not only remain unchallenged, but also serve as the basis for their editorials.

Considering all this, it’s no wonder that the #ExxonKnew campaign’s #DayAgainstDenial protests across the country had embarrassingly low attendances, and were virtually ignored.  Just to provide a few examples, activists in Denver only managed to get a couple dozen protesters to their rally in front of Senator Bennet’s (D-CO) office, which even featured an original musical performance: 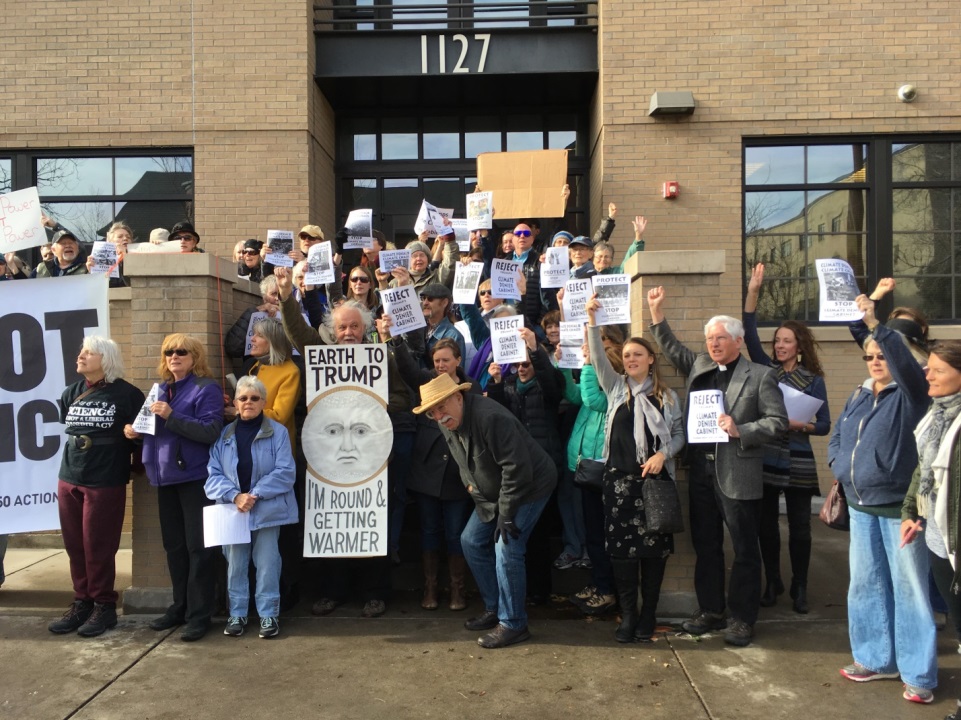 In Los Angeles, there wasn’t much action at Senator Kamala Harris’ (D-CA) office, with about a couple dozen protesters gathered there as well: 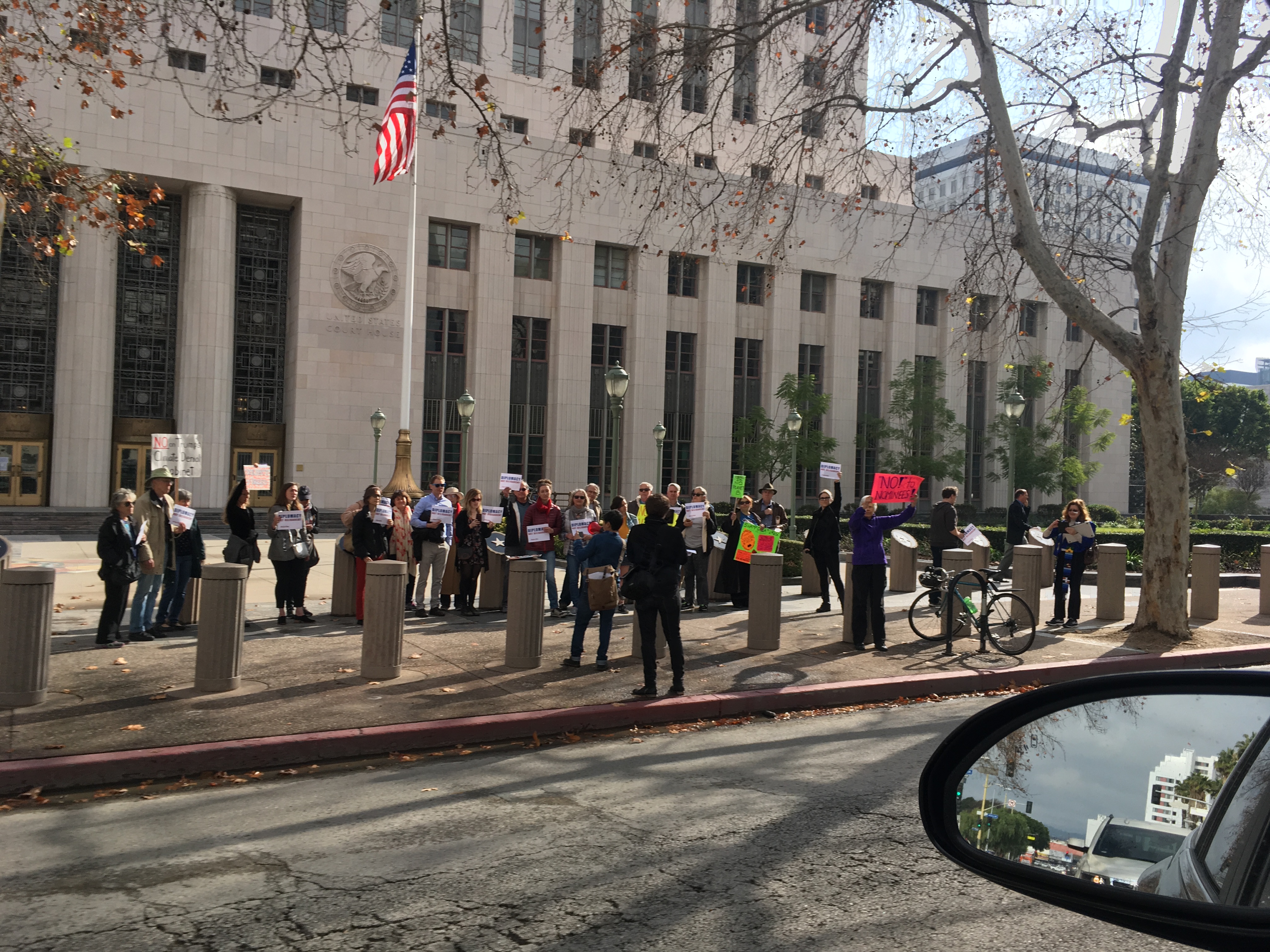 In Houston, only a handful of activists gathered outside Senator Cruz’s (R-TX) office: 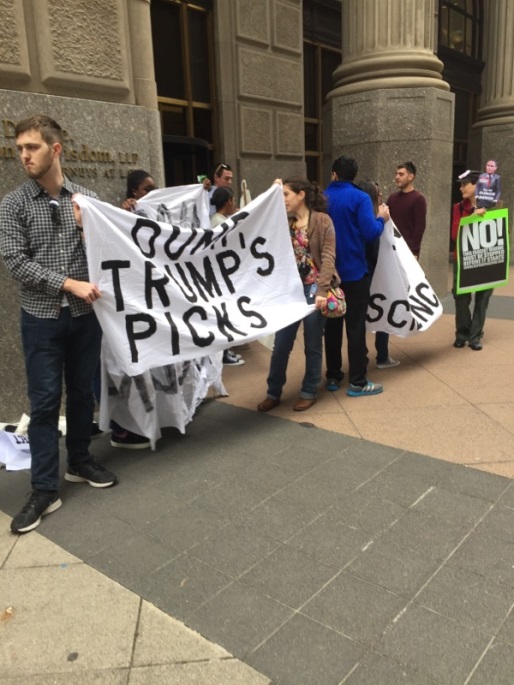 Of course, these events were billed as protests against “Trump’s climate denial cabinet, including Rex Tillerson” – except that just about every news media outlet has reported that Tillerson, and ExxonMobil, believe climate change is a serious issue. Tillerson and Exxon also support the Paris agreement and a carbon tax.

“I certainly have some significant disagreements with Mr. Tillerson’s recent corporate record, from the appropriate response to Russian aggression on the world stage to the importance of investment in cleaner forms of energy,” Udall said. “However, I appreciated the time and attention he devoted to answering my questions. In particular, I was pleased to learn more about his position on climate change policy. I’m encouraged that, contrary to the extreme statements by President-elect Trump, Mr. Tillerson believes in science and sees value in the United States remaining as a party to the Paris Agreement. I also appreciate that, in the past, he has advocated for solutions to reduce carbon emissions rather than denying the existence of climate change.” (emphasis added)

“I think Democrats are sitting down with him and realizing that this guy is a scientist, an engineer that believes in science, and so on some of the issues that you know they care about, I think the answers they’re getting are much different than they thought,” Corker said. (emphasis added)

Even Steve Coll of the Columbia School of Journalism, which manufactured the original #ExxonKnew narrative, has noted that Tillerson was responsible for moving Exxon forward on climate issues. As Coll said in an NPR interview,

“[Tilllerson] started talking about climate in a different way. Yes, the risks are there. They’re serious. We should take them seriously.”

It is worth emphasizing, of course, that the basis for the #ExxonKnew campaign was itself essentially fake news. The original “investigative reports” used cherry-picked factoids, while ignoring facts and important context, to produce a completely distorted view of ExxonMobil’s work on climate change.

What this all reveals is that the #ExxonKnew effort has devolved into the inevitable fringe environmental campaign. If it had not, activists wouldn’t need to levy false accusations about top Exxon officials and their views on climate change, and they certainly wouldn’t need to leverage government investigations that aren’t actually occurring.

Indeed, it appears that #ExxonKnew has simply become #FakeNews.