Faced With Failure, Anti-Fracking Activists Bring Their Extreme Rhetoric Back to Boulder, Colo.

After facing statewide defeat last year, the usual “ban fracking” suspects have had to retreat all the way to Boulder, Colo., where they demanded a ban on oil and natural gas development at a county commissioners’ hearing on Tuesday, recycled the same flawed talking points they have used exhaustively in the past, upped the extreme rhetoric and antics – and still face an uphill battle to ban oil and natural gas development even in a place characterized as “[u]ndoubtedly … the bluest of the blue in Colorado.” 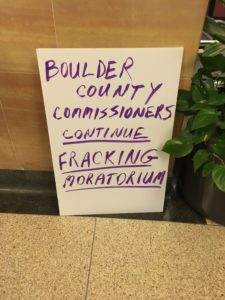 A sign left outside the Boulder County Commissioners’ hearing on oil and natural gas regulations on Tuesday. (Photo credit: Energy In Depth)

Perhaps recognizing the uphill battle they face to ban fracking in Boulder, “ban fracking” activists are now moving to peddle a so-called “climate bill of rights,” which was considered, discussed, and stripped down at a city council meeting in Lafayette last week.

Just how extreme were the “ban fracking” campaigners in Boulder? Not only did they brand the oil and natural gas industry as “agents of death,” “the devil,” and “an obsolescent industry … that should be euthanized,” but they also turned a hearing about oil and natural gas regulations into what local elected officials had hoped and preferred to avoid: “a renewed call for an indefinite extension of a series of moratoria on oil and gas or an outright ban on development.” Well, the county commissioners got what they didn’t want and more, as the Daily Camera reported:

“At least one conversation overheard in the chambers involved jamming up Boulder County courts and the jail with hundreds of arrested protesters. …

“Boulder County resident Rod Brueske called for a moment of silence for the future environmental protesters who ‘are going to be oppressed by the corporate government and militarized police force’ before going on to say he and his family are willing to face multiple arrests to keep out fracking.

This type of rhetoric made a mockery of the “collaborative conversation” and “balanced approach” on oil and natural gas development urged by Colo. Gov. John Hickenlooper (D) and Denver Mayor Michael Hancock (D) last week. 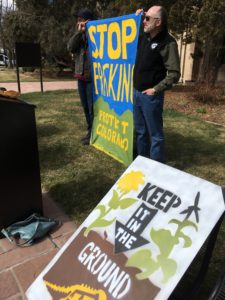 Even in Boulder – ranked fourth in the country in Livability’s list of “Best Cities for Liberals” – local “ban fracking” activists still had to rely on the help of national “keep it in the ground” groups, which seek to ban the production of oil, natural gas, and coal – the energy sources that provide 81 percent of the country’s power.

Micah Parkin, executive director of 350 Colorado, compared oil and natural gas regulations to “many other oppressive policies, such as slavery, and women and people of color not having the right to vote” — once again:

“Despite the [Colorado] Supreme Court’s ruling that local governments cannot place extended moratoria or bans on fracking, many Boulder County residents who voted for a local moratoria [sic] have not had their day in court to defend our right to initiative. We must remember that many other oppressive policies, such as slavery, and women and people of color not having the right to vote, have at times in history been the rule of law, and it’s our duty to stand up against unfair and unsafe laws in court and through direct action as necessary.”

After admitting that her group has “been working at the local level” to “pass bans and moratoriums on fracking across the state” to “ban fracking everywhere,” Washington, D.C.-based Food & Water Watch (F&WW) representative Lauren Petrie had to lean on New York’s fracking ban to make her case for banning fracking in Boulder:

“New York State’s health compendium is full of wonderful research by renowned scientists showing that fracking could not be done in New York because they didn’t have [sic] without impact; they didn’t have enough data to conclusively say this could be done safely, therefore they couldn’t impart regulations.”

Not only is the health compendium in question full of literature that has either been discredited or shown to have exceedingly faulty methodologies, but it also carried the disclaimer that “there are significant uncertainties about the kinds of adverse health outcomes that may be associated with HVHF [high volume hydraulic fracturing].” Read Energy In Depth’s analysis of the health compendium here, its whitepaper on the role of anti-fracking groups in financing and producing the science in the compendium here, and its testimony before the U.S. House Science Committee on the anti-fracking echo chamber here.

Petrie also cited a recent study that attempted to link oil and natural gas development to adverse health impacts – a study that was immediately disavowed by state health officials upon its release:

“A new study was just published in February 2017 by researchers at the Colorado School of Public Health at CU Anschutz, and they found that Colorado children and young adults with acute lymphocytic leukemia are [4.3] times more likely to live in areas of high density oil and gas development.”

Upon the publication of this study, Dr. Larry Wolk, Chief Medical Officer and Executive Director of the Colorado Department of Public Health and Environment (CDPHE), issued a statement calling it “misleading” and listing the “many limitations” that contributed to the “lack of a conclusive association.” Read Energy In Depth’s analysis of the study here, and its coverage of a new CDPHE report that found “the risk of harmful health effects is low” for residents living near oil and natural gas operations here. 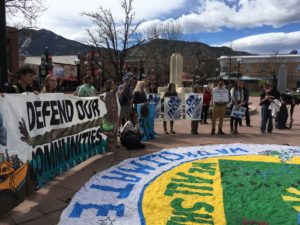 Other activists who lobbied the Boulder County Commissioners included Lauren Swain of 350.org, who just lobbied the city council of neighboring Broomfield two weeks ago; Josh Joswick of Earthworks, who has called the campaign against the oil and natural gas industry a “street fight,” “bar right,” and a “back-alley fight”; Karen Dike, who led F&WW’s “Coloradans Against Fracking” campaign; Tricia Olson, who headed the now-defunct “Coloradans Resisting Extreme Energy Development”; and representatives of East Boulder County United, a F&WW-funded group that once seized upon a tragic 500-year flood in northern Colorado to push its anti-oil and natural gas political agenda.

After failing to win statewide support in 2012, 2014, and again in 2016 – even with the support and resources of national “keep it in the ground” groups – “ban fracking” activists have had to resort to bringing their road show to Boulder, Colo., where they faced arguably the friendliest and most sympathetic crowd they can find in the state and still needed to rely on extreme rhetoric and antics to push their agenda. But when their campaign has been repeatedly rejected and sharply criticized by elected officials on both sides of the aisle, business leaders, and editorial boards across the state, it is no wonder that theatrical melodrama is all that “ban fracking” activists have left in their toolbox – even in one of the most liberal pockets of the West.