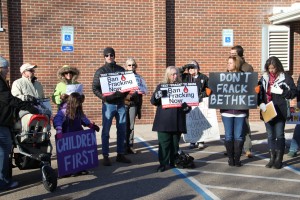 This is how the “ban fracking” rally outside the Colorado oil and gas task force meeting in Greeley looked without high-school students, who were given signs by the activists to make the protest look bigger. Photo: Energy in Depth

Anti-fracking turnout at this week’s Colorado oil and gas task force meeting in Greeley was so low that activists roped high-school students into waving signs at their protest. The desperate move, which is reportedly under investigation by school officials, stood in stark contrast to yet another strongly attended task force meeting by pro-energy citizens, oil and gas workers, business leaders and local elected officials.

Energy In Depth observed the students, who were brought to the task force meeting in a public school bus, holding “Ban Fracking Now” signs at rally with Food & Water Watch and Clean Water Action. According to the conservative political website Colorado Peak Politics, Greeley-Evans School District 6 is now trying to work out how that happened. 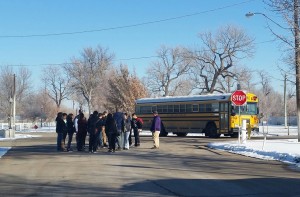 In a statement, the school district told Peak Politics the students are “learning about writing position papers” and were attending the task force meeting to speak to “pro and con” voices in Colorado’s energy debate. The statement continued:

“It was not the intent of this exercise that the students would actually take part in the protest. We are still trying to find out why the students were pictured holding the actual protest signs…

We do not in any way condone the use of district resources for students to participate in any kind of political or social protests during school time.”

Meanwhile, oil and gas supporters showed up in full force at the Colorado Oil and Gas Association rally held close by to the task force meeting. During the rally, local elected officials and business leaders testified to the benefits that the oil and gas industry brings to their communities.

Oil and gas supporters cheer on the industry. Photo: Energy in Depth

Bonnie Dunston, Mayor of Platteville described how Platteville has benefited from the oil and gas industry, including the $111,833 in severance taxes it collected in 2014 that has since been used to fund infrastructure and grants – “and it’s all because of the oil industry.” She continued:

“Oil and gas has always been good for Platteville, and hopefully we plan on keeping it around for a long time.”

Weld County Commissioner Chair Barbara Kirkmeyer explained how oil and gas has been a “proven pillar” to Weld County’s – and Colorado’s – economy:

“It has led us out of this recession that we have been in since 2007. That’s oil and gas that has done that. It has provided $29.6 billion to the state economy, $1.6 billion in public tax revenue, 120,000 jobs. Our economy is about oil and gas. It provides $682 million a year to Colorado school districts, to our fire districts, to our emergency response, to our water districts, our sanitation districts, the list goes on. And it’s done that without raising a single tax on Colorado families. Oil and gas fuels our Colorado’s real estate economy, our manufacturing economy, our home builders’ economy, and in Weld County, it helps fuel our agricultural economy.

We are the number one energy-producing county in the state of Colorado, and we are proud of that.”

Don Shawcroft, President of the Colorado Farm Bureau talked about the complementary relationship between agriculture and the oil and gas industry:

“Weld County is number one in the state for agriculture and number eight in the nation. This is not in spite of oil and gas but in part because of it.”

Eric Berglund, President and CEO of Upstate Colorado Economic Development, spoke to the task force during a session featuring perspectives from Greeley. “You’re sitting in the center of Colorado’s economic growth,” he said, welcoming the audience to Greeley. He explained:

He described how Weld County has successfully worked with agriculture, industry, and oil and gas:

“In Weld, we’re a right-to-farm county. Why do I say that, it’s because ag comes first. I note this because we’ve figured out how to address industry and the urban fabric coming into contact with one another. It started with agriculture, it went to industry, and now it’s working with oil and gas.”

“In Weld County, we are energy proud” was a theme he continually returned to throughout his remarks:

“We are happy with the responsible development of the energy industry. You know, we hear a lot in the media and other places that you’re either pro-family or you’re pro-industry. I’m here to tell you that you can be both. It is not either-or. I know there’s a lot of families sitting behind me that have potentially doubled or tripled their income, have benefits, have a stable job, are excited that their school district is upgraded, that their fire district is upgraded, and they’ve taken advantage of the billions of dollars of new revenue that’s come into local jurisdictions because of oil and gas drilling.

If you have conversations with the industry, they listen and they do pay attention. I have never met a stronger environmentalist than an oil and gas employee. They hunt, they fish, they breathe the same air we’re breathing, they drink the same water we’re drinking. They want to make sure they do it right, and they are.”

Later, during the public comment period of the task force meeting, Richard Harris, representing Aims Community College, spoke about the contributions the oil and gas industry has made to improving the quality of education Aims’ students receive:

“Aims Community College is pleased to testify in support of the strong partnership with the oil and gas industry. They’ve provided safety considerations for our personnel and students, along with the environment. Further, they’ve supplied beneficial commitment, financial resources needed by our students, as well as critical workforce opportunities. And I just hope that we can provide outstanding learning opportunities so people are critical thinkers and can plan well and come to good solutions.”

“What our oil and gas opportunities here in Weld County allow is the family farm to stay in the family.”

It seems that oil and gas has become agriculture’s best friend over the last 20 or 30 years here in Weld County. We have ups and downs all the time in agriculture. There’s nothing more helpful than being able to go to that mailbox and getting a royalty check. And that helps keep more people in agriculture, and more people healthy economically, than crops, frankly, and livestock prices.

An oil and gas professional spoke about his experience working in the industry:

“My role for my company allows me to work and interact with a wide variety of professionals in the oil and gas industry, from the executive level to the person who’s just starting out in the industry as a laborer on a construction site. The common thread I have seen from white collar to blue collar, are individuals who care and take very seriously their roles and responsibilities.

The other two things to add to that are safety and education.

Safety, we’ve heard a lot tonight about from public comment on the road traffic. With what we build in our gathering system, we’ve eliminated over 50,000 truck roads in 2013, that we didn’t drive on the roads in Weld County, and that’s a great thing.

Education-wise, two reasons why my family and I moved here. One is the opportunity and privilege I have to work in oil and gas, and the other is the chance to raise my family here in the great state of Colorado. That’s a huge thing for me and my family, and to have these benefits. As a direct employee that works in the industry, [there are] benefits that I see that families and communities get from the great companies that are here. And I’m grateful for those opportunities, and I’m grateful for the opportunity that it is to live in the great state of Colorado. I love the outdoors, and I love being a part of bettering the environment.

The opportunity we have here in Colorado, to be part of energy independence not only for Colorado but for the country, is a great benefit.”

Jeff Wasden, of South Metro Denver Chamber, appealed to task force members to focus on facts – and the economic benefits the oil and gas industry is bringing to families and local communities:

“I encourage you to sift through the facts, the hyperbole, the knee-jerk reactions. It’s an emotional issue. We understand that. But please allow the facts and the data of what this issue is and how important this is to the Colorado economy, to working families, what this has meant to Weld County, to the schools, to the roads, to the families. This is an important economic driver, an engine, for working families in this state, and it is important that we recognize that.”