A federal judge on Friday threw out a $4.2 million nuisance verdict against Cabot Oil and Gas, confirming what had long been apparent regarding last year’s highly-publicized Dimock case: that there were “substantial and varied weaknesses” and “serious and troubling irregularities in testimony” by the plaintiffs.

That coupled with what U.S. Magistrate Judge Martin C. Carlson called the “myriad examples of inappropriate conduct” by the plaintiffs in front of the jury, and the fact there was no way that “jury’s damages award could withstand even passing scrutiny,” led Carlson to rule that “a new trial is not only justified, but required.”

In other words — we’ll be headed back to Dimock again to hear evidence that points to the problems with the plaintiffs’ wells likely being naturally occurring, especially since they began before the nearby gas wells were ever drilled and could have been fixed with treatment options that the plaintiffs’ refused to take. 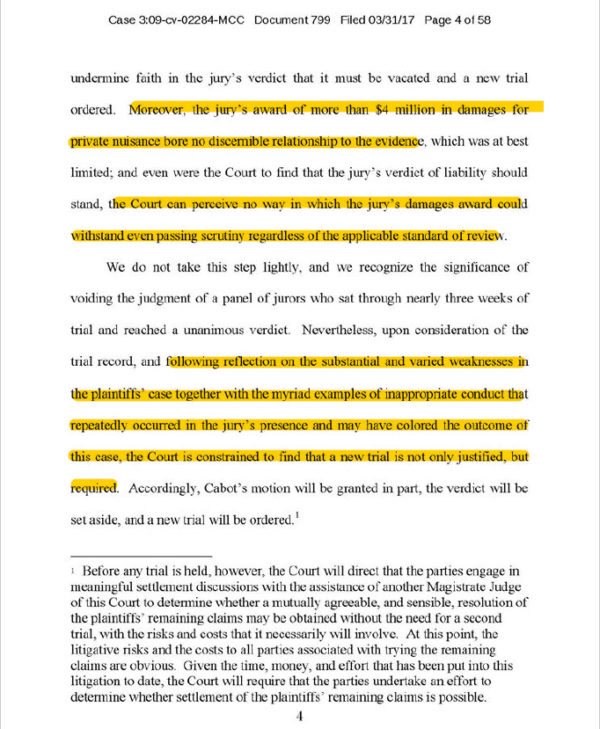 This is now the second time that one of the key scenes from the Gasland films — which threw Dimock into the spotlight under false claims of contamination from fracking — hasn’t held up to court scrutiny.

The first occurred in Parker County, Texas where a district judge ruled that in early 2012 a consultant named Alisa Rich had convinced the property owner to hook a garden hose up to a gas vent – not the water line – “to provide local and national news media a deceptive video, calculated to alarm the public into believing the water was burning.” The judge also noted: “This demonstration was not done for scientific study.” Rich had advised the property owner to do this because “it is worth every penny if we can get jurisdiction to EPA.” Multiple studies, including a University of Texas at Austin study released earlier this month, have further debunked Parker County water contamination claims.

As was the case in Parker County, the Dimock plaintiffs used scare tactics and misinformation to entice the media and activists to their cause such as carrying around jugs of filthy looking water, claiming decreases in property values even though their values actually increased, and blaming fracking for their water troubles despite the problems starting months prior to the gas wells being drilled — let alone fracked.

EID noted when the shocking $4.2 million verdict was awarded a little more than a year ago that the jury’s flawed decision was not based on the facts. Fortunately Judge Carlson recognized that on Friday.