The Environmental Defense Fund (EDF) recently released a new study in which researchers flew a helicopter over 8,000 well pads in seven top U.S. oil and gas basins, specifically targeting what the organization calls “super-emitters” of methane. EDF’s press release claims that methane emissions were “widespread, pouring out from these super emitter sites in every basin.” But when you actually dig into the study, the researchers note, “the percentage of total well pads with detected HC emissions was 4%” (p. 6).

In other words, with so-called “super-emitters” being the exception rather than the rule (only 4 percent of thousands of well pads), it’s not exactly accurate to call them “widespread” or suggest that natural gas production poses some kind of large risk to the climate.  On the contrary, natural gas production is the reason U.S. greenhouse gas emissions have plummeted in recent years.

Here are a few facts to keep in mind:

Scientists, and indeed EDF itself, have long noted that natural gas maintains climate benefits as long as the “leakage rate” is below 3.2 percent. This latest EDF study mentions the findings of a 2013 study done in conjunction with researchers at the University of Texas, which found a “leakage rate” far below that threshold, at 1.5 percent:

Interestingly, when that study came out in 2013, EDF had this to say about it,

“‘This is good news in that it shows emissions can be controlled,’ says Eric Pooley, senior vice president of the Environmental Defense Fund, a research and advocacy group that teamed up scientists, two environmental testing firms and nine natural gas companies to produce the peer-reviewed study, published in the Proceedings of the National Academy of Sciences. The gas companies involved provided the majority of the funding.

‘Industry can get it right,’ says Pooley, saying companies are being prodded to reduce emissions by an upcoming EPA rule — effective January 2015 — that all methane be captured when liquids are being removed after drilling.”

The Associated Press put out a headline explaining, “Methane leaks from gas drilling not huge” with the lede of the story reading, “Drilling and fracking for natural gas don’t seem to spew immense amounts of the greenhouse gas methane into the air, as has been feared, a new study says. The findings bolster a big selling point for natural gas.” Most headlines followed suit, such as “Study: Natural gas industry can cut fracking emissions,” “Study: Methane leaks from natural gas wells declining” and “Fracking Fears Overblown.”

Fast forward to a few years and that data haven’t changed one bit. EDF’s numerous other reports, as well as reports from other respected institutions, have also found very low leakage rates (between 1.2 and 1.9 percent) but now the group is pushing claims that methane emissions are “higher than previously estimated” and that they are a “a big problem.”

But what’s important here is not whether one emissions estimate is higher than another. What’s important is the actual methane leakage rate, which is what determines whether natural gas is beneficial for the climate. The data clearly show that it is. As Alex Trembath of the environmental group, The Breakthrough Institute, rightly explained, data on methane emissions show “that methane leakage is a minor factor determining the benefit of a coal-to-gas transition and that methane leakage levels are well within acceptable ranges.”

In this study, like many of EDF’s previous reports, the researchers focused specifically on locating “super-emitters.” While this particular study was centered on capturing infrared images, other studies spearheaded by EDF have taken methane measurements from aircrafts.

In a recent EDF report that analyzed data from 12 previous EDF papers done on the Barnett Shale, the researchers were clear that their work was “biased toward high-emitters”:

“To obtain the relatively large sample of high-emitters in dataset 6, two teams drove around the Barnett region and estimated the emission rate of the source of each plume encountered. Because high emission sources produce plumes that remain above an instrument’s detection limit over longer distances than low-emission sources, this method tends to favor identifying high-emitters.”

Yet even after making a point of seeking out “higher” emitting sources, the researchers still found a very low leakage rate overall.  As the report finds,

As this chart below shows, recent peer-reviewed studies – many of them spearheaded by the Environmental Defense Fund (EDF) – find that methane “leaks” from natural gas development are well below the threshold at which scientists believe natural gas may lose its greenhouse gas advantage. 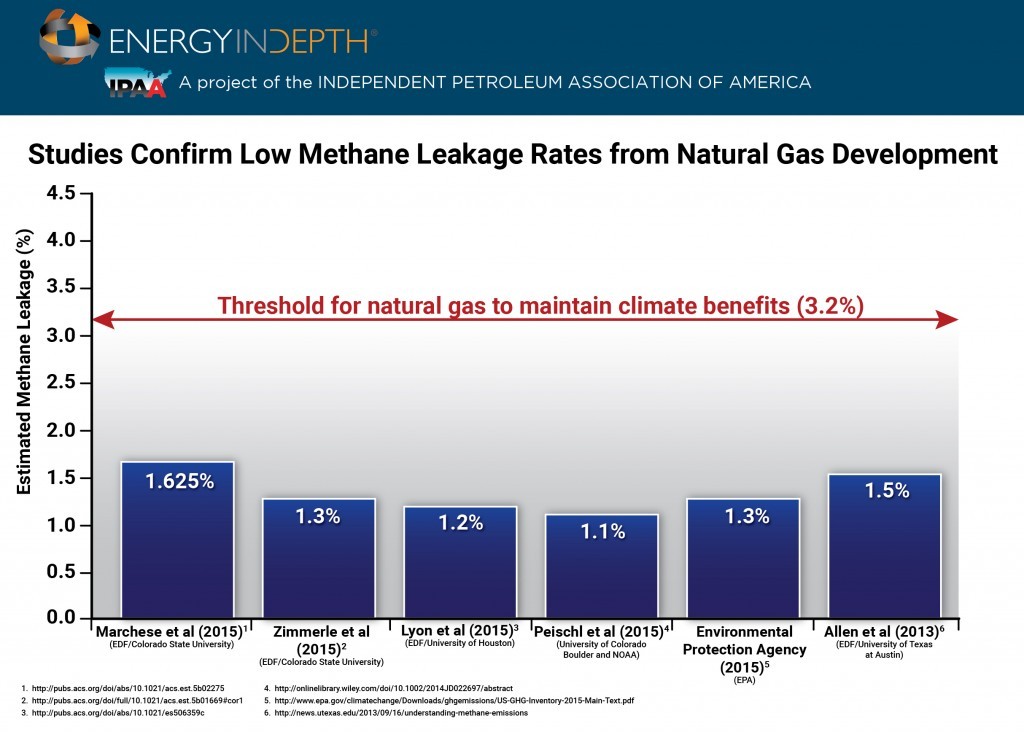 Fact #3: Studies have shown that oil and gas producers are not responsible for global spike in emissions. A recently released study by scientists at the National Oceanic and Atmospheric Administration (NOAA) and National Institute of Water and Atmospheric Research in New Zealand (NIWAR) has found that oil and natural gas producers are not to blame for a global increase in methane emissions.  As lead researcher Hinrich Schaefer said, “Currently increasing methane levels are caused not by fossil fuel production but rather by wetlands or, more likely, agriculture.”

Fact #4: EPA’s methane regulations would reduce global temperatures by four one-thousandths of one degree by 2100.  Energy In Depth has done the math and found that EPA’s methane regulations, which EDF has been pushing for in every study, will have virtually no impact on the climate. In fact, they will only achieve a reduction in global temperatures of 0.004 degrees Celsius, or four one-thousandths of one degree, by the year 2100.

Fact #5: Natural gas is not “a big problem” but a huge part of the climate solution. The U.N. Intergovernmental Panel on Climate Change (IPCC) said the “rapid deployment of hydraulic fracturing and horizontal-drilling technologies, which has increased and diversified the gas supply” is “an important reason for a reduction of GHG emissions in the United States.” According to the Energy Information Administration (EIA), since 2005, natural gas has prevented more than one billion metric tons of carbon dioxide from being emitted from power plants in the United States. Meanwhile, by comparison, the use of renewable energy has prevented only 600 million metric tons of carbon dioxide.  EIA also noted as natural gas fired electricity generation ramped up, power plant greenhouse gas emissions reached a 27-year low in April 2015. The Paris-based International Energy Agency’s (IEA) latest World Energy Outlook pointed out that natural gas is a “valuable component of a gradually decarbonizing electricity and energy system.”  Just a few weeks ago, IEA released data finding, “In the United States, emissions declined by 2% (in 2015), as a large switch from coal to natural gas use in electricity generation took place.”