A new air quality study from researchers with Physicians, Scientists and Engineers for Healthy Energy (PSEHE) and Stanford University is the latest attempt to use flawed research to support the national campaign to restrict consumer choice and ban natural gas appliances, this time incorporating inflated methane emissions and a dubious claim of health impacts from NO2 emissions to make its case.

This latest study attempts to measure methane released from gas cooking stoves in 53 California homes, with a focus on steady-state-off emissions. But it’s riddled with similar flaws as previous air quality studies from RMI and UCLA, rendering its headline-grabbing conclusions suspect at best.

Here are a few things to keep in mind about the study:

#1 The authors’ health claims are unsupported by their findings and methods.

In order to make the claim that gas stoves are harmful to health, the researchers compared NO2 emissions readings over the course of a few minutes to the NAAQS one-hour outdoor air quality standard.

In fact, the PSEHE study begins by explaining:

“Our data suggest that families who don’t use their range hoods or who have poor ventilation can surpass the 1-h national standard of NO2 (100 ppb) within a few minutes of stove usage, particularly in smaller kitchens.” (emphasis added)

It’s curious that the researchers did not acknowledge in that statement that the “1-h national standard” is an outdoor standard, and is also an average, although elsewhere in the press release they do get around to admitting that “there are no indoor standards.”

Those caveats are important, though. A report published last year found that a prior research team (from UCLA) making the same conclusion had erred in using a dubious technique to measure emissions, namely by comparing a peak reading in a small sample to an average outdoor standard:

“For comparison to NAAQs and CAAQs, the UCLA Report compared peak (maximum) concentrations directly to 1-hour NAAQs and CAAQs. The comparison of maximum peak concentrations to a 1-hour standard is not correct and certainly not relevant for assessing health risks. The 1-hour NAAQS and CAAQS represent health effects thresholds associated with 1-hour time averaged exposures. It is meaningless to compare a maximum to an average.” (emphasis added)”

Other studies on the same topic reach their conclusion by excluding ventilation. When ventilation is added to the mix, they are found to “drastically reduce concentrations of pollutants from cooking burners” by 55 percent.

The researchers’ methods included sealing the kitchens with plastic sheets to minimize ventilation.

No matter the kitchen or fuel choice, range hoods are needed in any scenario actually involving cooking. It’s telling that the PSEHE/Stanford experiment did not include emissions from the cooking process. Indoor air quality studies have consistently found that emissions from the cooking process—regardless of whether it’s electric or gas —represent the chief source of emissions. In the words of the leader of Lawrence Berkeley National Laboratory’s Indoor Environment Group, Brett Singer, PhD:

“Cooking food on either type of burner also produces fine particles and some organic chemicals, including acrolein and polynuclear aromatic hydrocarbons that are known to be hazardous. Frying, broiling and other cooking at high temperatures generally produces more pollutants.”

“However, these pollutants can be easily addressed with good kitchen ventilation, which is especially important if you live in a small home.” (emphasis added)

Essentially, the researchers’ argument that oven emissions could “produce enough NO2 to exceed the 1-h ambient standard (100 ppb) within a few minutes,” is an unsound assessment, and the claim of “health impacts from natural gas stoves” is unsupported by the findings and ignores the chief source of emissions during cooking.

#2 The researchers create an unrealistic kitchen environment to achieve their results.

The variability of the results is exacerbated by the design of the experiment. As noted above, the kitchens were sealed with plastic sheets, sandbags, and painter’s tape – which in no way represents the kind of kitchen in which people cook.

Sealing the room with plastic also meant sealing any ventilation to the exterior to prevent any cross contamination with outdoor air. And instead of using the “ductless” range hoods, researchers used indoor fans to circulate air at selective locations and speeds, as to not interfere with the burners. Vented hoods have a high degree of effectiveness when overhanging the stove, and their counterpart, the “ductless” range hoods, feature activated carbon filters to remove particulate matter and pollutants from recirculated air. Once again, the selective choice in air circulation is in –no way a realistic measure of the circumstances in a typical home.

And while the study wants to bring its findings to a national level, it can’t group different technologies in natural gas ranges together. Stoves with pilot lights were found to produce larger amounts of methane in the study because they require constant natural gas and there are delays in ignition between stead-off and steady-on states. Newer natural gas appliances don’t include the inefficient pilot light model, and pilot lights are uncommon after the U.S. Department of Energy’s “no standing pilot light” rule prohibited standing pilot lights in gas cooking products as of 2009.

#3 The researchers have made false claims about natural gas in homes.

Perhaps one of the most egregious issues with the study isn’t what’s in the study itself, but what the researchers are saying about it. The rounds they made with the media in announcing the study revealed some troubling views of how natural gas actually works in the home.

“The leaks were probably occurring on pipe fittings located in the kitchen itself and could be too small to perceive by smell, allowing them to drag on without being detected, since methane doesn’t give off a smell, Lebel and a co-author, Stanford professor Rob Jackson, told E&E News.” (emphasis added)

There is no other way to put it: what the researchers told the pressis false. Natural gas that enters transmission and distribution lines – the ones that go into your house – have to be odorized as a safety mechanism. It’s why even though methane may be odorless in its natural state, most people associate a rotten eggs smell with natural gas.

It’s concerning that researchers studying natural gas leaks in homes wouldn’t know that natural gas has a tell-tale odor by design – and if they are aware, would tell reporters otherwise.

Then again, equally alarming was one of the researcher’s statement that people should just fix their fittings on their own. As NPR reports:

“Replacing a gas stove with an electric one is not an option for people who can’t afford it, or for renters. But Jackson says there’s still something you can do and all it takes is a wrench. ‘Pull the stove out from the wall and tighten the connectors to the stove and to the nearby pipes,’ he says. That should reduce the leaks.” (emphasis added)

This is a dangerous statement to make. Residents should call a licensed professional if they have any reason to believe they may be experiencing leaks. Telling people to pull out their own stove to tinker with the connectors is a reckless statement to make, and frankly reflects once again a lack of understanding of how natural gas appliances function in the home.

#4 The study is affiliated with ‘Keep It In the Ground’ groups.

The study’s lead author, Eric Lebel, is a senior scientist at PSEHE, a group founded by self-proclaimed anti-fracking activist Tony Ingraffea, who has bragged his research is “a form of advocacy” that has “advocacy-laced words and phrases in our papers,” and still receives funding from the anti-fracking Park Foundation — an organization that funds a bulk of the anti-fracking activities across the country.

Further, the PSEHE’s Executive Director wrote a memo in 2012 laying out a strategy for making questionable health claims about fracking that seems to be repeating as “Keep It In the Ground” changes up its messaging to “electrify everything” and pushes research that is funded, analyzed and reported on in an echo chamber.

Notably, RMI’s Brady Seals was thanked “for insights and suggestions” in the study’s acknowledgements, yet is being reported as having “no involvement in the research.” Why is RMI being described as a disinterested observer, when that’s obviously not the case? 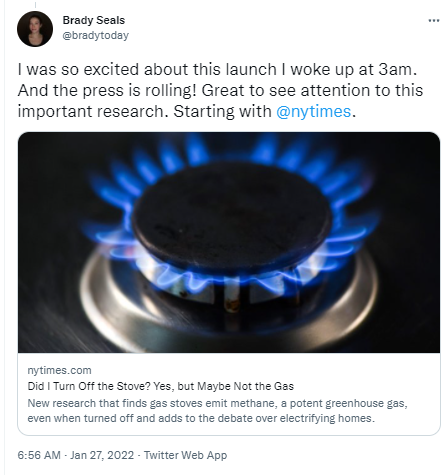 #5 The natural gas industry has actively invested in reducing emissions.

The issue of emissions is not one that the natural gas industry has been shirking. According to the American Gas Association, it has committed to investing nearly $30 billion each year to modernize the gas system and is investing $3.8 million every day to help customers and communities reduce their carbon footprint.

And the investments are working. Pipeline replacement projects have reduced emissions from the natural gas distribution system 69 percent since 1990 as pipes that may no longer be fit for service are being replaced with ones made from more modern materials, which increases safety and reduces emissions. Investments like these have helped natural gas utilities and their customers offset over 13.5 million metric tons of carbon dioxide emissions from 2012 to 2018—the equivalent to removing 2.9 million cars off the road for a year.

A singular focus on residential natural gas is misplaced if the goal is to address public health and climate.

While combustion emissions from gas ranges, ovens, and cooktops can contribute some emissions, there are no documented risks to respiratory health from natural gas stoves from the regulatory and advisory agencies and organizations responsible for protecting residential consumer health and safety. Federal agencies such as the Consumer Product Safety Commission (CPSC) and the Environmental Protection Agency (EPA) closely monitor and have evaluated homes with natural gas piping and natural gas appliances and have never taken action to limit their use on methane emissions as suggested in this study.

And shifting natural gas consumption upstream to sell as higher cost electricity is harmful to residents. Higher energy costs force homeowners to keep their homes at unsafe temperatures and greatly impact lower income residents who do not have sufficient income to meet their basic needs.

Pushing consumption upstream would only harm these residents and state climate goals. Approximately 40 percent of our nation’s electricity comes from natural gas, by far our greatest source and yet using natural gas to make electricity, rather than delivering directly to a home or business is significantly less efficient. Converting natural gas into electricity only maintains 36 percent of usable energy on the journey from production to customer. Homes that use natural gas for heating, cooking, and clothes drying have emissions 37 percent lower than homes sing electricity for those functions.