Florida Fracking Misinformation Campaign Kicks Off With Help From the Hulk

Florida state Sen. Dana Young and state Rep. Kathleen Peters recently filed companion bills (HB 237 and SB 462) intended to ban hydraulic fracturing, commonly known as “fracking,” in the Sunshine State. Not only would these ill-advised bills needlessly ban a routine practice used safely across the country for many decades, but they would  also be detrimental to the state’s existing conventional oil and gas industry.

The announcement of the bills was preceded by a call organized by the Floridians Against Fracking (FAF) coalition, which featured anti-fracking activist and actor Mark Ruffalo, most widely recognized for his role as the Incredible Hulk. As the Tallahassee Democrat reported ahead of the call, “Hulk smash fracking in Florida. Or at least Mark Ruffalo, the actor who plays him in the movies, wants to.” Never mind that fracking doesn’t actually occur in Florida. Then again, this “Keep It In the Ground” campaign is about a lot more than just banning fracking.

Ruffalo was an active participant in the fight to ban fracking in New York, and regularly uses his celebrity as a “megaphone” to spread misinformation and debunked research compiled by activist academics like Cornell University professor Tony Ingraffea, who has also been invited to speak to Floridians about a practice he has admitted having no expertise on.

Ruffalo made clear during the call that the goal of his movement is not to ban fracking; it is instead a concerted effort to stop all fossil fuel development, whether it be the “conventional” industry that has thrived in Florida for decades or the “unconventional” industry most active in America’s shale plays in other states.

As Ruffalo said on the call:

“We have solutions that are, um, to move away from this now that are economically viable. All the jobs, all the new wealth in [inaudible] will be created in replacing this archaic, 70-year old energy system that’s given us industrial tech – industrial revolution. It’s given us technological revolution. It’s brought us to the place where we are that we can leave it behind right now. I’m grateful for what it’s given us, but now it’s time to move on. And we are on the precipice of doing it and you guys are leading the charge right now on the front lines in Florida, and I’m so proud to be able to talk to you and share what wisdom and experience and faith that I have from this journey.” (emphasis added)

“They [Florida] also – you also have sunshine. You have the… you have the essentials to actually make this transition relatively quickly and relatively painlessly, actually, and to benefit quite a bit by it. Um, you guys are on the front line of the hurricanes. Hurricanes disrupt energy systems you know. When you move to, when you stop using fossil fuels and you start to envision or imagine a world without fossil fuels, and it’s easy to do now, we have the technology to do it. It’s just a matter of public learning, education and political will.” (emphasis added)

Mary Gutierrez, Executive Director of Florida’s Earth Ethics, an FAF member, responded to Ruffalo’s latter remarks — which specifically addressed a question she asked on what a Florida ban would mean for the rest of the country — by saying, “I agree. I agree. Thank you so much,” confirming FAF’s ultimate goal is to ban all fossil fuel development.

Yet, FAF members and the legislators pushing for these bans continue to try to convince the public such isn’t the case. In fact, Kim Ross, president of ReThink Energy Florida and an FAF steering committee member,  insisted during the call that the number one point they will have to dispute is that this ban will take away the right to drill — even though their definition of “fracking” includes things that aren’t fracking at all (such as acidizing which is used in municipal water supply wells and other commonly used well stimulation techniques) that would essentially make conventional development impossible should they be banned:

Florida Politics reported on Sen. Young’s announcement of her bill that,

“Their bills would prohibit all forms of ‘advanced well stimulation treatments,’ meaning no high-pressure injections aimed at cracking the bedrock in search of black gold. Acid fracking – similar to hydraulic fracturing, with chemicals subbed in for water pressure to break through the rocks – is also expressly banned in the bills.

“Non-fracking wells can carry on as usual, even if cleaning and maintenance requires operators to up the water pressure or use chemicals to restore ground permeability. So long as the pressure or pH doesn’t put a crack in the bedrock, it won’t be affected.”

But here’s the thing: Stopping well stimulation will absolutely impact the conventional industry. The proposed Florida ban would stop routine and essential well stimulation practices that have been safely used in Florida for decades. While hydraulic fracturing has not been used in Florida to stimulate or complete wells, acid stimulation is a regular part of Florida’s conventional well development process, as EID has previously explained in the following fact sheet: 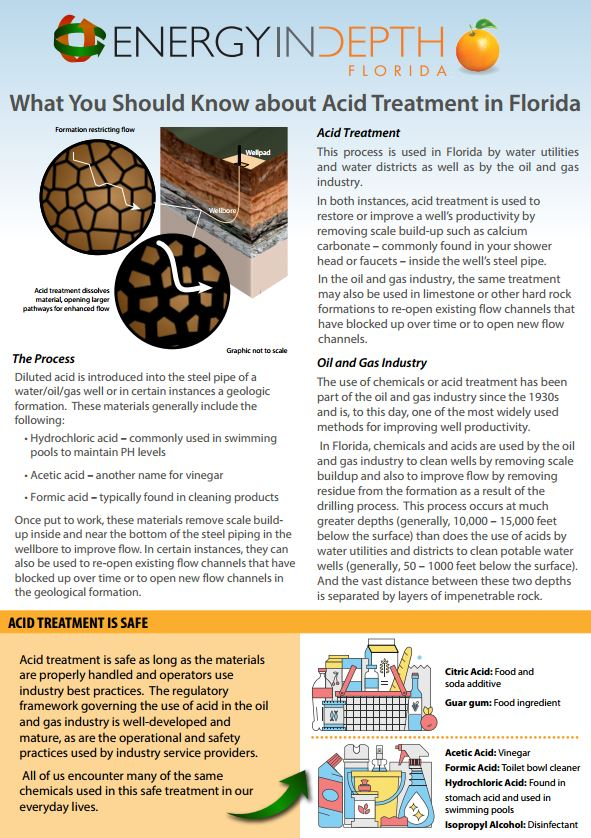 From the fact sheet:

“In the oil and gas industry, the same treatment may also be used in limestone or other hard rock formations to re-open existing flow channels that have blocked up over time or to open new flow channels.” (emphasis added)

In other words, the conventional oil and gas industry has a long history of safely using acid for routine maintenance and to improve the performance of the state’s producing wells.

The “Sunshine State” may indeed be exploring implementation of more renewable resources into its energy mix, but a large-scale renewable transition is not something that will occur overnight. After all, Florida is one of the five largest energy consuming states in the country. And considering Florida was the fifth largest consumer of natural gas in 2015, the proposed well stimulation ban will ensure that even more of Florida’s energy comes from other states where fracking is already used safely by hindering a conventional oil and gas industry that has a proven record of success and significant positive economic impact in the state.