Floridians Deserve to Have the Facts on Fracking

Florida’s oil and gas industry has operated safely —mostly unnoticed by residents and tourists—for decades. And while no hydraulic fracturing (“fracking”) is currently happening in the state, activists have jumped at the opportunity to push misinformation in an effort to prevent it from ever happening and, at the same time, to smear an important and established Florida industry.

Fracking is a routine well completion technique that has been used elsewhere in the United States more than 1.2 million times since the 1940s. Increased use of this process – which takes anywhere from a few hours to a few days in the often decades-long life of a well — has led in recent years to an economic renaissance in areas where shale production takes place. While shale production is not happening in Florida, anti-fracking activists have recently descended on the state to scare Floridians about potential impacts that the scientific community has said are implausible at best.

A recent ContextFlorida article examined both the exaggerated and inaccurate claims from anti-fracking activists and the ways in which they are undermining a rational cost-benefit analysis of fracking. Sarah Maricle Ayers, the author of the piece, notes that Florida is at a critical juncture with fracking, as the state’s legal framework for fracking operations is still taking shape, and risks and benefits need to be properly compared to determine the best course of action for the Sunshine State.

Ayers notes that the discussion has taken an unfortunate turn as groups like the Conservancy of Southwest Florida, the Sierra Club, and Earthjustice promote inflated fears of the ecological ramifications of fracking. To this effect, Ayers’ writes:

“Fracking foes are… a destructive force in shaping policy because they refuse to evaluate oil production in terms of risks versus rewards. Risks can never be completely eliminated in any human endeavor, and energy development is no exception. The right approach, however, will come from weighing the benefits against the costs. It is not reasonable to ask Floridians to forego decades of rich, life-improving benefits on the basis of fear stoking and flimsy science.” (emphasis added)

Energy In Depth has previously documented the fact that some of the most dishonest and extreme (not to mention deep-pocketed) national anti-fracking groups have targeted Floridians for their misinformation campaigns.

No one can know the extent to which shale development or fracking will be part of Florida’s future; however, using the experiences in other shale-producing regions as a guide, Ayers, in her article, pinpointed potential benefits the state could one day realize. For instance, Ayers’ points out that fracking, and the resulting oil and gas production, could significantly increase state government revenue. This has been the case in Ohio, Texas and North Dakota, each of which Ayers views as a model for Florida, stating:

“Florida could follow [Ohio’s and Texas’] models of modest tax rates, which, over the life of wells, would spell billions in additional state revenue. North Dakota fittingly illustrates this effect, when between 2008 and 2014 it experienced a 129 percent rise in tax receipts—dwarfing the revenues of other states in this time period—because of its oil advantage.” (Emphasis added)

Opening up Florida to fracking operations could also create a substantial number of high-paying jobs. To illustrate this point Ayers highlighted the findings of the Energy Information Administration, which stated that:

“[The] average wages of oil and natural gas production jobs were $108,000 in 2013, more than twice the average wage for all private sector industries.” (Emphasis added)

And a study conducted by the Manhattan Institute in 2014 found that:

“For every direct oil and gas job, there are, on average, three jobs created in industries such as housing, retail, education, health care, food services, manufacturing and construction.”

In Ohio, these new energy and supply chain jobs have spurred the growth of training and apprenticeship programs to prepare locals to take advantage of these opportunities. This ideal combination of training and demand has resulted in more than 190,153 people employed by Ohio’s oil and gas industry or related companies.

But really, one doesn’t have to look outside of Florida to see the impacts the industry could have on the economy of the state. According to a 2013 survey by the American Petroleum Institute, Florida’s oil and gas industry already contributes $23.2 billion to Florida’s economy (or 3.1 percent of the state’s total economy), supports 286,000 jobs across the state through at least 183 businesses located across almost all 27 congressional districts, and currently pays an average salary over $20,000 more than the average for any other industry in the state. According to the report,

“Thus, while the average annual salary in Florida across all industries and sectors is $42,896, the average oil and gas industry salary (excluding gas stations) is substantially higher—$64,463 annually.”

The following map illustrates where current businesses supported by Florida’s oil and gas industry are located. 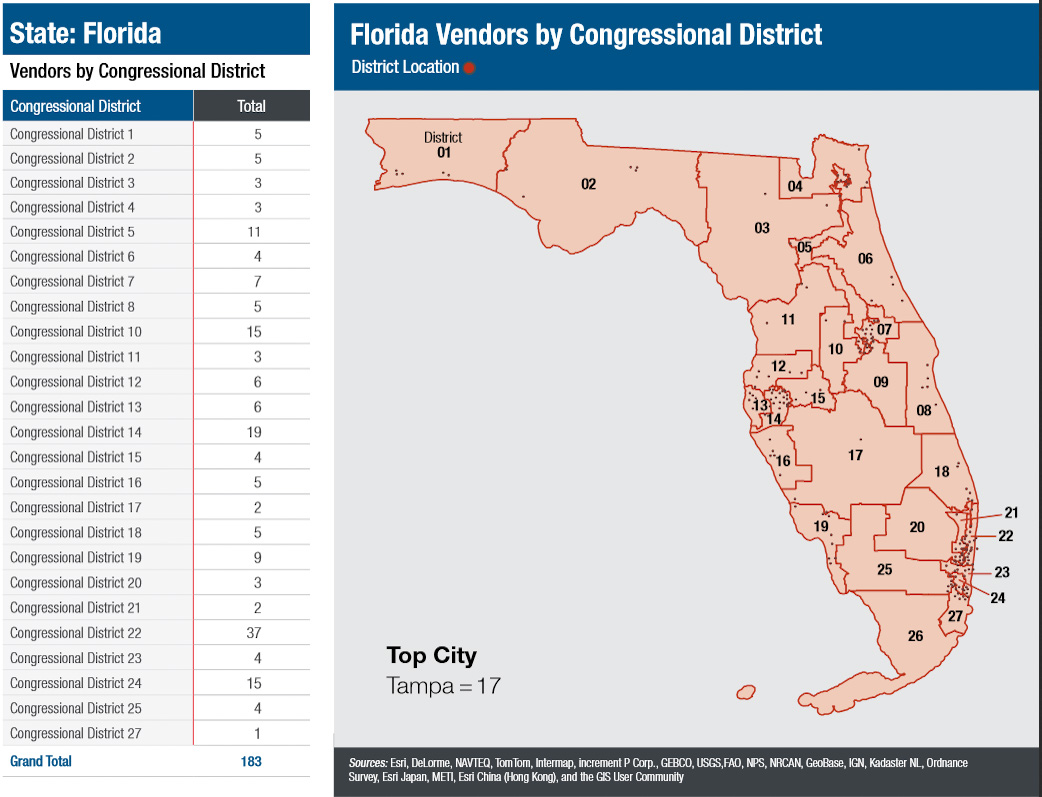 Activists are attempting to thwart even the possibility of these benefits flowing to Florida by using fearmongering. For example, one demonstrably false activist claim made by groups like Environment Florida is that fracking contaminates drinking water. Science rejects this claim. In fact, the U.S. Environmental Protection agency concluded after a five-year study that fracking “[has not] led to widespread, systemic impacts on drinking water resources in the United States.” Scientists and regulators from around the country, including those from the Obama Administration and its predecessors, agree.

If that is not enough, this finding has been echoed in studies by the California Council on Science and Technology , the US Geological Survey, the Proceedings of the National Academy of Science, researchers at Syracuse University, the U.S. Department of Energy and Ground Water Protection Council, and many others. Anti-fracking activists targeting Florida, then, are knowingly and intentionally spreading falsehoods in an attempt to scare state residents.

Similarly, anti-fracking activists continue to claim that the oil and gas industry is a leading source of methane pollution, despite the fact that this has been debunked by the U.S. Environmental Protection Agency.   As noted by Ayers:

“This year’s Greenhouse Gas Inventory report from the EPA shows that methane emissions from the gas and oil trade account for only 1.07 percent of national greenhouse gases, a meager amount given the size and scope of the industry. To lend perspective, agriculture currently accounts for 9 percent of greenhouse gases. Although, following the logic of environmental extremists, all agriculture would need to be shut down immediately.”

Despite the claims of activists, Florida’s oil and gas industry has been operating safely and responsibly for many years, and it will continue to do so regardless of whether or not energy companies explore new formations that may require new well completion techniques. Like tourism, international trade, and the space industry, energy will continue to be an important part of Florida’s economy and activists do Floridians a disservice by stoking fears about a well-understood and fundamentally safe technology.