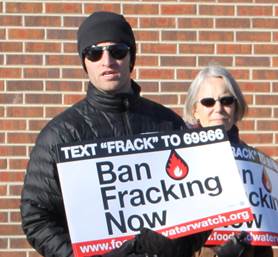 Anti-fracking activist groups are using the Colorado oil and gas task force process to build support for a statewide ban on hydraulic fracturing, which would shut down energy development across the state, not tighter regulations or more “local control.”

“I call upon the task force members, if we are really serious about protecting Coloradans from fracking, the recommendation should be a ban on this dangerous, industrial practice.

Anything short of that is going to leave us all exposed and will not be doing us justice and protecting our health, safety, and property.

So thank you all so much for coming out, and let’s make sure that we tell the task force that we need a ban on this dangerous, industrial practice.”

The task force was established last year to remove two anti-energy measures from the statewide ballot. The ballot initiatives, which were promoted as measures to increase local involvment in oil and gas regulation, were actually “extreme measures that would drive oil and gas out of Colorado,” according to Gov. John Hickenlooper when he announced his opposition in July.

“This isn’t about banning fracking, it is about giving communities the ability to put some controls on development — community by community.”

This is just the latest confirmation that the activist groups who pushed last year’s “local control” ballot measures, who are now lobbying the oil and gas task force, are not making good-faith suggestions about how to improve the way oil and gas is developed in Colorado. As Sam Schabacker says, they want nothing short of a statewide ban in Colorado, and that should matter to the members of the task force and those following its proceedings.