For Now, Youngstown Fracking Ban Measure Will Not Appear on Ballot For Seventh Time

After six consecutive defeats at the ballot box, the Mahoning County Board of Elections voted unanimously Wednesday to reject a Pennsylvania-based anti-fracking group’s seventh attempt to get a so-called “Community Bill of Rights” measure aimed at banning fracking in Youngstown on the November ballot.

The election board found the Community Environmental Legal Defense Fund’s (CELDF) ballot measure conflicts with state laws that clearly articulate that local governments in Ohio cannot regulate fracking and therefore ruled the measure to be “invalid.” In anticipation of defeat, CELDF brought in its team of lobbyists and lawyers to sign petitions to immediately challenge the decision, and it plans to file a suit with the Ohio Supreme Court in response to the county board’s decision, prolonging the CELDF’s well-documented litigious war on local Ohio communities. For now, the taxpayers of the City of Youngstown will be relieved of additional charges incurred from the ongoing Community Bill of Rights defeats, which a recent EID investigation revealed has already cost the city over $185,000. 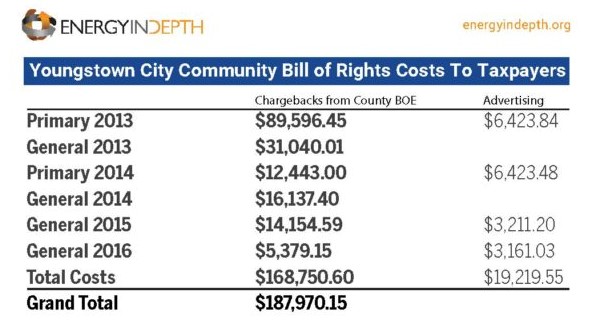 “I took an oath to follow the law and the constitution of the state of Ohio.”

On the other side of the political aisle, Mark Monroe, Republican County Party Chairman and member of the Mahoning County Board of Elections, said,

“Upon our review, it certainly appeared that both the anti-fracking issue and the so-called ‘fair elections issue’ both contained provisions that were outside the authority of the city of Youngstown. So under the provisions of House Bill 463, we really had no choice but to not certify those issues to the ballot.”

Do as I say not as I do At the Mahoning County Board of Elections meeting, a protestor said,

“We have seen nothing but big business money thrown at the drinking water protection community bill of rights to defeat it — over and over again.”

The statement is unbelievably ironic, as for years we’ve known that CELDF has been a cash cow for lobbying policy and a factory of unsuccessful litigious battles to drive regulation in Ohio. In 2015 alone CELDF reported over $1.4 million in assets, swelling its coffers by over 75 percent in just the past few years. CELDF has also taken to the social media and CrowdJustice to attempt to raise more money to provide “free legal advice as well as legal challenges” across the state.  The “free legal advice as well as legal challenges” will include the lawsuit filed with the Ohio Supreme Court in response to the Mahoning County Board of Elections decision. Ahead of the unanimous vote to reject the so-called Community Bill of Rights, local anti-fracking activist Susie Beiersdorfer was caught by EID actively fundraising for CELDF on her social media page. As you can clearly see, CELDF has been, and still is, the driving force behind a very small group of environmental activists targeting Ohio. 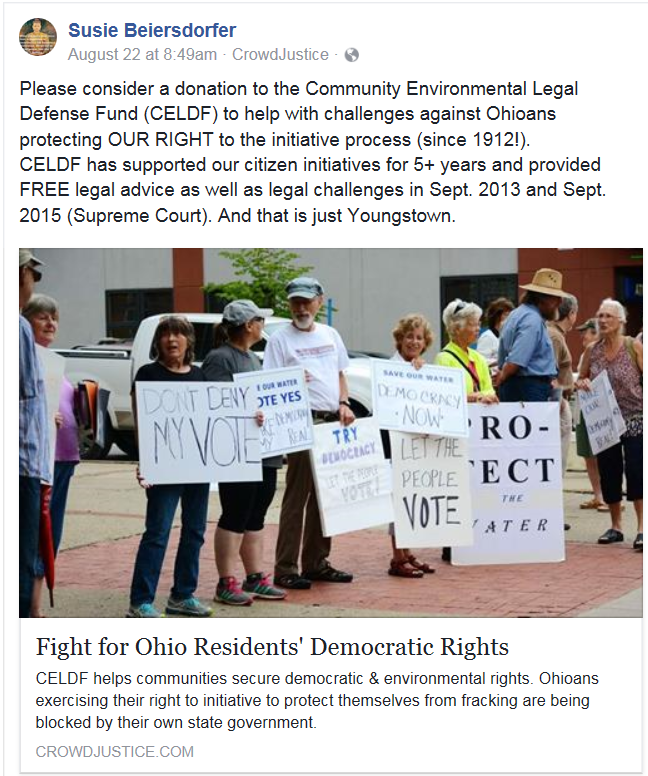 Beiersdorfer’s comments after the Board of Elections decision echoed familiar CELDF talking points,

“We are no longer just the anti-fracking activists; we are also the pro-democracy activists,”

However, democracy has occurred in Youngstown six consecutive times and in all six votes, the people spoke and rejected the anti-fracking Community Bill of Rights local ban. In the world of the most extreme fringe environmental activists, like CELDF and Beiersdorfer, “democracy” is defined as taking people’s private property and bankrupting local communities.  Recall that in 2015, the founder of CELDF said,

“If you are going to put all that work into a ballot initiative, why not do a ballot initiative that bans all finance companies in New York City from funding new projects that exasperate climate change? Why not do something real…why not do something real…cause people are saying to themselves, ‘it would be illegal, it would be unlawful, it would be unconstitutional, because you are taking their property’ well..(expletive), it’s time.”

And while CELDF continues to raise more cash to fund their litigation factory, taxpayers will continue to foot the bill.  For example, there’s no doubt the Mahoning County Board of Elections will have to incur costs to defend itself against CELDF’s legal challenge of the unanimous, bipartisan decision made Wednesday. But according to CELDF leadership, bankrupting cities is not only fine by them, but may actually be necessary to advance a broader anti-fracking agenda:

“If a town goes bankrupt trying to defend one of our ordinances, well, perhaps that’s exactly what is needed to trigger a national movement.” (emphasis added.)