The National Geographic Voices Blog published a story by the International League of Conservation Photographers (iLCP) this week aimed at stoking fears over unfounded claims that volatile organic compound (VOC) emissions from shale development pose a threat to public health.

Considering the piece was authored by a “reporter” from the Environmental Integrity Project — which receives funding from the anti-fracking Park Foundation and was responsible for a 2014 report that incorrectly claimed wells were being fracked with diesel — it comes as no surprise the story’s claims are not only based entirely on the anecdotal accounts of an anti-fracking activist, but also completely ignores the fact that the story’s central claim has been completely debunked.

The story centers on anti-fracking activist Jane Worthington, who claims that her daughter has suffered numerous ailments attributable to benzene exposure at Fort Cherry School due to its close proximity to shale development.  To their credit, the Environmental Integrity Project reporter does note that Worthington has “become a locally well-known anti-fracking activist.” But the story does not mention that a study commissioned by the Fort Cherry school board found no adverse impacts from shale development taking place nearby.

The study took continuous air measurements at the school and a residence — both located 900 meters from the drilling site — before, during and following fracking operations over a three-month timespan in 2011 and 2012, concluding,

“The primary finding of this study was that the presence and operation of a hydraulic fracturing well pad in Washington County, PA, did not substantially affect local air concentrations of total and individual VOCs…”

More specifically, emissions collected during development operations were similar to the baseline levels (i.e., before fracking). From the study, 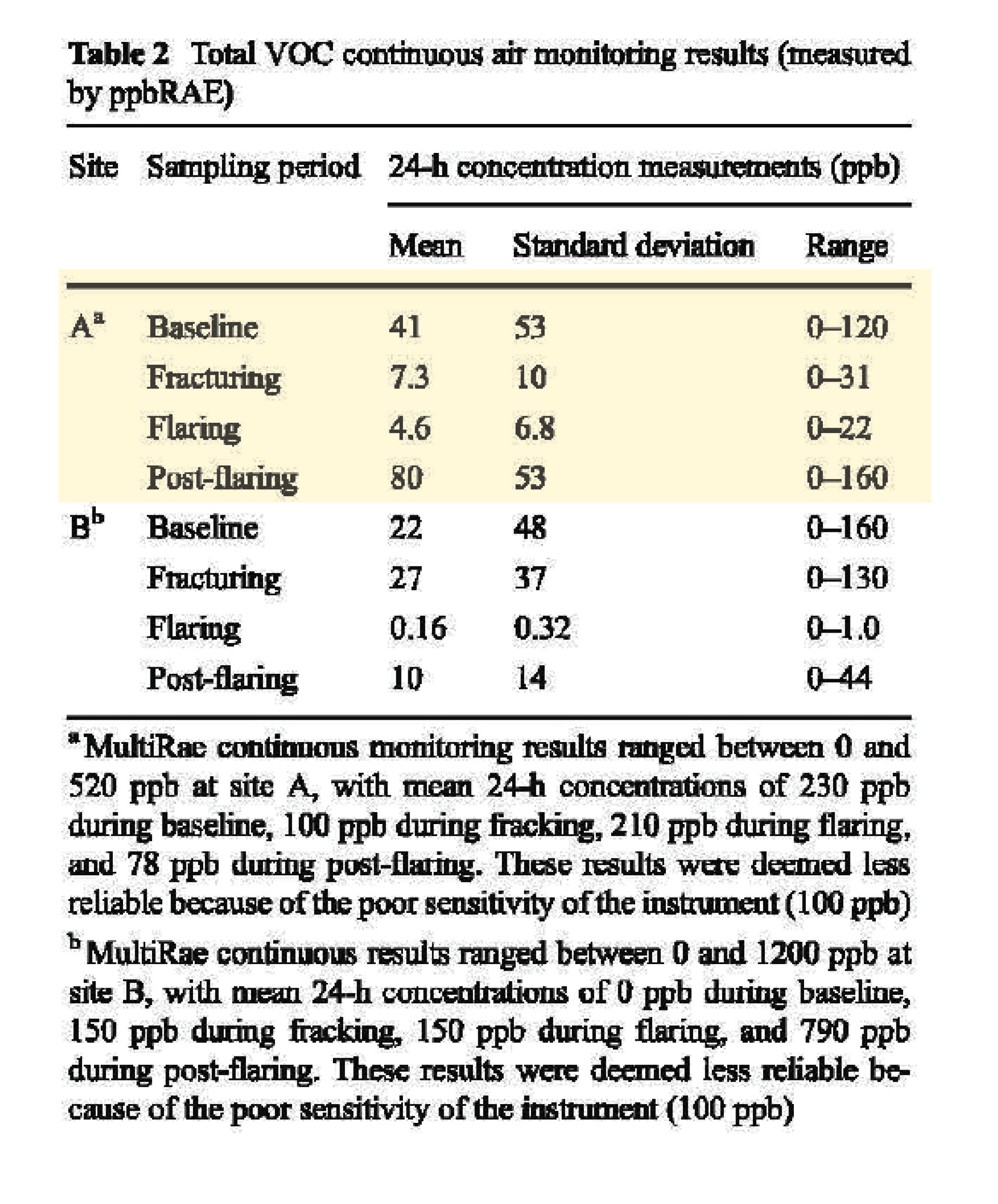 The study even states “… the data for site A showed that the average 24-hour TVOC concentrations were markedly lower during the fracturing and flaring periods; thus, as source unrelated to the well pad activities is likely to be responsible,” speculating vehicle exhaust could be the cause.

Also, the VOCs detected, benzene included, were consistent with background levels. From the study,

“Several individual volatile compounds were detected in the 24-hour samples, but they were consistent with background atmospheric levels measured previously at nearby sampling sites in other areas in Washington County.”

As the following graphic from the study illustrates, emissions detected at the sampling sites were right in line with (and in some cases lower) than a pair of background locations (highlighted in yellow) that are not close to shale development.

VOCs detected were also below health protective levels. From the study,

“Furthermore, a basic yet conservative screening level evaluation demonstrated that the detected volatile organic compounds were well below health-protective levels.” 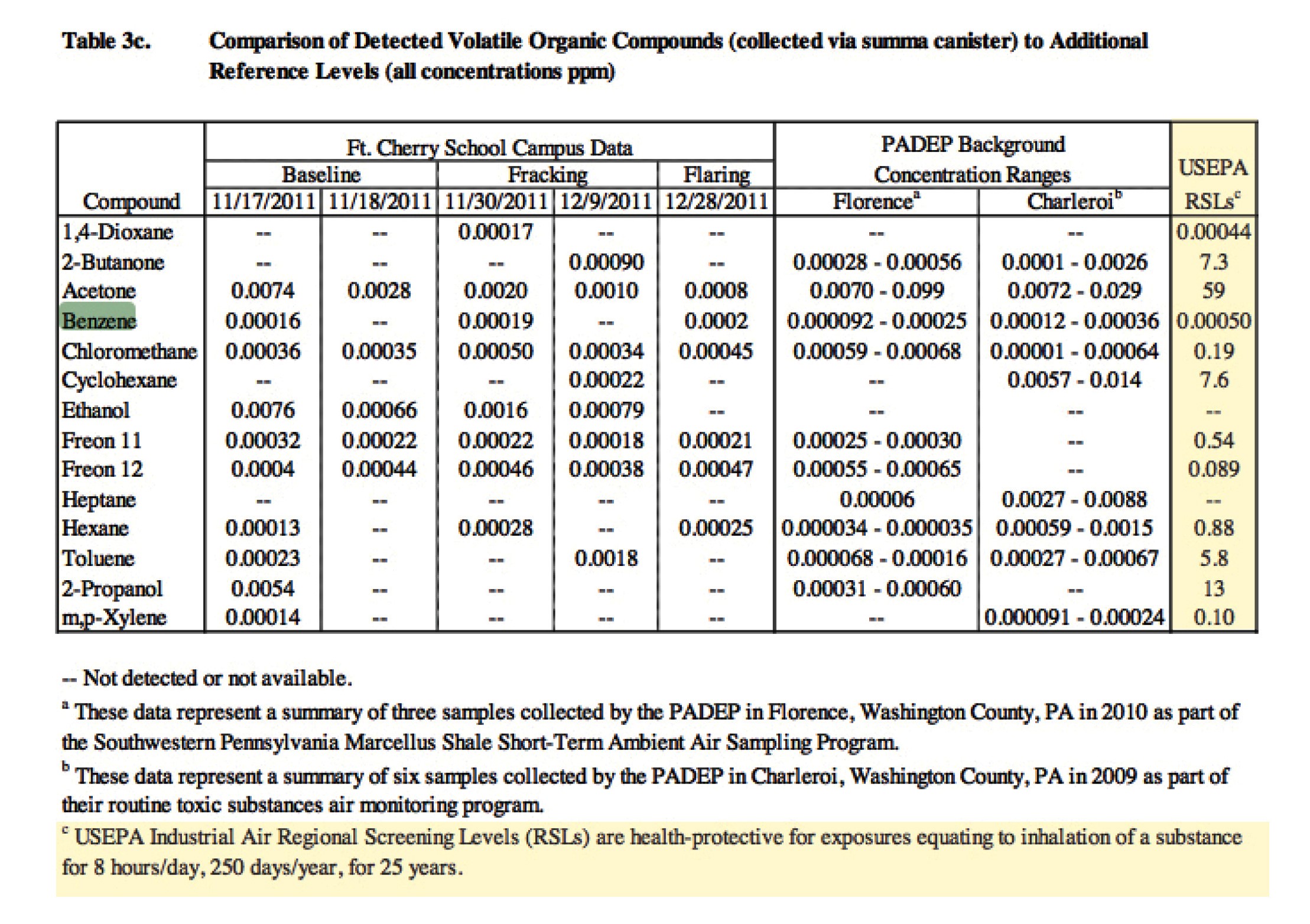 The above tables from the study also show no elevated levels of benzene, which completely contradicts the story’s claims that problems are attributable to benzene exposure from period when wells were being actively drilled near the school.

The story also suggests that fracking is to blame for Worthington’s daughter having asthma, another favorite claim of anti-fracking activists.

But as EID has recently noted, there is no evidence linking fracking to causing asthma or increased asthma exacerbations. Washington County’s 2013 asthma hospitalization rate (13.7 per 10,000) is actually lower than the state rate, according to Pennsylvania Department of Health data, and asthma hospitalization rates in Pennsylvania have actually declined from 19.2 per 10,000 a year to 14.2 per 10,000 between 2009 and 2013 — which just so happens to be the time the shale boom really took off.

This is partially because increased use of natural gas has dramatically reduced a number of criteria pollutants that can trigger asthma attacks — PM. 2.5, specifically — which is why Democratic presidential nominee Hillary Clinton released a factsheet this year touting that fracking prevented “100,000 asthma attacks in 2015 alone.”

This study is just one of many conducted both in the Marcellus and elsewhere that have taken actual air measurements near well sites and shown that emission levels are protective of public health, including:

Ironically, the story also notes that Worthington has a job that was directly created by shale development, but then turns right around and downplays the economic impact fracking has made in Washington County,

“The job creating aspect of fracking is part of the equation, and it has to be part of the dialogue, but slick public relations people and heavily funded lobby groups have inflated the impact of jobs on the local community while successfully cloaking, almost entirely, the serious health and environmental risks.”

Again, the facts debunk both claims.

The tone and complete disregard for the facts presented in this article are no shock, considering National Geographic was responsible for a similarly fictional account of North Dakota shale development in its recent “Fracking Hell” episode of its Underworld Inc. series.

This story was predictably trumpeted by card-carrying members of the anti-fracking echo chambers such as Food & Water Watch and the Sierra Club, but the facts show that shale development is not only protective of public health, but has provided economic opportunity for Washington County and Pennsylvania as a whole — Mrs. Worthington included.