A new Pew Research Center survey found that 42 percent of Americans credit advances in technology with having the most impact on improving lives over the last 50 years, followed by medicine and health advancements with 14 percent. And while only five percent of respondents felt energy and the environment should top the charts, the reality is that it is because of energy  – specifically the oil and gas industry  – that many of the technological innovations over the past 50 years have been possible.

According to Pew, these responses were similar to those given in two separate surveys in 2016, when 22 percent said the technological revolution was one of the most significant events in history and 52 percent said that technology had a generally positive impact on society as a whole. Perhaps more telling, 22 percent and 20 percent of participants in the latest survey said advances in technology and medicine, respectively, would continue to have the most significant impacts on life for the next 50 years.

While the survey doesn’t specifically mention shale or the petroleum industry, technological advances that have improved daily lives and extended life expectancy are absolutely connected to oil and natural gas in both obvious and not-so-obvious ways.

Most associate oil and natural gas with things like fuels used for transportation, heating homes, cooking and providing feedstock for power generation. But in addition to all of these uses, there are more than 6,000 products that are made from petroleum. The following EID infographic shows a few of these products: 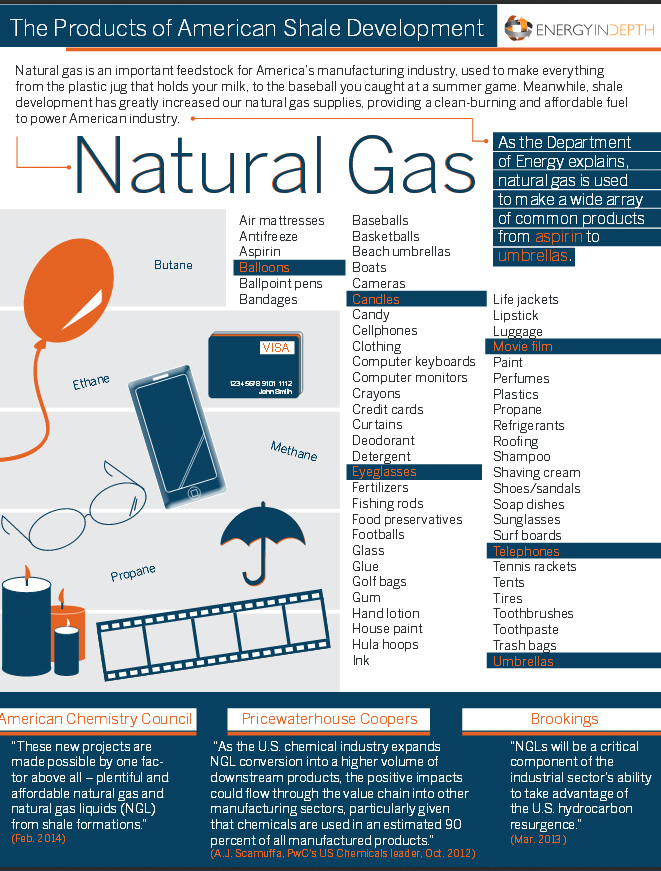 How is that possible? Natural gas is a clean-burning and affordable fuel that has a multitude of uses. There are some natural gas plays — like those found in the Utica, Eagle Ford, and parts of the Marcellus Shale — where there is an abundance of what is known as “wet gas.” This gas is comprised of natural gas liquids (NGLs) in addition to the more commonly discussed methane that is used for heating and power generation. NGLs include propane, butane, isobutene, pentane, and a byproduct that is the basic building block for plastics – ethane.

Oil and natural gas, and ethane in particular, have been a staple in the advancement of technology, enabling the development of everything from cell phones to the dashboards in cars. It is because of these petroleum products that Americans can communicate and travel easier, and have an array of comforts many of us take for granted daily as the following EID infographic shows: 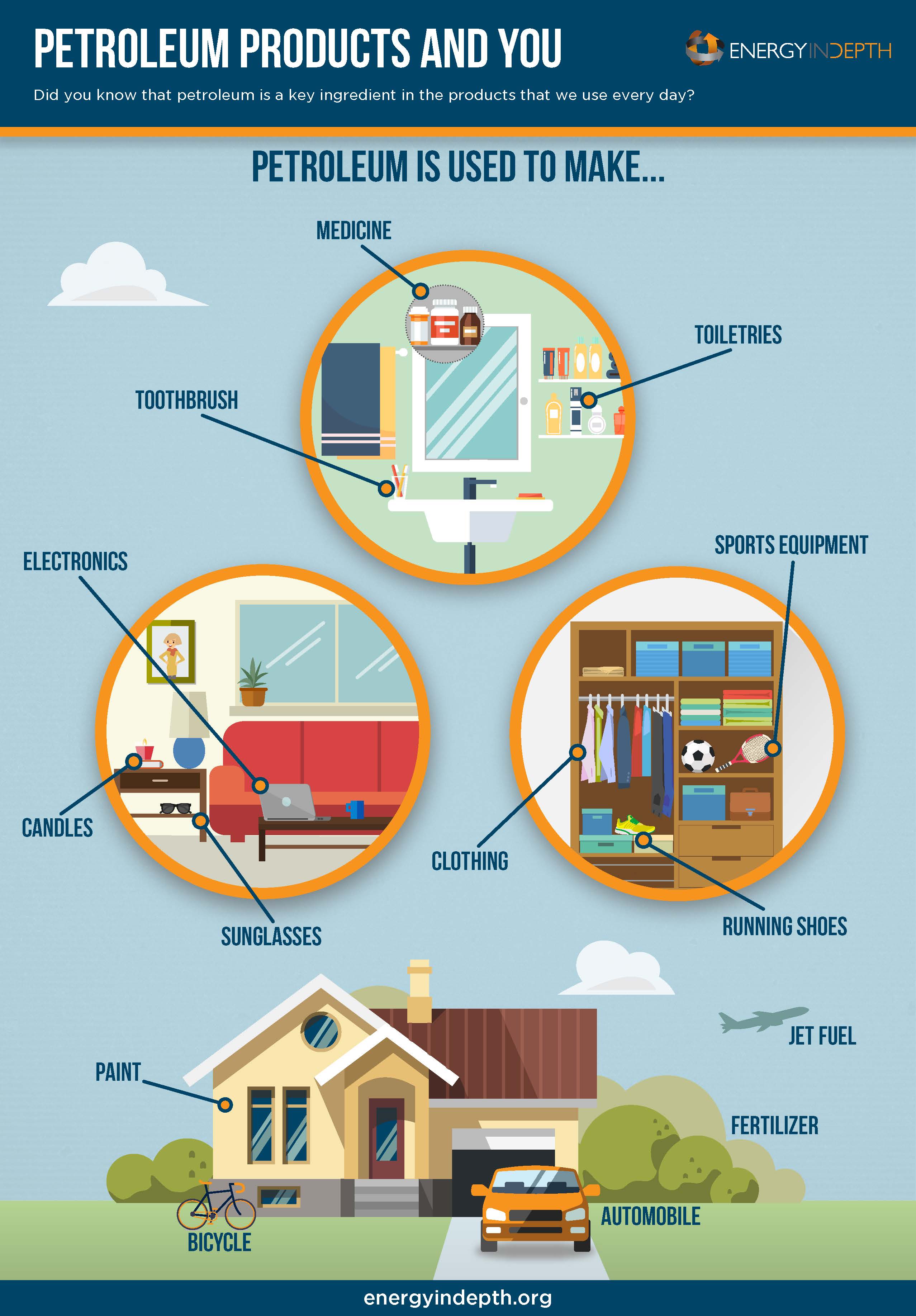 What’s more is petroleum products have helped to extend modern lifespans and provided the means for life-saving technologies, as another EID infographic explains: 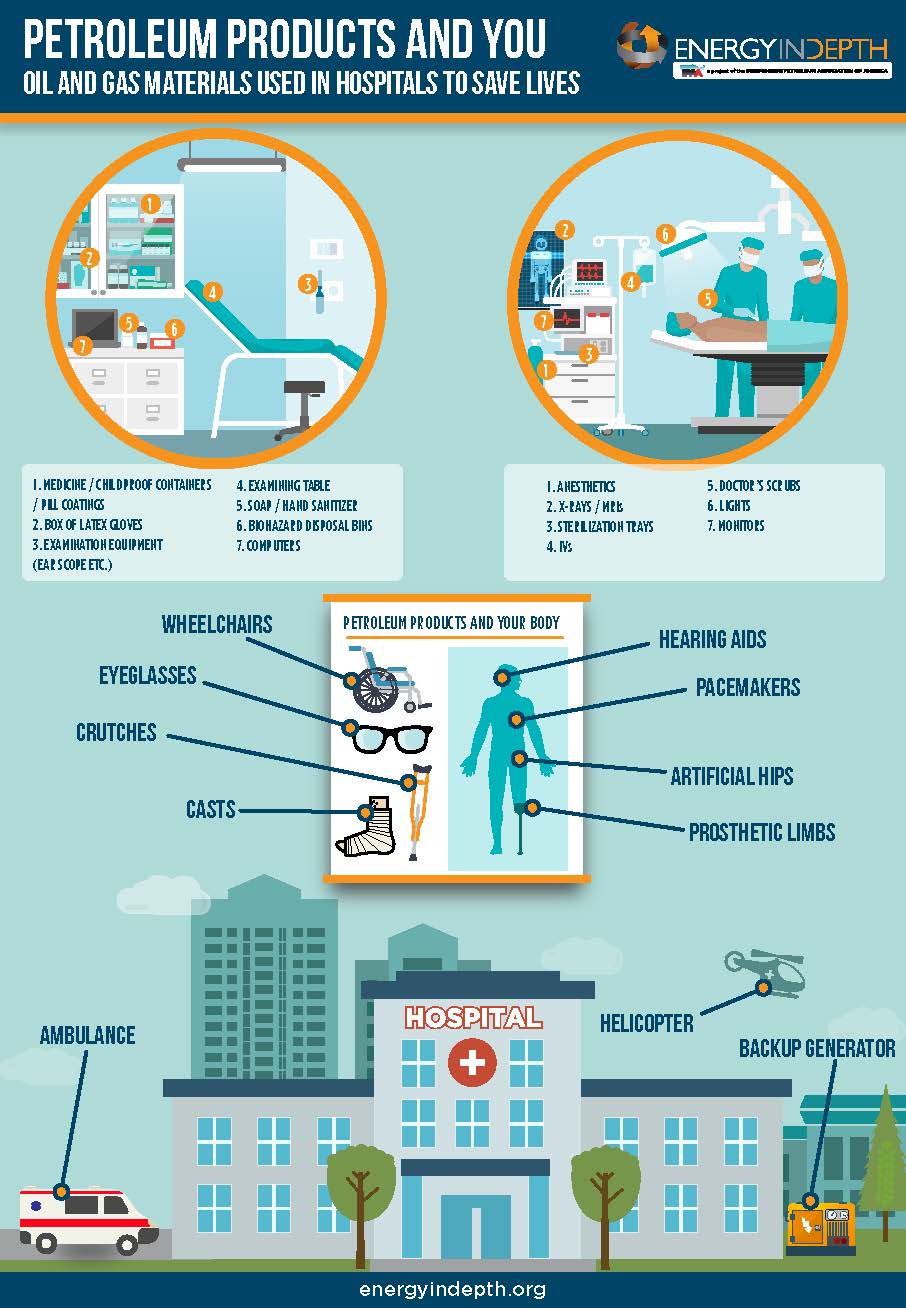 It is because of advances in technology within the oil and gas industry itself that America is now on its way to energy dominance. Thanks to improvements to hydraulic fracturing and horizontal drilling, a vast abundance of oil and natural gas has been unlocked from previously unviable shale formations.

The shale renaissance that has occurred over the last decade or so has enabled the United States to become a global leader in exporting liquefied natural gas (LNG), which has been and will continue to be a boon for the U.S. economy.  It is providing the feedstock needed to bring back U.S. manufacturing and helping to rejuvenate the American chemical industry. And it is significantly lowering U.S. carbon emissions by providing a readily available supply of natural gas to be used for power generation, while significantly reducing air pollution.

So, yes, as 56 percent of Americans acknowledged in the latest Pew survey, advancements in technology and medicine have had profound impacts on our lives and livelihood. Life expectancy has increased over the last half century with a newborn in 2015 expected to live to 79 – eight years more than those born in 1960. Thanks to the shale renaissance made possible by fracking, the oil and gas industry will be even better able to provide the feedstock it always has to fuel those innovations and improvements.