Four hundred days is a long time — plenty of time to enact a bill passed by a combined 160-12 vote.  It’s also plenty of time for anger and frustration to rise to a palpable level. That is exactly what happened on Tuesday in Marion at a press conference hosted by GROW-IL to mark the 400th day since Gov. Pat Quinn signed the Illinois Hydraulic Fracturing Regulatory Act into law.

The frustration lies with the IDNR, which has yet to complete the necessary rule-writing process on the bill and has reportedly hired just four of the 53 employees needed to do so, as a November deadline creeps closer and closer.

Ten speakers from Southern Illinois called for the IDNR to develop a sense of urgency and issue the rules of the IHFRA, seizing a much-needed opportunity for Illinois’ struggling economy.

“I think you’d be hard-pressed to find any other legislation or rules that have taken 400 days to be enacted,” Illinois Manufacturers’ Association COO and Vice President Mark Denzler said at the event. “We want jobs. It’s time to move forward.” 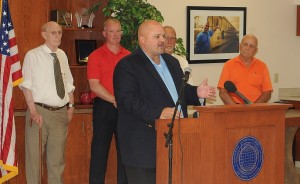 The potential economic impact fracking could have in Illinois is undeniable. A study released by Illinois State University professor Dr. David Loomis indicates that hydraulic fracturing in the New Albany Shale could result in $9.5 billion in economic impact and up to 47,000 jobs annually.

Timely implementation of the bill would seem to be a no-brainer for a state suffering from 7.1 percent unemployment and $5 billion worth of debt.

“We could put people to work and balance the budget — that’s what we’re all here today about,” State Sen. Gary Forby (D-Benton) said. “There is almost $9 billion worth of tax money in this bill. …Even if it was half that it’d be great.” 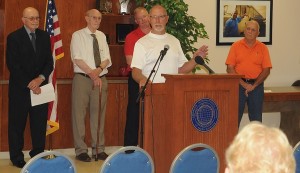 The situation mystifies longtime Marion Mayor Bob Butler despite acknowledging that he’s met with similar challenges in Illinois before.

“The state of Illinois very rarely does anything right,” Butler said. “They did, however, go in the right direction when they passed the fracking legislation. It seems to be the most strict, toughest legislation of that sort in the country. Having said that, the state reverted back to usual practices — to screw things up.”

“I wish the politicians in the state would get their heads screwed on straight and do what ought to be done: get the rules and regulations in place and let’s get this thing moving,” Butler continued. 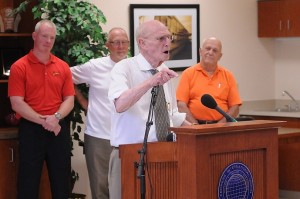 Both Butler and State Rep. Brandon Phelps (D-Harrisburg) placed much of the blame on a small but vocal contingent of anti-fracking activists who have infiltrated Southern Illinois.

“I’ve been the mayor of the city of Marion for a while and I don’t know of any project that we have ever undertaken that there wasn’t some jackass crawl out of the woodwork and oppose it,” said Butler, referring to the anti-fracking movement’s blatant efforts to delay fracking Illinois.

Phelps was quick to point out that the anti-fracking movement does not represent Southern Illinois residents saying, “Like I said: outside groups. They are not from Southern Illinois and they need to go back home and leave us alone.”

Southern and Central Laborers’ District Council Business Manager Clint Taylor stated that the petroleum industry, which has a long history in Southern Illinois, has provided opportunities for many families over the years. But Taylor now watches as Southern Illinoisans struggle to find work while his counterparts in states such as Pennsylvania, Ohio, West Virginia and North Dakota rave about the economic booms shale developments have brought them.

“It’s our turn to have that,” Taylor said. “It’s our turn for Southern Illinois to come back to what it used to be. That’s what this (shale development) is gonna do.”

Employers like Mitch Garrett, owner of Shawnee Professional Services in Vienna and Benton, and Curt Bradley, owner of a pair of Southern Illinois petroleum-related service businesses, stand ready to put people to work in Illinois, but the clock is ticking on how long they will be able to wait for the rulemaking process to be completed.

Garrett, a Southern Illinois native and Southern Illinois University alum, is keen to put fellow Illinoisans to work. In fact, 20 of his 50-plus employees are SIU graduates. But the delays have led to his company to do most of its business in nearby Kentucky, Indiana and Tennessee.

“We absolutely want to work here in Southern Illinois — this is where we’re from,” Garrett said. “We want to put people to work. We believe our greatest resource is completely untapped.”

Bradley routinely fields inquiries regarding possible employment opportunities at his businesses, but has to turn people away while he continues to wait. 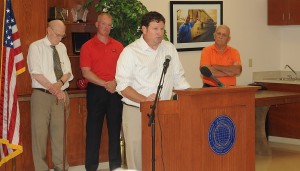 “It’s been really disheartening to have the money laid out in anticipation and see this thing get delayed so much,” Bradley said.

Woolsey Operating Companies owner Wayne Woolsey lauds the potential of the Illinois Basin, comparing it favorably to Kansas, where his company has enjoyed great success. He hopes to continue that success in Illinois, where his company has leased 250,000 acres and is planning on building an office in Fairfield. But the rulemaking delays are forcing Woolsey to consider other options.

“We’re at the stage where we’re ready to do a horizontal well with high-volume, hydraulic fracking,” Woolsey said. “And I’m afraid if we don’t see something soon we’ll be doing it over in Indiana.”

The prospect of losing jobs to neighboring states fans the flames of frustration among local leaders. “How many times have we lost business to other states because of the way we operate here in Illinois?” said Butler.

Denzler concluded the conference by emphasizing the need to focus on the will of the people in Illinois. “You’ve heard from local, Southern Illinois people today who’ve said, ‘We want jobs. Enough is enough.’ We have people here that have the skills, that have the training. They are looking for work. And you have employers coming in that are looking to hire. It’s a perfect match.”