UPDATE II (10/15/2012, 10:46am) — Michael Levi has a new paper in the Journal of Geophysical Research in which he finds NOAA’s methane leakage estimates to be “unsupportable” based on what he terms the “wrong interpretation” of the data. NOAA famously — or perhaps infamously — claimed leakage was as high as 7.7 percent, with an average of about four percent. Levi, however, finds the rate to be a fraction of that: one to two percent, which is in line with what other credible studies have found. Among NOAA’s errors of analysis, according to Levi, is that “Colorado has imposed tough rules on methane emissions since the NOAA data was collected in 2008,” a fact that we at EID also highlighted shortly after release of the paper in February (see below).

UPDATE (5/18/2012, 4:54pm) – NOAA’s paper on methane emissions from the Denver-Julesburg Basin was touted this week by NPR as a major clue in the ongoing “detective story” about how much natural gas is lost during the production, transmission and distribution of oil and gas. Like many other news outlets, NPR does its best to portray methane emissions from oil and gas as a mysterious, lurking threat to the environment:

“A lot of research shows power plants pump out fewer greenhouse gases when they run on gas instead of coal. But no one really knows how much natural gas leaks out when companies are drilling for gas and getting it to power plants. Natural gas is primarily methane. …

Methane is very effective at trapping heat in the atmosphere. And already, natural gas production is the biggest manmade U.S. source of methane. …

The way it is now, the Environmental Protection Agency relies on estimates of methane emissions. They’re based on some measurements of emissions from individual pieces of equipment and lots of complicated math.”

Chilling. Especially the part about complicated math. There’s just one problem – the story about methane emissions isn’t scary at all, once you hear the facts that NPR left out.

True, the EPA’s current estimates say oil and gas systems are the nation’s “largest human-made source of methane emissions.” But even so, the estimated total is still a tiny fraction of overall U.S. greenhouse gas emissions – only 3.8 percent, according to the EPA.

Here’s another less-than-scary plot twist – that estimate is inflated, so the real level of methane emissions is much lower. Here’s what analysts at IHS CERA and URS Corp. have said about EPA’s estimates:

“[I]ts estimates of methane emissions are dramatically overstated and it would be unwise to use them as a basis for policymaking. … [T]he estimates are not credible…” (IHS CERA report, p. 3)

“It appears that the EPA’s [completion estimate] for unconventional fractured wells is potentially overestimated by 1200%.”  (URS Corp. report, p. 4)

NPR also failed to mention that oil and gas systems only became the EPA’s number-one source of methane emissions when the agency arbitrarily doubled its estimate last year. Before the EPA simply changed a few numbers in a spreadsheet, farm animals were the biggest source of methane emissions. But that kind of detail might invoke sympathy towards the oil and gas industry – or menace towards cows – so NPR decided to leave it out.

NPR also concealed from its audience that oil and gas companies are monitoring their methane emissions today, in accordance with the EPA’s newly established mandatory GHG registry. The first reports will be submitted to the EPA in September, and this huge data set will provide unprecedented clarity about the real level of methane emissions. But that’s less-than-scary, and the regulation that requires the monitoring has a boring name that sounds like part of the tax code – Subpart W.  So NPR just left all those facts out, too.

As for NOAA’s paper, NPR spends considerable time profiling the author, detailing her “painstaking, on-the-ground detective work” and finding frightening ways to describe her findings, like “very high levels of methane gas” and “chemical cocktail.” EID has no quarrel with Gabrielle Pétron. In fact, we’re glad Pétron went to the trouble of having her findings peer reviewed, unlike some other NOAA scientists in Colorado.

But nowhere does NPR mention any of the study’s shortcomings. As EID has detailed previously (see below), the measurements in this study predate Colorado regulations that required major cuts in smog-forming emissions and methane. In effect, that means the study’s findings significantly overstate the real level of methane emissions from Colorado oil and gas operations today. NPR also omitted another less-than-scary fact about the NOAA study. The “very high levels” of methane were actually lower than NOAA recorded at another observation tower in the middle of the Chequamegon National Forest in Wisconsin.

Perhaps worst of all, NPR also failed to mention that the EPA recently finalized federal regulations for oil and gas development that will lead to major reductions in methane emissions. That’s right – on top of monitoring methane, the federal government is demanding oil and gas companies cut those emissions, too. While the industry still has major concerns about the workability of the new EPA rules, it’s hard to imagine why a news report about methane emissions would fail to mention a new regulatory program that will cut methane emissions. Unless, of course, it makes for a scarier story if you talk about potential problems as if there are no solutions.

To hear the folks at Nature and the Denver Post tell it, a recent study from the National Oceanic and Atmospheric Administration (NOAA) and the University of Colorado proves that producers in the Denver-Julesburg Basin of northeast Colorado are losing four percent of their total production of natural gas – frittered away, right into thin air. Some have even suggested the study validates the Howarth paper from last year, including the discredited professor himself.

Unfortunately for Prof. Howarth, the deeper you dig into the DJ Basin report, the clearer it becomes that the NOAA paper isn’t at all comparable to the Howarth paper – mostly, for starters, because they study two entirely different things. What’s far less clear: the extent to which NOAA’s conclusions are even relevant anymore in a modern operating context, given that most of the agency’s data is nearly half a decade old.

Below, we identify a few key facts from the NOAA paper that, taken together, provide some additional context for those who care to consider it: 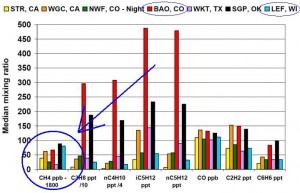 “In the Cornell study, scientists estimate leakage from drilling a well, when a lot of methane is released, followed by production. In the NOAA study, the scientists looked at overall emissions for the entire basin, including new and old wells, producing or being drilled, as well as sources such as leaks from compressors and gathering pipelines. Pétron agreed that the two studies cannot be directly compared.” (E&E News, February 16, 2012 (subs. req’d))