A fracking ban in New Mexico would wipe out $86 billion in GDP and nearly 20 percent of the state’s workforce by 2025, according to a new report by the U.S. Chamber of Commerce’s Global Energy Institute (GEI). The first of a seven-state series, the report examines both the positive impacts of the oil and natural gas industry on the local economy, as well as the devastating consequences of a fracking ban, as proposed by numerous presidential candidates.

In 2018, New Mexico generated $99.4 billion in GDP and had nearly 900,000 people in the workforce, according to the report. Thanks in large part to recent growth in the oil and natural gas sector, the state has also increased its GDP by $11 billion, increased its median household income by nearly $5,000, and decreased unemployment by 2 percent over the last five years.

“While slow to recover from the Great Recession, energy production has made New Mexico’s economy one of the fastest growing in the nation. The state’s residents are benefiting from thousands of newly created jobs and increased incomes.” (emphasis added)

However, under a fracking moratorium, much of this progress would be reversed. The report estimates that a ban would result in the loss of 142,000 jobs across the state and $26 billion in household income at an average of $10,723 per household in 2025. These losses would include $5 billion in higher energy costs and $8 billion in lost wages.

“To put this potential loss in perspective, more jobs supported by the oil and natural gas industry would be lost in the first year of a hydraulic fracturing ban than the total number of jobs that all New Mexico industries created in the last year.”

Devastating consequences for public education and other services

Such a ban would also limit the state’s ability to provide public services for New Mexicans. Earlier this year, Governor Michelle Lujan Grisham announced a new scholarship program to provide free four-year college to more than 55,000 high school students, thanks to revenue from oil and natural gas production in the state.

“Big, bold ideas like this are the type (of) transformational opportunities New Mexico now has because of the success and growth of the oil and natural gas industry. This is a great example of how the Governor can leverage increased oil and natural gas production to the benefit of all New Mexicans regardless of where they live, work, or go to school.”

In 2018, the oil and natural gas industry generated one third of New Mexico’s general fund revenue and provided more than $822 million to public k-12 schools, according to NMOGA. This revenue is the equivalent to 11,496 teacher salaries, or 11.7 million textbooks for students.

And this is just the beginning. In August, state economists forecasted a 13 percent budget surplus for 2020 thanks to surging oil and natural gas production. As Gov. Grisham’s office explained:

“The governor is certainly optimistic about the consistently positive revenue projections and excited by the potential, should the numbers hold, for increased investments in the areas that are priorities for hard-working New Mexicans, like child well-being, early childhood education as well as K-12 public education generally, initiatives combating child hunger and poverty, efforts to diversify our state economy and local businesses and boost workers, and programs to boost our collective public safety, including investing in long-overdue infrastructure projects.”

A fracking ban would put all of this in jeopardy. GEI estimates that a moratorium would force the state to forego $8 billion in state and local tax revenue and $8.3 billion from the federal government. These massive cuts would directly effect public services like education and health care, as well as important infrastructure improvement projects. 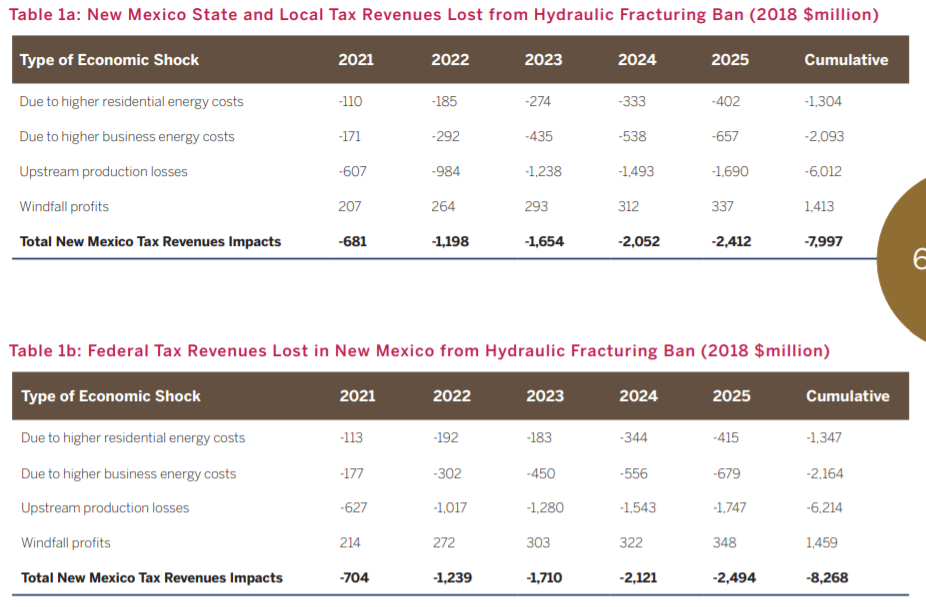 New Mexico isn’t alone. While numerous Democratic presidential candidates continue to voice support for a fracking moratorium across the United States, such an extreme policy shift would have dire consequences for American businesses, households, and even our national security. Thanks to the oil and natural gas industry, Americans have saved $1.1 trillion over the past 10 years, our country has reduced carbon emissions by more than 2.8 million metric tons, and we’ve secured our energy independence as the world’s leading producer of oil and natural gas.

“[S]topping oil and gas production is something that I wouldn’t advise to the U.S. government or another government.”