Perhaps one of the best examples of how fracking is a win for the environment and the economy can be found in Ohio, where fracking has brought more than $200 million in mineral lease and royalty revenue to the Muskingum Watershed Conservancy District (MWCD) since 2011. A direct result of leases signed with Utica Shale developers in the eastern portion of the district, the revenue has been used to improve the watershed of this political subdivision of the State of Ohio, proving that conservation and shale development can work hand-in-hand. 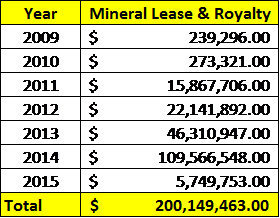 Given its location in the state, partnering with the oil and gas industry is nothing new for the MWCD. As you can see in the chart above, the MWCD received royalty payments before additional Utica Shale leasing took place in 2011. Since its inception, the MWCD has entered into leases and allowed conventional oil and gas development on its lands for the past 81 years.  Today, the MWCD has an estimated 120 producing wells on MWCD-owned property and is receiving royalties from 29 Utica Shale wells.  The proceeds from leasing and royalty payments become a critical way for the MWCD to fund its operations and make improvements to the watershed. In fact, the influx of capital enabled the Capital Improvement Plan that was initiated in 2015 and is slated for completion in 2022. The Capital Improvement Plan includes major improvements to public parks, campgrounds and marinas among other things.

As the MWCD recently said,

“It’s an exciting time for the Muskingum Watershed Conservancy District over the next 5 to 7 years, and is really a renaissance of sorts. We are in a position where we can partner with the U.S. Army Corps of Engineers in properly maintaining the 83-year-old flood control system which has been so important to the survival of many communities in the District. In addition, the new found revenue generated from Utica gas leasing opportunities now affords the district the opportunity to modernize our public parks, campgrounds and marinas to a level that our customers want and deserve. And of course, we can now augment our 18 county conservation program to coordinate and promote overall watershed management and water quality initiatives that are so vitally important to sustainable existence, as water is one of our most precious resources. As responsible stewards we foresee the future of MWCD on solid ground for the next 80 years.” (Emphasis added)

Of course, with such a focus on conservation, the MWCD and producers have worked together to provide the most conservation-friendly leases to ensure that the beauty of the MWCD will not be disrupted. Their leases include non-development provisions that prevent any rigs, lease roads, pipelines or compressor stations to be placed on MWCD-owned land.  Again, with a focus on conservation, the MWCD sold much of the water used for development via temporary water lines to well sites.  These temporary lines were responsible for removing 18,000 water truck trips in Harrison County alone. 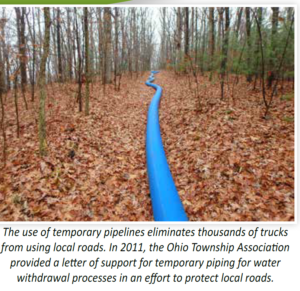 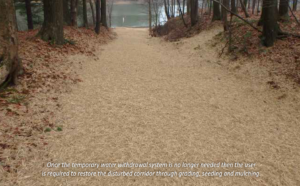 These temporary water sales are a great idea to help increase revenue for the MWCD, too, considering there is plenty of water to go around for everyone in the area. For example, the Seneca Lake summertime pool holds over 14 billion gallons of water. However, in the event of a serious drought condition, the MWCD does have the authority to shut down any water sales to protect its customers and residents.

Ironically, and not surprisingly, when negotiations for leasing and water contracts were underway, anti-fracking groups such as the Fresh Water Accountability Project were engaged in fearmongering with baseless claims that fracking would cause groundwater contamination and inhibit the very purpose of the MWCD. Of course, that hasn’t happened, and in fact the most extensive groundwater study in Ohio by the University of Cincinnati found that there has been “no evidence for natural gas contamination from shale oil and gas mining in any of the sampled groundwater wells of our study.” The simple fact is that for the past six years there have been 29 Utica Shale wells developed (by fracking) which have contributed greatly to the $200 million poured into the MWCD. This has allowed for vast capital improvements and at the end of the day has supported the core function of the MWCD — to reduce flooding and conserve water for beneficial uses in the Muskingum Watershed.

This is just the latest example of how mineral leasing on Ohio state lands has provided huge benefits for areas that have leased. MWCD proves that leasing state lands for oil and gas development has been a win-win. It’s a win for taxpayers, for the state, and for the vast recreational uses that the lands provide. Thanks to the $200 million fracking has generated for the MWCD to support major improvements to public parks, campgrounds and marinas, the outlook for summertime fun at the MWCD looks brighter than ever.