The election results are in and one thing is abundantly clear: fracking had a major impact across the country, particularly in key swing states, such as Pennsylvania and Ohio. Voters overwhelming supported candidates and campaigns who ran on issues that support domestically produced oil and natural gas. In fact, one could even make the case that what happened in swing states was a referendum on the increasingly marginalized and extreme “Keep-It-In-The-Ground” campaign.

Despite hundreds of millions spent on anti-fracking campaigns by the billionaire elites, the voters clearly saw through the Hollywood hype and instead voted for cheap and reliable American energy, manufacturing jobs, and energy security, which are all made possible by fracking.

The largest single donor in the 2016 election was California hedge fund billionaire Tom Steyer and his Nextgen Climate Action campaign against fossil fuels.  Steyer and his group dropped $100 million on this election, targeting millennials with celebrities, concerts and even tailgate parties. But none of this worked. According to the Center for Information & Research on Civic Learning and Engagement (CIRCLE), voters between the ages of ages 18 and 29, supported Hillary Clinton over Donald Trump by 55% to 37%, as compared to the 67% millennial voter support for Obama in 2012.

This isn’t Steyer’s first major failure, either. In the 2014 midterm elections, he spent more than $85 million and nearly all the candidates he backed lost their elections, leading Politico to report that he had a pretty “rough night.”

This election was no different, and perhaps Josh Fox put it best when he said he’s worried about the future of his extreme movement.

So how did they fail so miserably? Well, for starters, in key swing states like Ohio and Pennsylvania, shale development has created hundreds of thousands of jobs. And Ohio and Pennsylvania voters realize that a fracking ban will cost 862,000 jobs, $78 billion to annual GDP, and an extra $3,746 a year in cost-of-living expenses, due to higher energy prices.

Trump’s most significant wins came in areas where “Keep-It-In-The-Ground” poses a serious threat to working families, such as Ohio and Pennsylvania.

Increasingly, the construction trade unions, such as the International Union of Operating Engineers, Laborers International Union of America (LiUNA), United Association, Teamsters, International Brotherhood of Electrical Workers (IBEW), and a host of other building trades been some of the most outspoken and ardent supporters of oil and natural gas development in the country, as the vast majority of pipelines, compressor stations, and natural gas fired power plants are being built with union labor.

Policies that would stop fracking and the infrastructure required to move the product to market has a direct impact to their jobs. The union vote was significant, as Fox News reported,

“Union households – long a stronghold of Democratic support – went for Clinton by eight points. That’s a 10-point drop from Obama’s total last time, and the lowest union support for a Democrat in the past 20 years.”

In Ohio, the story was even more compelling as Fox News reported,

“(Trump)He won a majority of union members – 52 percent – a dramatic improvement over the 37 percent Romney took home in 2012.” 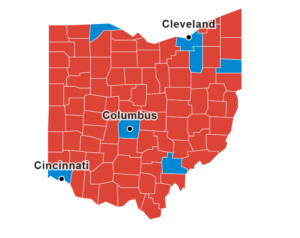 The bottom line is that the Appalachian Basin spoke loudly regarding the direction of energy policies and rejected anti-fracking campaigns. The winner last night was fracking and American manufacturing. Together, they will grow the economy and bring the jobs back to the United States, which is win for everyone.