In its “Key Messages” section, the IDDRI report states:

“Absent further policies, the US shale revolution will not lead to a significant, sustained decarbonisation of the US energy mix nor will it assure US energy security. A reference scenario based on current policies sees US emissions stagnant at current levels out to 2040, clearly insufficient for a reasonable US contribution to global climate change mitigation.”

Before we get into the bigger problem with IDDRI’s claims regarding future CO2emissions, let’s step back and recognize what has happened to date. Currently, U.S. carbon emissions are at their lowest level since 1994, according to the U.S. Energy Information Administration, which provides official energy statistics from the U.S. government. What’s one of the biggest reasons why? EIA explains:

“Despite the overall decline in renewables, the carbon intensity of power generation still fell by 3.5 percent, due largely to the increase in the share of natural gas generation…” (emphasis added)

The U.S. Environmental Protection Agency agrees. EPA administrator Gina McCarthy recently said: “Responsible development of natural gas is an important part of our work to curb climate change and support a robust clean energy market at home.” Ernest Moniz, the head of the U.S. Department of Energy, told reporters last year that natural gas has a “significant advantage” over other fuels in terms of CO2 emissions.

So we know that low-cost and abundant natural gas – made possible by shale development – is already having a major impact on reducing U.S. emissions of CO2. But what about the IDDRI claim that the “shale revolution will not lead to a significant, sustained decarbonisation of the US energy mix,” or that emissions will remain “stagnant at current levels” out to 2040? Put simply, it’s just not true.

Every year, the EIA releases its Annual Energy Outlook, which includes an analysis of energy-related CO2 emissions and gives projections based on market trends. In its latest findings, EIA projected that U.S. CO2 emissions in 2040 would be “7% below the 2005 level,” even though total U.S. energy consumption will actually grow by 12 percent. So when the IDDRI claims emissions will remain “stagnant” through 2040, that’s clearly not accurate.

And why was EIA able to project a decline in emissions? Increased utilization of “natural gas and renewables.”

That’s also important because the EIA has observed that “shale gas provides the largest source of growth in U.S. natural gas supply” through 2040, meaning the “shale revolution” as defined by IDDRI clearly will have a material impact on reducing CO2 emissions. 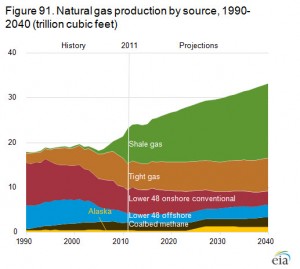 Meanwhile, the IDDRI report concludes that the EU needs “a holistic strategy” that combines “energy efficiency, eco-innovation, low-carbon energy sources, and a stronger more integrated internal market.” Those are all worthy goals, and it is helpful to see that IDDRI acknowledges that shale gas “could be a complement” in that strategy. But an overemphasis on technologies that cannot yet supply baseload power has already been tried by at least one EU country: Germany.

The results have been less than stellar for German consumers. As The Economist recently reported, the Energiewende has led to a “rising cost of electricity,” and the average household “now pays an extra €260 ($355) a year to subsidise renewables.” One report found that Germany and another country making a big push for renewables, Denmark, have the highest electricity prices in the EU.

And what about air emissions? As Bloomberg News reported last year:

“Germany’s air pollution is set to worsen for a second year, the first back-to-back increase since at least the 1980s…”

The Economist also observed that operating costs in Germany are “going up for companies, making them less competitive than rivals from America, where energy prices are falling thanks to the fracking boom.” Ironically, the IDDRI report downplays the role that shale gas is having on American manufacturing. The International Energy Agency, meanwhile, has said that shale gas will give the United States an economic edge over European and Asian manufacturing until at least 2035.

None of this is to say that we should halt investments in renewables, or that encouraging their development is the wrong course. Quite the contrary, in fact. But any assessment of energy trends must be based on empirical evidence and a realistic view of how energy markets actually work. Unfortunately, the IDDRI report not only downplayed the importance of shale, but also offered little more than platitudes and talking points on what a “better” energy mix would look like – which itself contradicts how policies encouraging that sort of future have actually played out.

It is true that shale development “has not been a panacea” for the economy or the environment, as IDDRI concludes. But just because shale has not solved every problem imaginable doesn’t mean it hasn’t had a significant impact at all. In fact, with the preponderance of evidence suggesting that shale has been a “game changer” for U.S. industry and the environment alike, the IDDRI report’s conclusions read more like a fundamental misinterpretation of reality than a sober analysis of the energy market.