Despite those setbacks, these activists are — yet again — going fishing for more taxpayer-funded fracking studies, using a recycled playbook from 2012 in an attempt to do so. After spending years in Carroll County, Ohio’s most active Utica Shale county, outside groups have now largely headed south to Monroe County to focus their efforts on another largely rural, prolific natural gas producing county. And as per usual, Ohio activists brought their usual propaganda and Columbus-based lawyers to a recent so-called “listening session,” hosted by the Ohio Environmental Council, Ohio’s environmental lobbying group, and well-known Columbus activist Julie Weatherington-Rice. But to their dismay, the event at River High School in Hannibal was a bust, as only handful of real local residents came to the meeting. As the photo below illustrates, attendance was even more dismal considering at least three of the 11 people pictured hosted the so-called “listening session.” 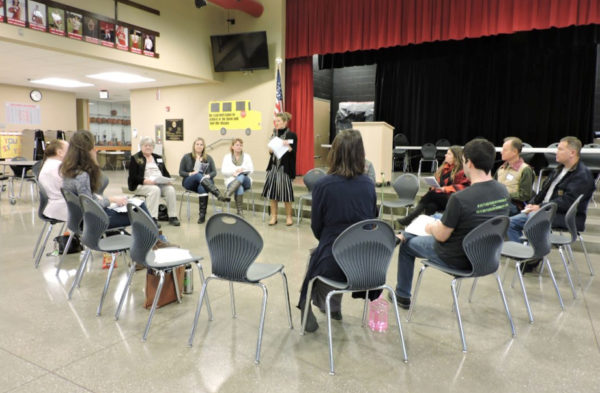 Considering the thousands of landowners who have leased in Monroe County and the incredible bipartisan county-wide support for leasing acreage in the Wayne National Forest (WNF), it’s certainly not a surprise that the room was nearly empty. So what came of this so-called listening session? According to media reports, Weatherington-Rice “said that she is working to write a grant for a health survey of the entire affected area.”

If at first you don’t succeed…

“… shared her research over the last 2-3 decades regarding protecting municipal water fields from various mineral extraction activities. Her latest analysis includes a substantial amount of information about the potential impacts of shale gas drilling and specifically research done in Carroll County for the Village of Carrollton. Dr. Weatherington-Rice unfortunately reinforced that there is little that ODNR can do to alter the expansion of gas wells even in municipal water wells fields. Furthermore, she believes that many municipalities have insufficient documentation in the event that a future contamination occurs.”

Four years after Weatherington-Rice tried to fear monger the citizens of Carroll County, the University of Cincinnati determined that after years of testing water wells, they found no connection to natural gas and methane in groundwater — an inconvenient fact that Weatherington-Rice chose not to share at the recent so-called “listening session” in Hannibal. And the latter is just one example of the numerous anti-fracking events Weatherington-Rise has shown up at throughout the state. For instance, she was a keynote speaker at a Public Health & Liability; Fracking & Ohio’s Future Conference, where she again peddled her misinformation campaign, warning an audience about the her incorrect opinion about fracking and groundwater contamination, saying,

“… at any given time in Ohio somebody in Ohio has either lost a water supply, are fighting to hold onto one, are trying to clean one, or are looking for a new one because they lost one.”

As a reminder, claims of groundwater quality or quantity issues from horizontal drilling and hydraulic fracturing are completely unfounded. For example, the most robust study ever conducted in Ohio on groundwater and fracking found:

Fringe environmental activists like Weatherington-Rice continue to prove they are completely out of touch with the people who live and work in mineral-producing areas of Ohio. In fact, just last week, schools in southeastern Ohio explained that they are excited for more development in areas such as Monroe and Washington Counties, as Frontier Local Schools’ Treasurer Lee Howard explained,

“The school district would benefit from leasing also from utility personal property taxes on any utility construction like water and power or gas pipelines they would run through the district.”

So it should come as no surprise that the turnout for this Columbus lobbyist roadshow to rural Monroe County for this so-called “listening session” likely “disappointed” these anti-fracking activist once again.