Last week marked another milestone for shale development in Pennsylvania, with the groundbreaking ceremony for the “Liberty” power plant in Asylum Township.  The natural gas-fired facility will be the first power plant in Pennsylvania specifically developed to use Marcellus gas and will generate enough electricity to supply over a million homes.

“According to a third-party economic analysis, the Liberty power plant will contribute an estimated $5.97 billion to the area’s economy during construction and the facilities first 10 years of operation.”

The power plant will also help put Pennsylvanian’s back to work – after all, Pennsylvania energy means Pennsylvania jobs.  The project will create approximately 500 jobs during the construction phase and an estimated 27 skilled jobs to operate the facility and 45 indirect jobs within the community to support the plant. 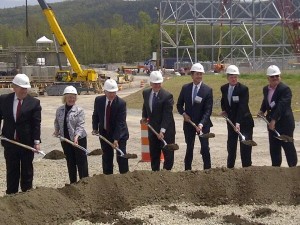 While cheap, abundant natural gas has brought manufacturing jobs back into the United States, the development of the Marcellus Shale has created a remarkable growth in energy related jobs in Pennsylvania. Todd W. Carter, President and senior partner of Panda Power Funds, had this to say about the project:

“We are investing hundreds of millions of dollars here precisely because Governor Corbett and other Commonwealth officials have been far sighted in developing Pennsylvania’s abundant natural resources. Because of their vision, Pennsylvania is leading the nation toward economic prosperity and energy independence.”

Not only is this project a win for the economy, it’s also a net plus for the environment. Alongside the increased use of natural gas — in Pennsylvania and across the country — we’re also seeing a decrease in overall emissions associated with power generation. The plant itself will be powered by Siemens H-class gas turbines and will utilize state of the art emissions control technology.

According to the Liberty plants financer, Panda Power Funds:

“The two single shaft power trains will make the Liberty plant one of the cleanest, most efficient natural gas-fueled power plants in the United States. In addition, unlike approximately 95 percent of the nation’s generating facilities, the plant will be cooled with air rather than water.”

Even the Obama administration has touted these emission reductions fueled by the shift to natural gas. As EPA Administrator Gina McCarthy explained:

“The pollution that I’m looking at is traditional pollutants as well as carbon. And natural gas has been a game changer with our ability to really move forward with pollution reductions that have been very hard to get out arms around for many decades.”

As the United States continues to use our natural gas resources, greenhouse gas emissions will continue to fall. The Liberty power plant is just another step in the right direction we’re taking as a country toward energy security and a healthier environment.